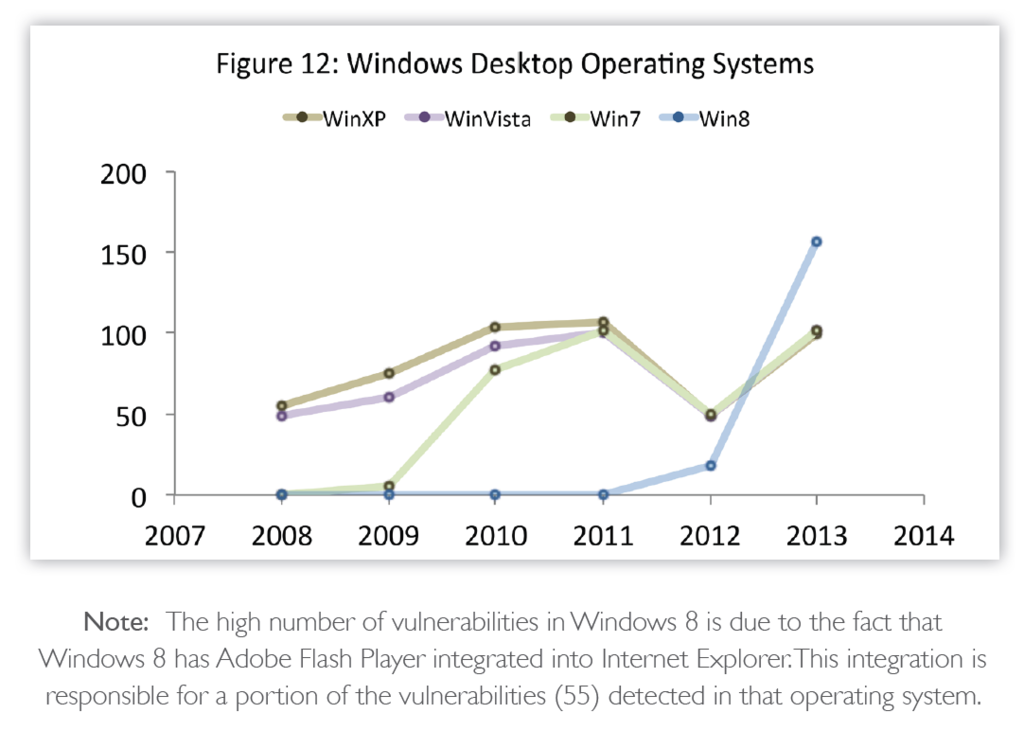 Microsoft’s Windows 8 platform has been tagged by security research firm Secunia as having the most vulnerabilities of any Windows platform on the market. As you can see in the chart above, it’s quite clear that, according to their research, that Windows 8 had more vulnerabilities than previous versions of Windows that are currently supported by Microsoft for 2013.

If you are wondering why Windows 8 tops the charts, even though Microsoft touts the platform as more secure than its predecessors, the answer is quite simple; Flash. Because Flash is now baked into the modern instance of IE, any Flash vulnerability can now be tied into Windows 8 as well.

This is certainly not a trend that Microsoft would like to see but the facts, are well, the facts. When Microsoft announced that Flash would be baked into the modern IE browser, knowing the history of Flash, this exact issue was raised many times.

Seeing that Microsoft is not directly responsible for the Flash code, this means that there is more room for vulnerabilities and the result is the chart above.

Flash has long had a history of being vulnerable and generally an insecure piece of software. With this latest report, it goes to show that Flash is causing Windows 8 to be less secure, in terms of vulnerabilities reported, than its predecessors.

Will this report have any effect on the adoption of Windows 8? Probably not, but it certainly is not helping the platforms image either. Microsoft recently reported that 200 million licenses for Window 8 have been sold and while that is a massive number, it does trail that of Windows 7.

Source: Secunia | Thanks for the tip JamesJD!