With Microsoft's latest update 'Mango', almost ready to be released to Windows Phones worldwide, there has been increased talk recently of the next update for the mobile platform. Earlier on this week, rumours were spreading that the next update, dubbed 'Tango', would only be a minor update launching with a series of low price handsets later this year. It would now appear however, that an early build of the Tango update was up for sale on Facebook. 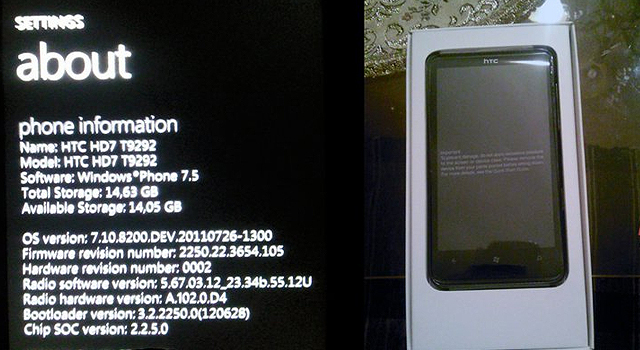 As of this time, it looks as though the item has been removed from the Facebook marketplace, however according to WPCentral the item description was originally:

"HTC HD7 16GB (T9292 Schubert) for sale. You can select from three builds of Windows Phone - 7.0.7392, 7.10.7720 (Mango), 7.10.8200 ("Tango"). The first two are stable and functional build, third is dev build (not stable and to continue with official builds you have to flash it using RUUs). Price starts at 150€, you can contact me on my mail which I have on the forums, only through mail, highest price wins, delivery is not included in the price (only express delivery, not post office). In mail, write down which version of the OS you want, RUUs are not included. All accessories, slovak distribution, arrived today :)"

It makes sense that the Tango update would be primarily minor, given that the following Windows Phone update, dubbed 'Apollo', is being designed for the next series of Windows Phone, potentially opening the door for it to be called Windows Phone 8. After a Tango build was spotted last week in server logs, it's expected that the update will improve the phone's search functionality to include content physically on the device, and voice activated search.

This isn't the first time that some users have decided to profit on private releases. Earlier this year, someone decided to take the opportunity to sell a DVD on eBay with a copy of a Windows 8 build, which was very quickly removed once technology news websites began to report the story.