As Microsoft gets ready to show off its latest vision of the tablet, it is a stark reminder that this isn’t the first time that Microsoft has stood on stage to show off tablet software. 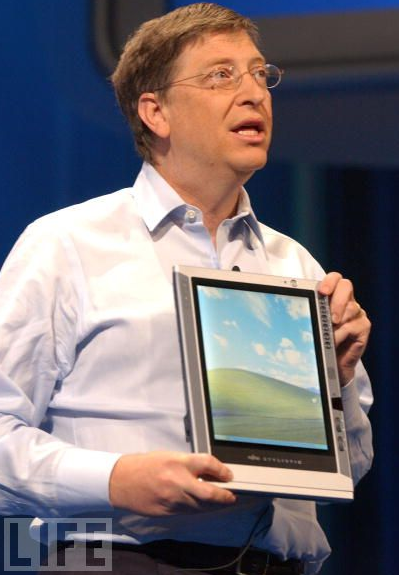 The date, November 7, 2002 in New York City, Bill Gates showed off his vision of the tablet. The software was based on Windows XP and was built around using a pen for input. This introduction was a shakeup to the current market; Microsoft was dropping the traditional keyboard and mouse and opting for a pen to be used for input.

The initial reaction was positive and Bill Gates was bold about his latest creation. In an interview with Businessweek, he said “This is Big, Don’t Doubt me”. Gates knew that the future was away from the mouse and keyboard and that a more natural user interaction was key.

The product looked to be off to a solid start, Microsoft had 7 hardware vendors lined up to create devices and with positive initial reviews, Microsoft surely had another home run on its hands.

By far the most recognizable product to come out from this era is the convertible laptop. While having the ability to function like a standard laptop, you can swivel the screen around and use it like a tablet with a stylus.

The product was good, it had the right vision, but then why are we here again talking about Microsoft getting back into the tablet game?

You can blame many things such as high prices, it being ahead of its time or a stubborn consumer base, but one thing is for sure, Gates knew that tablet computing was huge, unfortunately Microsoft has yet to capitalize on it.

It could also have been that Gates didn’t design a new interface, he assumed that using roughly the same Windows XP UI with a stylus would be satisfactory, unfortunately that wasn’t the case.

Whatever the reason may be, Microsoft never got a solid footing in the tablet market. Their products, even with Windows 7, never gained mass consumer adoption like the iPad has. You can blame a lot of things or you could even argue it was a success since it still has a following to this day, but Microsoft needs a competitor to the iPad and what they currently have on the market will not cut it.

Their first run at creating a tablet craze has sadly failed. Microsoft had the right vision but the wrong implementation. While Apple did create a blockbuster device, they simply scaled up a phone OS to make it happen, not exactly revolutionary in terms of functionality.

So here we are, a little under a week away from Microsoft getting ready to show the world it’s next iteration of its highly popular Windows platform. They have already shown off their Windows 8 tablet interface which is a stark contrast to the tablet software Microsoft showed off back in 2002.

But rather than being the first to market, Microsoft is now well behind Apple and Google. While the game of gaining market share has stayed the same, there are now considerably more players in the field than in 2002.

But what does Microsoft have now that it didn’t know in 2002? It knows that the UI must be different than the traditional desktop. The new UI clearly shows off the touch friendliness of the product and like Apple, they are building an ecosystem around their products.

Windows 8 will be shown off in more detail next week and Microsoft is expected to give out Windows 8 tablets to the developers that are attending. With Microsoft’s next vision of the tablet about to be in consumers hands, Microsoft is about to re-enter the tablet market, for a second time.

Sure, many will argue that they never left, but the iPad has decimated any sales of existing Microsoft tablets, and even Ballmer has admitted that the “Apple Has Sold More iPads Than I'd Like”, but you can’t change the past.

As Microsoft looks to sell Windows 8, they will be entering a crowded market, but don’t worry Microsoft fans, they know what to do. Remember when Microsoft created the original Xbox, they were late to the market too, but look at the Xbox 360, it now leads the market…they can win the market, but they must be firing on all cylinders to do it.