Over 7000 websites in the European Union have launched a protest, dubbed 'EU Slowdown', in an effort to save the principle of net neutrality and enshrine it into Europe’s laws. The protest will run until July 18th.

The EU Slowdown protest is being organized and supported by the Fight for the Future foundation and other non-profits, which argue that Europe is heading for a divided internet, where traffic is directed based on whether and how much the user pays the ISP. Some readers may correctly point to last year’s developments, when the EU finally agreed to net neutrality and proposed it as a law. But that law, even at the time, was viewed as a barely workable compromise, that only paid lip service to net neutrality, while leaving numerous loopholes for companies to take advantage of. The situation has not improved since, and now is the last chance the public has to express their view on it – hence the protests. 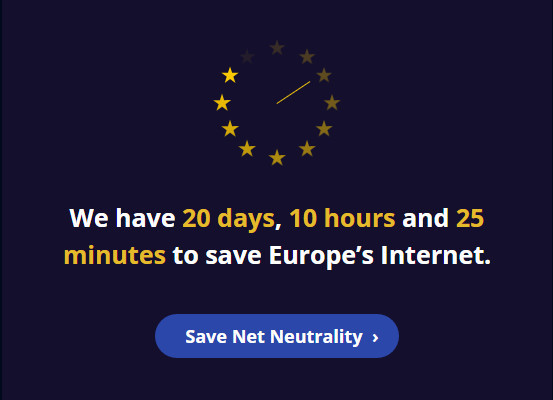 Net neutrality is a contentious subject, one that you may heard of before, even if you can’t exactly explain what it is. The simple explanation of this concept is that internet service providers don’t get to pick and choose which data moves through their network faster or slower. In other words, your Netflix and your e-mail and your banking apps and your adult content is all delivered the same way, without any of it getting preferential treatment.

This concept underpins the entire internet and its infrastructure but companies, internet service providers and some governments believe that creating “slow” and “fast lanes” online is the key to delivering better internet and services to users. They are also the ones who would gain the most money and power from such an arrangement so you might want to take their claims with a bit of salt, lime and a shot of tequila.

So what’s wrong with the EU law? It says that companies do have a right to manage traffic and limit some of it to “prevent traffic congestion”. Meanwhile the ISPs' only obligation is to ensure “the general quality of internet access services”. Those two ultra-vague statements leave the door wide open to service providers manipulating traffic to suit their needs. Don’t feel like investing in new infrastructure? Limit Netflix bandwidth. Too much traffic flowing through the pipes? Ban torrent downloads. After all, these measures would help “ensure the general quality of internet services”.

As things stand, many consider the situation far from ideal, given that companies have a lot of leeway over how they can control users’ traffic. The law does state that traffic management measures must be “reasonable”, but then fails to define what reasonable means. And having a court interpret it is definitely a possibility, but how many people are willing to use their money to sue ISPs for bad internet?

That’s why, if you agree that the EU should have a much stronger law for net neutrality, you can submit your own comment here, and that’s the reason why you may see the EU Slowdown logo – an EU flag with a loading sign – on a number of websites protesting these laws.