When Adblock Plus launched in November for the Android platform, it gained a lot of praise from users as it was able to block ads at web and app level. But Google took exception to this and started to remove any and all Adblocking apps from their Play store, stating they violated section 4.4 of its Developer Distribution Agreement. 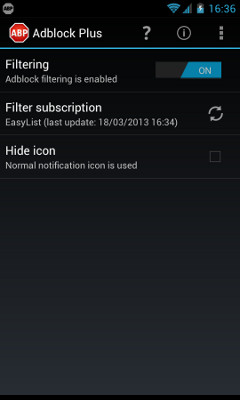 Well now, the app is back in with a firm middle digit pointed at Google, although you will need to side-load the app to avail of it’s features and functionality.

After Google's removal, you can download Adblock Plus for Android here: adblockplus.org/en/android-ins…

When Google argued that the Adblocking applications interfered “with or access another service or product in an unauthorized manner,” the Electronic Frontier Foundation was unimpressed. At the time they said:

[The move] demonstrates that Google is willing to censor software and abandon its support for open platforms as soon as there’s an ad-related business reason for doing so.

Adblock Plus posted a blog saying they were shocked by Google’s actions, but that a new version of the app would soon be made available. Well, that day has come. And even though the app’s noticability will be less, now that it’s not on the Play store, Adblock Plus are asking previous downloaders to manually install the app – it comes with automatic updates for future versions.

Source: The Next Web | Image courtesy of Adblock Plus