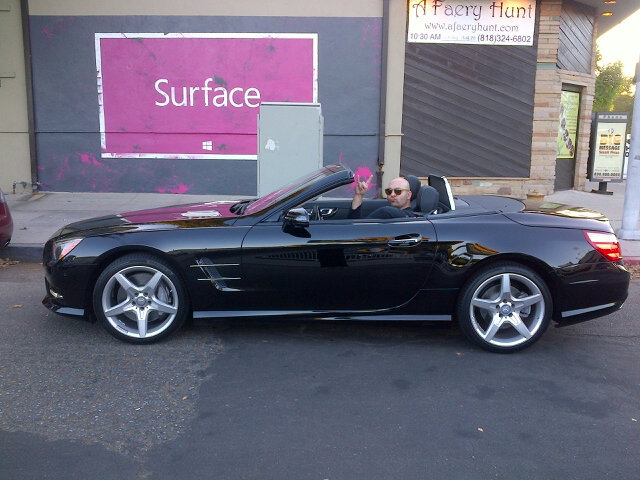 Earlier this week, "street art" began to mysteriously appear in parts of New York City that seem to be a part of a viral marketing campaign for Microsoft's Surface tablet. They first showed up in the Brooklyn section of the city and later painters were spotted creating the ads in Manhattan.

Now it looks like the ads are popping up 3,000 miles away in Los Angeles, California. A Twitter image was posted by Ahmet Zappa showing one of them on an unidentified building. Yes, that Ahmet Zappa, the son of Frank Zappa and the brother to Moon Zappa and Dweezil Zappa. Ahmet is a rock singer, actor, writer and movie producer (his company, Monsterfoot Productions, helped to create the recent family film The Odd Life of Timothy Green).

Love seeing #surface in the wild...go microsoft go! I think they are bad ass...I'm such a dork for this stuff. twitter.com/AhmetZappa/sta…

Another of Zappa's Twitter posts said, "Saw some very cool #MicrosoftSurface street art in LA today on the side of buildings...it was awesome! I can't wait for a SURFACE device "

So far, Microsoft has not offered any comment on these street art images for the Surface, but its appearance in LA means that we could see them pop up in other parts of the US very soon.