Since Apple’s WWDC preview back in June, the Apple community has been eagerly awaiting the next version of Mac OS X to hit the Mac App Store – and today we can finally say that it is here: Apple’s Mac OS X 10.7 Lion is now available. The upgraded Mac operating system will set you back US$30 for the upgrade and comes in at around 3.5 GB for the download; tomorrow we should be seeing Lion Server also available for US$50. Initially Lion will only be available through digital download ahead of a physical disc launch at stores in the upcoming days. 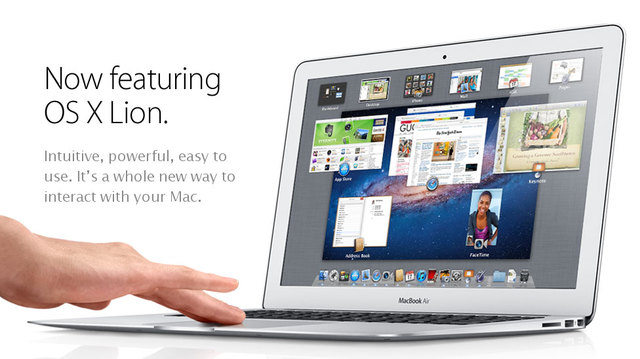 Apple has also launched a new line-up of MacBook Airs with Thunderbolt ports, updated "Sandy Bridge" processors and a back-lit keyboard. The 11.6-inch base model now comes loaded with a 1.6 GHz Intel processor, 2 GB of RAM and 64 GB of on-board flash storage. The 13.3-inch model also sees similar upgrades: base model comes with a 1.7 GHz Intel CPU, 4 GB of RAM and 128 GB of storage – both models can be upgraded to include a 1.8 GHz CPU, 4 GB of RAM and 256 GB SSD space.

Also new to the Apple Store today are an updated line-up of Mac Minis, which have completely removed the DVD drive. The base model will now come with a Intel “Sandy Bridge” 2.3 GHz processor, 2GB of RAM and a 500 GB hard drive; this can be bumped to a 2.5 GHz CPU and 4 GB of RAM if you so desire. There is also now a server model loaded with a 2 GHz CPU, 4 GB of RAM and dual-500 GB HDDs.

To complement the new Mac Minis we are seeing new Apple Cinema Displays, now known as "Apple Thunderbolt Displays". While there are no major changes to the actual LED panels, you should be able to connect your Thunderbolt-equipped Mac directly into these new Thunderbolt-enabled Cinema Displays and mount them using the optional VESA wall mount.

Check out the online Apple Store and website for more info on all of Apple's recently released products.