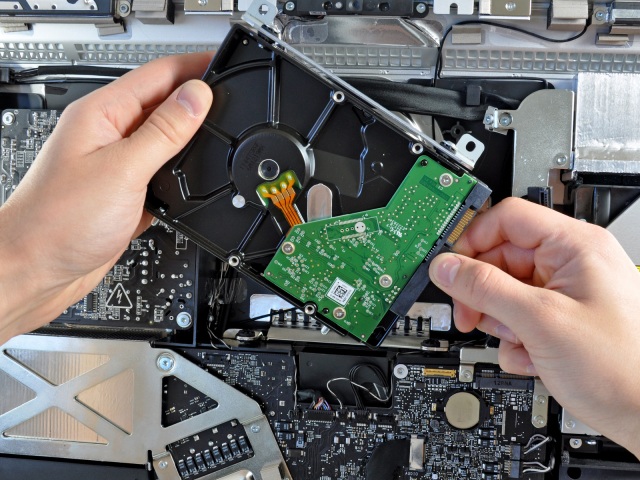 What seems to be a trivial task on almost any modern computer, desktop or laptop, all-in-one or standard towers, becomes more than a void warranty on the latest line of Apple's iMacs. Apple can be slightly forgiven to a certain degree for going proprietary on some of the iMac's internal components as they're trying to stuff together a reasonably fast computer with a thickness not much greater than large monitors. Regardless, their reasoning for modifying the hard drive connectors is a bit off. Furthermore, these hard drives are absolutely non-serviceable. If you were thinking of replacing the main hard drive OS X is installed on after buying it - unless you go through Apple, tough luck.

The discovery was made by Other World Computing, a third-party Apple hardware depot and service center. They noted that Apple had a habit of changing the method the iMac used to detect how hot the internal hard drive was. For iMacs prior to late 2009, sensors were taped onto the drive itself. From late 2009 onwards until now, the iMacs had their own special thermal sensor cable that connected only to a small handful of drives that had this feature. A limited selection, but still a selection for aspiring users nevertheless.

This time, Apple completely changed the thermal sensor itself. As OWC explains:

For the main 3.5″ SATA hard drive bay in the new 2011 machines, Apple has altered the SATA power connector itself from a standard 4-pin power configuration to a 7-pin configuration. Hard drive temperature control is regulated by a combination of this cable and Apple proprietary firmware on the hard drive itself.

We are not sure what OWC means by a "standard 4-pin power configuration," as that may imply the old 4-pin molex connectors that have long been phased out of SATA hard drives. Upon closer inspection of the above iMac Western Digital Caviar Blue hard drive from iFixit, it appears to sport the same 7 pins for the SATA cable and 15 pins for the power cable. One may assume in this case the only proprietary modification Apple made was to the drive's firmware.

Due to these modifications, the hard drive fans will spin at maximum speed if the drive is disconnected or even moved from its internal bay. In addition, any replacement hard drive will cause the fans to spin at maximum speed, and will cause a failure in the Apple Hardware Test. Also amusing to report is a recent iMac EFI update that enables SATA 6 Gbps speeds, speeds that are far beyond the reaches for the large capacity mechanical drives that come standard with the iMac.

With these modifications in mind, one has to wonder: what was wrong with using the SMART temperature sensors that come standard on almost all hard drives in the market? Why did Apple find it necessary to use custom firmware for a computer part that is known to fail after a few years of heavy usage? Why are users restricted from using hard drives greater than 2 TB as their main OS X drive?

Thanks Mephistopheles for the tip on the forums!