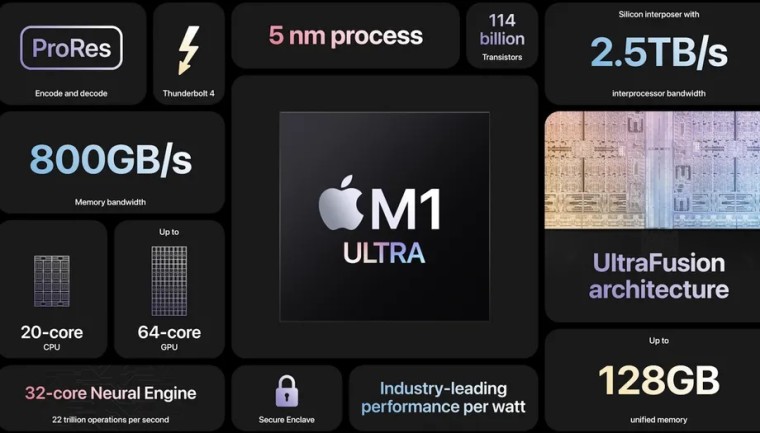 Apple has announced an entirely new class of devices, called the Mac Studio. It is a powerful desktop computer running macOS and basically comes in a compact form factor which is about the size of a Mac Mini. However, this Small Form Factor (SFF) Apple PC packs the new M1 Ultra SoC, which is, by far, the most powerful combination of CPU, GPU, and RAM than what Apple is currently offering.

There’s a new “generation” of Apple Silicon chips. Called the M1 Ultra, these new chipsets are based on Apple’s UltraFusion architecture. Needless to add, the newest member of Apple’s M1 chipset lineup is way more powerful than the M1, M1 Pro, and M1 Max chips.

The Apple M1 Ultra SoC is essentially two separate M1 Max chips clubbed together on a single, humongous chipset. The SoC exists primarily because of the fast 2.5TB/s inter-processor connection within the M1 Max SoC. As there are two M1 Max chipsets, almost all the specifications of the new SoC are essentially double that of a single M1 Max chipset.

The Apple M1 Ultra chipset packs 20 Cores, 64 GPU Cores, and can feature as much as 128GB of RAM. The new Apple Mac Studio will be the first series of computers to feature the M1 Ultra chipset. However, Apple could embed the powerful chipset within other macOS desktops in the near future.

Apple is quite confident about the new M1 Ultra chipset. Presumably hinting at Intel’s latest CPUs, the iPhone maker reportedly claimed its new CPU can outperform a “16-core PC desktop” while using 100W less power, along with comparable GPU performance than the “highest-end discrete GPU” while using 200W less power.