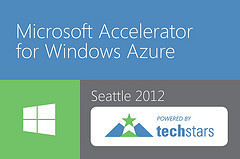 As part of the BUILD 2012 developer conference, Microsoft held a briefing for the press where they talked about their Windows Azure Accelerator program. As we reported in October, Microsoft and its partner TechStars have picked 10 startup companies to participate in this program.

The 10 startups are now working in Microsoft-provided buildings in the Seattle area to develop their products, which will gain free access to Windows Azure cloud-based services, along with other tools and mentoring from Microsoft team members. In January, the 10 startups will pitch their final product demos to angel investors in hoping of gaining funding.

Three of the startups were at the panel at BUILD 20102 to talk about their plans. One is called BagsUp, a team with members that came from Australia. They plan to offer an online service that will connect people to their friend's travel experiences. This service should, in theory, provide users with more accurate information about hotels, travel destinations and more rather than having to check out reviews from people they don't know.

Another Windows Azure Startup Accelerator program company is Mobilligy. Their program, if it gains traction, will offer people a way to pay all of their monthly bills via just one mobile phone app. The company plans to put in features such as alerts if a bill is close to being due and can even stop payment if the app senses there is not enough money in an account to pay a certain bill.

The third company at the panel was Socedo. This startup wants to help sales and marketing divisions of companies help to find new customers and leads via social networking tools such as Twitter.

One of the benefits of Windows Azure for these three companies, as well as other small startups, is that they can create cloud-based services without having to purchase hardware themselves. Windows Azure can also be flexible enough so that those companies can add new features and servers to meet their needs.

It will be interesting to see if any of these 10 Windows Azure startup companies rise up to become the next big tech companies based on the help that Microsoft gave them with this program.