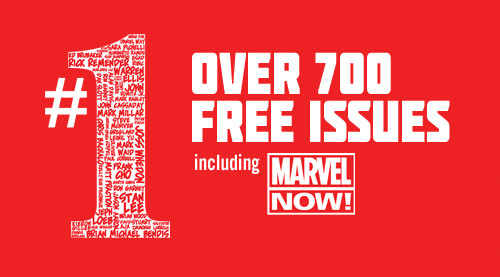 The folks at Marvel Comics just launched an offer that has the servers at the ComiXology digital comics service dealing with a massive amount of traffic. A few hours ago, Marvel announced that for the next two days it will let users of ComiXology download over 700 issues of Marvel comics for free.

That's the good news. The bad news is as soon as that offer was revealed earlier today, the ComiXology servers couldn't deal with the flux of comic book fans who were wanting to download all those free issues, either from the ComiXology website or via one of the service's many apps, including the Windows 8 app.

Now back to your regularly scheduled server-mageddon! Don’t worry, we’ve got Top Men working on it. #TopMen twitter.com/comiXology/sta…

The massive free digital comic book offer was just one of many announcement similar announcements Marvel Comics made this weekend. It also launched a new iOS app for its Marvel Unlimited service, which allows users to read tens of thousands of older issues for one monthly fee. Marvel plans to add sound and music to some of its digital comics later this summer.

Update: The website seems to be slowly coming back online; keep in mind that the free comic book offer from Marvel will last until the end of the day on Tuesday.