Creative used to make PMPs that were the iPod’s primary competition its heyday. The Creative Zen Touch was the last device they made that really made any kind of waves in that market-saturated sea, and we haven’t seen anything else from Creative that tried to take a serious stab at the market share domination that Apple currently enjoys. Well, Creative is about to jump on the Android bandwagon to try and revive their PMP line. 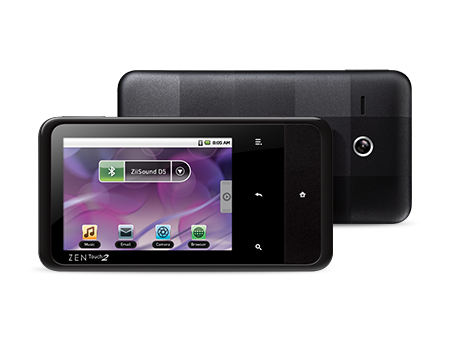 According to Engadget, The FCC just finished certifying the Creative Zen Touch 2, an Android 2.1 powered PMP with a 3.2 inch resistive touchscreen, b/g/n WiFi, Bluetooth, 2MP camera and an FM radio tuner. It’s an interesting if predictable move by Creative, as they wouldn’t be the first to try and use the Android OS in a PMP. Archos is doing it, Samsung is going to announce their galaxy Player at CES 2011 (stay tuned for full Neowin coverage of that), and manufacturers will likely gobble up the free OS for use in multiple attempts to dent the iPod’s market share.

What’s notable about Creative’s offering is how expensive it will be considering the specs. Engadget reported a while back that the device will break the $200 mark, which is basically unheard of for a basic PMP that isn’t an iPod, or that has more than 32GB of built-in memory. Let’s compare: Apple is offering an 8GB iPod Touch with a current OS, a high-quality “retina” capacitive touchscreen and dual cameras (with the rear camera offering 720p video recording). This is all for $229. Creative is selling a Zen Touch 2 at the same storage capacity, with an inferior 3.2 inch resistive touchscreen, an outdated version of the Android OS (no word if it will even have access the Android Market; typically, Android PMPs do not), one camera, and, according to Engadget, cheap build quality, for around $230 (£149 at the Creative website). According to our math, it just doesn’t add up. In a soon-to-be saturated Android PMP market, price wars will be critical, and Creative is definitely not setting out on the right foot at these prices.