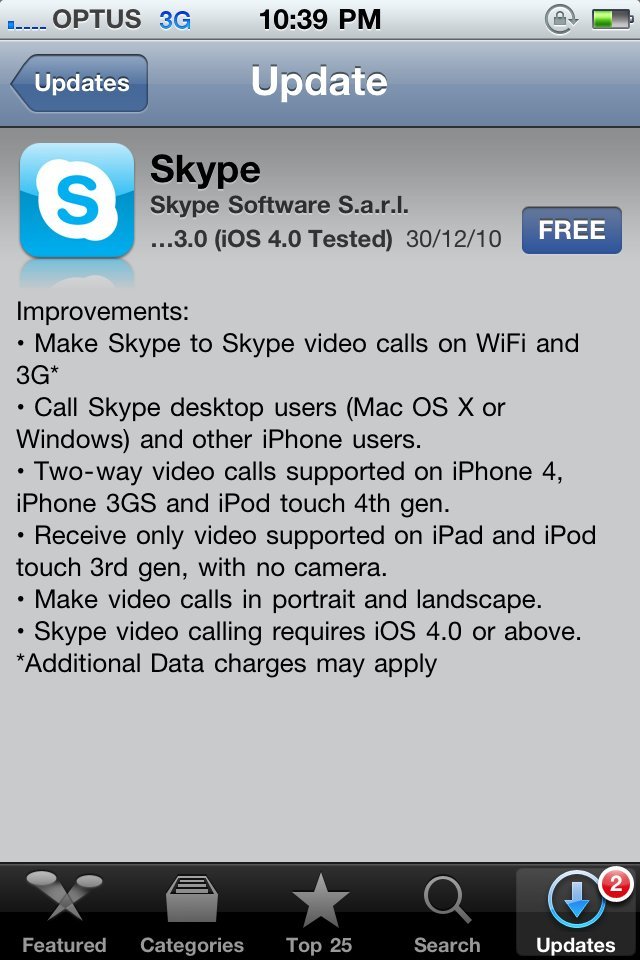 In a move that will surprise very few people, Skype has updated its iOS app to support mobile video calling.

Today's announcement, accompanied by an app version bump to 3.0, was widely expected to be made next week at CES, but it appears the Luxembourg-based company simply couldn't wait that long, or was perhaps keen for some good PR following last week's global outage. While mobile video calling seemed a natural progression for Skype's iOS client following the release of the iPhone 4 and fourth-generation iPod touch, the first sign that such functionality was on the way appeared last week in a support document on the company's website, followed by a series of teaser videos and tweets.

In terms of features, the updated iOS client packs no surprises, allowing iPhone 3GS and 4 and fourth-generation iPod touch users to make and recieve video calls among each other and with Skype users on PC, Mac and Linux. iPhone 3GS owners are able to use the phone's rear camera for video calling, while iPad and third-generation iPod touch users can receive video only.

Video calling is, as with the desktop service, free and works over 3G and WiFi, though early testing by Engadget suggests the 3G video calling experience is far from ideal. The site also noted that video calling will take a heavy toll on an iOS device's battery, with levels dropping around five per cent after just 10 minutes of use. Video quality over WiFi appears on par with that provided by Apple's built-in FaceTime functionality, though the ability to video call over 3G will obviously give the Skype app at least a slight edge.

The Skype 3.0 app is now live on the App Store and the company has released a promo video to show off its video calling functionality. A quick word of warning - don't hit play if you're offended by bad dancing.