Way back in June 2012, when Microsoft gave us our first glimpse of Windows Phone 8, it promised that "registered enthusiasts [would] get early access to updates before [a] broad consumer push". Later that year, in August, further details emerged, albeit unofficially, of how that might work in practice. But since then, there's been no news, no official announcement, nothing. 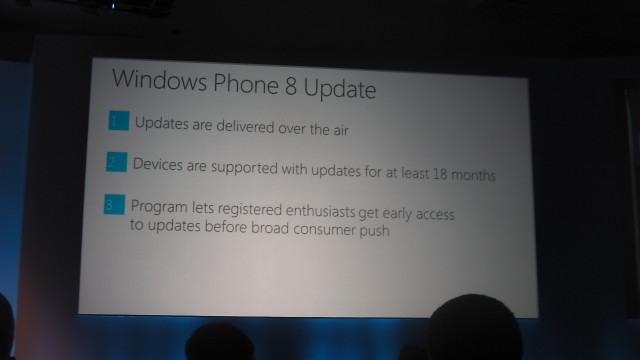 Microsoft has finally announced the Developer Preview Program for Windows Phone, and the best news of all is that it's launching later today. The company says that the purpose of the program is to give devs "early access to our operating system updates so they can verify that their apps work as expected on the new code". In practice, the program is open to pretty much anyone that wants to sign up.

In order to access the Windows Phone preview program, you'll need to meet one of these pre-requisites:

That means that, while the program is ostensibly intended for developers, anyone who has signed up to use the free Windows Phone App Studio - with which Microsoft said that "anyone can build an app" - can also sign up for early access to OS updates. That also means that you can get access to the newly announced Windows Phone 8 Update 3 today, without having to wait for carrier approval!

However, before you jump in, there are a few important notes to consider. First, Microsoft will only be providing early access to its own operating system components; that won't include firmware or driver updates such as the upcoming 'Bittersweet Shimmer' package from Nokia. Your handset's current OS build must be 8.0.10322.71 or higher, along with the corresponding device drivers.

Additionally, you will only be able to upgrade the OS on your device; there is no way of rolling back to an earlier build once installed.

Finally, and most importantly, Microsoft warns that installing a preview update is likely to void your device warranty, so you should think very carefully about whether or not to install an update preview if you're not technically equipped to deal with any issues that may arise.

Microsoft added that it will make emulator images available for Windows Phone 8 Update 3 "in the next three weeks". The good news for developers is that the company has not made any API changes with this update, so apps should run just fine without any significant changes, although devs may want to optimise layouts for larger 1080p displays.