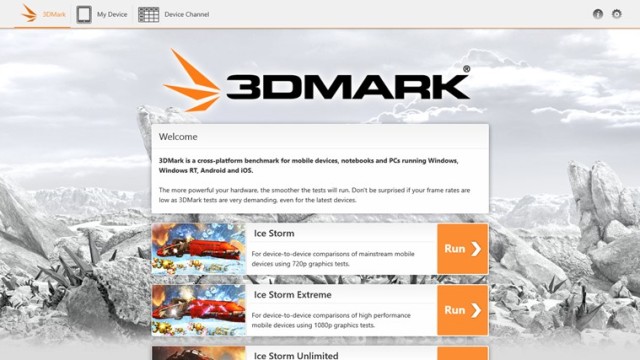 In February, Futuremark released the first version of its 3DMark benchmarking software made to work with PCs that had Windows Vista, 7 and 8 installed. Today, the company launched a version of the software in the Windows Store that not only works on Windows 8 but on Windows RT as well.

The Windows Store page for 3DMark shows that the free Windows 8/RT version has three benchmark tests:  Ice Storm is a DirectX 11 feature level 9 benchmark test that uses fixed off-screen rendering at 720p but can scale to fit the native resolution of the Windows RT device. Futuremark says "Ice Storm includes two graphics tests designed to stress the GPU performance of your device and a physics test to stress its CPU performance."

The Ice Store Extreme test brings the resolution up to 1080p and also offers better textures and post-processing effects. Finally, Ice Storm Unlimited allows for device processor comparisons by doing away with vertical sync, display resolution scaling and other factors.

Futuremark also has released free versions of 3DMark for Android and iOS. However, it appears that only the 3DMark version made for Windows Vista, 7 and 8 comes in two additional paid versions with more features. We have emailed Futuremark to see if this new Windows 8/RT build will be offered with those two other versions in the future.