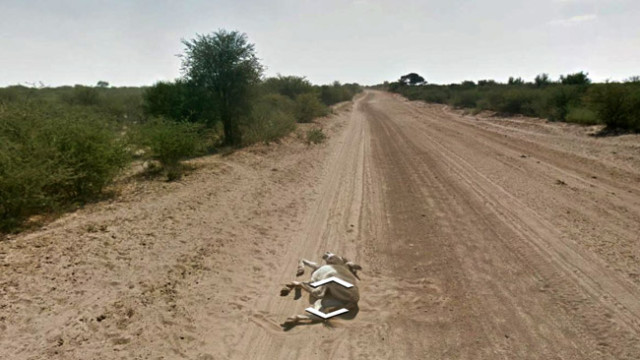 Google Street View cars are roaming all around the world, taking pictures to make it easier for you to navigate the roads. Heck, they’ve even mapped out part of the South Pole in case you ever find yourself down there on vacation.

But what happens when animals are in the road when Google’s car is driving around? Based on an image by Twitter user @TheRealSheldonC, the car may ignore the livestock and simply run them over. News.com.au posted images showing a donkey lying on the ground between two tire tracks, indicating that the animal may have been hit and killed by the car. Google, on the other hand, is saying that the animal was rolling around in the dirt before jumping up and out of the way of the oncoming vehicle, and states that the donkey was unharmed.

What’s your take? Is Google telling the truth and the donkey was playing on the dirt road before getting up and moving? Or did the Google car driver play some real life Grand Theft Auto and run the donkey down?