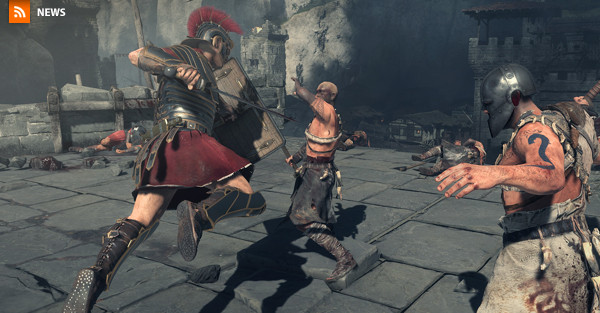 It was a game that was first announced back in 2009 with the title "Codename Kingdoms" and later renamed to "Ryse" in 2010. Now developer Crytek and publisher Microsoft are finally bringing "Ryse" to the gaming fans in late 2013, but this time as an Xbox One launch title.

We got to play a tiny part of "Ryse" at Microsoft's E3 2013 booth on Tuesday. The character you will be controlling is named, Marius Titus, a soldier in the service of the Roman Empire. As our demo began, he was rallying his troops to go after the barbarian horde that was staging an invasion of a Roman city.

The game demo actually began with our hero plunging into the horde of barbarians. You stage attacks by using the "A" button on the Xbox One controller, while the "X" button blocks attacks with your handy shield. Sometimes you can start some "God of War"-like combo moves, with the game telling you which button to press ahead of time.

There was one sequence which saw Titus led his soldiers to storm the fortress while enemies fired flaming arrows at them. In this sequence, Hitting the "X" button puts the soldiers in defensive poses with their shields while the "A" button launched the solders' own set of arrows at the barbarians.

While the demo was pretty short and sweet, it's clear that Crytek has been working hard to get the CryEngine 3 graphics platform up to speed on the Xbox One. There are a ton of incredible lighting and art effects in the game, and there is so much detail that you could miss everything that is going on around you the first time you play it. You can see other characters in the distance fighting and dying on their own and the flame and particle effects are so realistic you can almost smell the cinders.

In terms of gameplay, the folks who have played "God of War" will be happy with this game, with its combo system and its general sense of hacking and slashing your foes. This appears to be a realistic take on the genre; there are no Roman or Greek gods to take out. There's no word yet on what multiplayer features "Ryse" will have, and Microsoft is not talking about its Kinect features.

"Ryse," based on our quick demo, is certainly a great looking game and the brief gameplay in our playtime was a lot of bloody fun. It remains to be seen if Crytek can launch yet another huge game franchise as they did with the Far Cry and Crysis series.

Images via Sony, Microsoft and Paramount