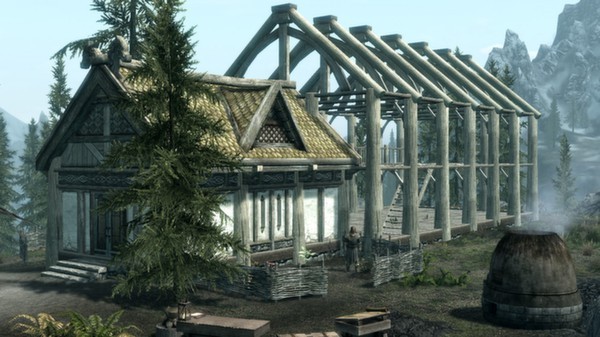 If you are still playing The Elder Scrolls V Skyrim, you are not alone. Bethesda Softworks' hit open world fantasy RPG continues to be extremely popular since its 2011 launch, especially among PC users who have used the game's mod tools to make and extend the game's content.

Today, a new and official DLC pack for the game has been released for PC owners that will give players a lot of activity for a low price. It's the Hearthfire DLC pack and you can now download it on Steam for just $4.99.

The DLC pack is not about fighting dragons or vampires this time but rather takes your character on a more domestic journey. The Steam page says:

With this official add-on to The Elder Scrolls V: Skyrim, you can purchase land and build your own home from the ground up - from a simple one-room cottage to a sprawling compound complete with an armory, alchemy laboratory, stable, garden, and more. Use all-new tools like the drafting table and carpenter’s workbench to transform quarried stone, clay, and sawn logs into structures and furnishings. Even transform your house into a home by adopting children.

It's not all fun and games at home. The Hearthfire DLC packs also gives the new land and home owners some challenges such as fending off attacks from "kidnappers, armed bandits, and skeever infestations." You can even hire some people to help with some of the chores.