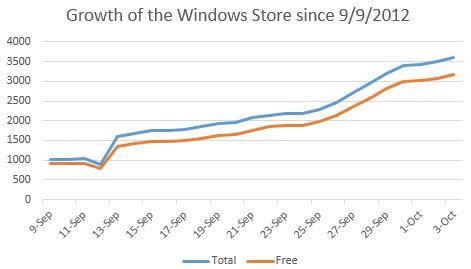 A few days ago, McAkins Online reported that there were 2,371 Windows 8 "Modern" UI apps available to download in the Windows Store. Now another third party site claims that the number is in fact much higher with just about three weeks to go before the official launch of Windows 8.

The WinAppUpdate.com site reports that, as of Wednesday, there are now 3,610 Windows 8 apps that can now be downloaded, either for free or for a fee, in the Windows Store feature. The report adds that about 88 percent of the apps in the Windows Store are free; Microsoft has yet to confirm any of these numbers from these two sites.

Not surprisingly, the US English Windows Store has the largest number of Windows 8 apps, with 2,420 currently available. Games take up 20 percent of that number, with Entertainment apps at 13 percent and Tools apps at 10 percent.