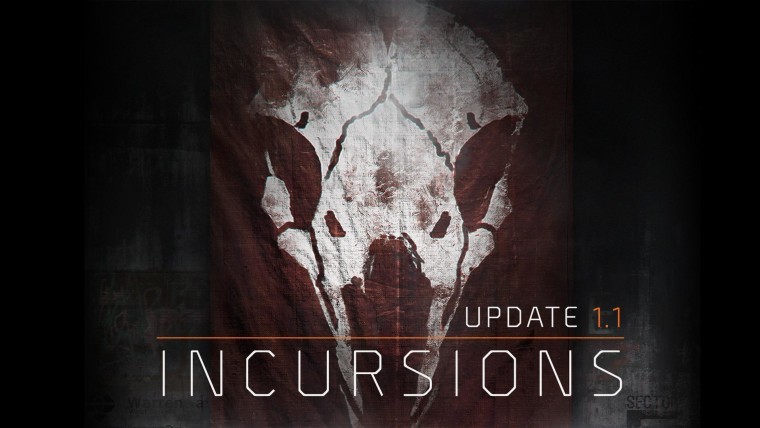 Tom Clancy's The Division launched just over three weeks ago. Since then, many players have reached or are reaching their maximum potential in the game in terms of gear acquired and challenging missions completed. While Ubisoft Massive pushed a small update a while back that tweaked the game's Dark Zone, there hasn't been any truly new content to play, leaving some experienced players a bit bored at times. The good news is a major update is on the way for The Division and we have all the confirmed details on what players can expect from the game's 1.1 update.

Let's take a look at what The Division's "Incursions" (update 1.1) will offer players:

Incursions: Like World of Warcraft or Destiny's "raid" challenges, incursions are very challenging end-game missions for The Division that force a squad of four players to triumph over more difficult enemies and a crazy-tough bosses. With incursions, players will be required to consider tactical approaches to the toughest encounters ever in the game which may or may not have a heavy emphasis on damage-dealing. Enemies in incursions are much more varied in terms of placement and difficulty, so while other challenging missions allowed for groups to hide or "turtle" and force AI enemies to approach the group for easier killing, incursions will force the squad to actually push through the crowd and be ready for good cover areas to go bad in a hurry.

Loot trading: Players will be able to trade loot acquired from a boss that was killed while in group. This means if you get a high-end drop but have no need for it, you can give it to another player that does need it. To do this, players will have to travel to safe areas scattered throughout the DZ in order to offer a trade. You'll have two hours from the time the boss drops the loot to trade before the item is permanently in your inventory and becomes non-tradable.

Gear sets: Like many other RPGs, gear sets are coming to The Division. Gear sets are acquired throughout The Division, including incursions, challenging missions, Dark Zone encounters and crafting blueprints. Equipping a certain number of set gear items opens up greater bonuses than your typical high-end gear. These items will appear light green when they drop (not the same green as low-level items) but aren't always a guaranteed upgrade for players that already have tailored high-end gear. These set pieces will be better than your typical high-end drop, but offer specific talent bonuses that will likely be more helpful for group settings, so rogues may or may not always benefit from this type of gear.

New guns: While Ubisoft Massive didn't specify what exactly we'll see, update 1.1 will bring about new weapons that players will want, and they will be very powerful, so wielding one of these could give you an edge in other areas of the game.

Matchmaking: Incursions will have matchmaking, but there are some caveats. Gear score is coming in to play with this update and these difficult missions will have two difficulty settings: hard and challenging. Hard incursions will have a gear level recommendation, which is determined by the quality of your gear and will be displayed in the lower-right corner of a player's inventory screen. To start, players are recommended to have a gear score of 150 for hard mode. If you want to match-make for a challenging incursion, you MUST have a higher gear score (exact score was not specified during reveal). This means that if you don't have the gear, you cannot do the incursion on challenging mode, at least via matchmaking.

No respawns, ever: Ever say "when does the challenge begin"? You will in incursions. Not only is the new content going to be very difficult, you will not get any help from a checkpoint to resume progress. If your team dies in an incursion, you start from the beginning. Destiny players might recall Nightfall missions, where group death resulted in returning to orbit and starting from scratch. Same deal here, but incursions are expected to be longer missions, so don't die. The risk and difficulty are high, but the rewards are equally high according to Ubisoft Massive.

No limit to incursion runs/rewards: Incursions within The Division are considered weekly challenges. You can run them multiple times, but your best rewards come the first time you complete the incursion. If you have multiple characters to play on, you can run the incursion with each character and reap the weekly benefits once per character. After you've done your weekly incursion, all future incursions, like challenging missions, will offer lesser rewards. They'll still be great rewards, but you won't see things like the new raid set gear drop as often.

Dark Zone "supply drops": Getting a little bored of crushing players in the Dark Zone or are you still wishing for conflict in the game's most dangerous region? Supply drops are going to shake things up. Every hour or so non-contaminated supply drops will be dropped from the sky into the DZ. These drops contain high-level rewards but will be surrounded by enemy AI. These drops will be advertised, so other players will be running toward them. Expect to enter rogue status if there's anyone else in your DZ as the rewards are first-come, first-serve. Since the supply drops is not contaminated, you will not need to extract the items received from the drop and they cannot be forfeited upon death. Oh yeah, groups don't have to fight for gear - your entire group gets something.

Death camera changes: You no longer are stuck on that boring death camera when you do go down. If you're dead, you can still spectate players in your group. You can't free-roam with your death camera, but you may be able to help your squad out by watching what's behind them or calling out flanking enemies.

Daily/weekly assignments: new assignments handed out will have players completing tasks for various rewards, which are said to include phoenix credits, division tech and possible gear-related rewards.

The 1.1 update will be available for download starting April 12. The Division's first incursion is called "Falcon Lost" and features enemies from the Last Man Battalion (LMB), the faction once lead by Colonel Bliss and seen more in the later stages of the leveling process within the game. This first incursion will take place underground. "Falcon Lost" is the first incursion of many to come. Ubisoft didn't mention anything more on when future incursions will be coming to the game but did say that every incursion will be unique from any other.

Ubisoft Massive went out of the way multiple times to mention that incursions are not for your under-geared or weaker-skilled players. Because of the level of difficulty and the team coordination required, you will need to team up with good players that have good gear and are capable of communicating and coordinating. Players that step into an incursion without any strategy are already doomed.

Players will also get some teasers about what's going on in the world of The Division if they pay close-enough attention to chatter happening during this first incursion. No spoilers were given, so we'll all have to play the new content to find out what they were hinting at in today's update overview, but the way the developers talked during the live feed made it sound like the effects of "Dollar Flu (green poison)" are being felt outside of New York City. We know more content that expands the game is coming, perhaps the viral outbreak isn't isolated to just NYC?

If you want to view Ubisoft Massive's Twitch stream that covers all of the details mentioned here and see a little snippit of Falcon Lost, head over to the official "TheDivisionGame" Twitch page and view the Special Report video from today, March 31. The video is just over an hour long.