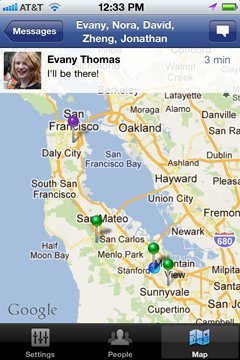 Facebook's revamped messaging system today received a new boost in functionality with a separate mobile app. Messenger is available for iPhone and Android, and makes use of the device's location and camera features to enable users to share additional data with each other. The app's main goal is to simplify mobile messaging by bringing together multiple methods into one single interface.

Messenger brings together Facebook friends and text messaging contacts from your address book into one list. Messages get sent to both Facebook and mobile phones, with the idea that people will be able to see the message much quicker. Multiple people can be added into a single conversation, and if participants approve it, the members of a chat can all be plotted on a map. Potentially, the group chat map will solve the issue of trying to arrange an outing by giving the user an immediate overview of where everyone currently is.

Members of a chat can also share photos with each other. The example given by Facebook is a friend telling everyone in a group chat that he is at the aquarium by sending a photo of one of the dolphins to everyone present. Photo sharing is nothing new to Facebook, but being able to share photos in a much faster way is sure to resonate with fans.

Facebook Messenger can be downloaded here. Currently, the app is only available in the US and Canada.