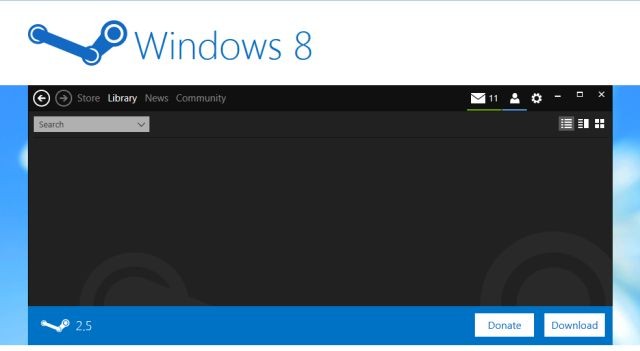 Several months ago, long before the official launch of Windows 8, a member of Neowin's message board forums, "BoneyardBrew", released a new skin for Valve's Steam download client that turned it into the "Metro" UI that Microsoft put into its latest operating system. The Steam Metro skin became a big hit with Neowin community members, and indeed outside the Neowin website, and since then he has made a number of improvements to the skin.

This week, "BoneyardBrew" released version 2.5 of the Steam Metro Skin on his DeviantArt page, with a number of improvements and additions. We wanted to learn more about the development of this popular Steam skin and asked him if he could answer our questions. The interview was conducted before the release of the new 2.5 version.

First, can you tell us a little bit about your background as an artist?

I was introduced to computers by my dad at a young age. I primarily played games, but once I reached my teens I dabbled in Photoshop doing mostly photo manipulation. It was in 2009 that I met Josh (SoapyHamHocks) on Neowin when he offered to help me with my first Firefox theme based on Mozilla's browser mockups. I was still an amateur at Photoshop and found Ben's (SpewBoy) theme surpassing ours in quality. Despite this, it still reached a massive level of success and remains one of our most popular in terms of downloads and views. Josh and I have continued to work together and we have both improved in our fields by continuing to release new themes and other projects on the side.

How did you come up with the idea of creating a skin for Steam that used the Windows 8 Modern interface?

I was an avid user of the Zune Desktop Software years ago, with the design drawing me in. The fluid animations, the great use of typography, the bold colors, the list goes on. About a year ago I had decided I wanted to do a theme with the goal of matching the Zune Software. It started out as exactly that, but also being a fan of MetroTwit's interpretation of Metro resulted in me asking for permission from Long Zheng to refocus my theme based on their design.

What were the toughest parts of creating the "Metro" skin for Steam?

I'd say the toughest part of creating the skin initially was familiarizing myself with the language Valve uses. It bears some similarities to CSS but becomes its own beast once you dig into it. The second dilemma involves some limitations with the way Valve handles skins. In order to make this clear I should probably explain how a skin works. Valve has four different types of files that handle different functions, .res, .menu, .layout, and .styles. .res files are a legacy format and have been replaced by .layout files, but both still exist alongside each other. Both consist of controls and information on how to style and position them. Anything you see and click on is a control. A link is a control, an image is a control, and a button is a control. The issue lies in not being able to customize the controls from the skins directory. Valve has the client read the controls from the root directory but the style and positioning information from my files. I can't add a search box to a window without one, for example. This has caused a few problems with the skin and ultimately makes my work just a little bit harder than it needs to be. The client also has an auto-update feature that reads changes in real-time from the files in the root directory, which would be a great feature to have for skins as well.

What appeals to you about the Metro UI in general?

Delivering a clean, functional interface in a package that appeals to the eyes is how I'd sum up Metro UI, and is exactly the reason I love it.

Have you been surprised at the reaction you have received from people to the Metro Steam skin?

When I first started work on the skin it was a personal project. I made a thread here with a screenshot having no plans of releasing it to the public unless the demand was there. As it turns out people loved it and I promptly release version one.

Have you heard anything from anyone at either Valve or Microsoft about the Steam Metro skin project?

I haven't heard from either Valve or Microsoft regarding the project.

You must have heard about Gabe Newell's feelings about Windows 8. Do you agree or disagree with him and why?

I have. Gabe Newell had initially labeled Windows 8 as a catastrophe, and at that point I don't recall him citing anything specific about the operating system to warrant such a claim. As a follow up, he had done a video interview in August and can be quoted as saying, “things that used to be incredibly simple are very complicated and hard.” I wouldn't go as far as saying things are incredibly complicated now, but Microsoft seems to have taken a step back in usability on the desktop. Shutting your computer down takes a couple of extra clicks/motions, admin accounts seem to have reduced privileges when compared to Windows 7, and sharing has it's own new set of difficulties. I consider myself far from a novice but some of these changes even have me dumbfounded. We should be making the operating system easier to use across the board, but Microsoft seems to be taking the opposite approach for reasons unknown.

What other projects do you have in the works?

With the exception of the website that showcases the skin this has been my only project. Back in the Firefox days Josh and I would attempt to maintain multiple themes simultaneously and it honestly never quite worked. No one theme would get the attention it required and/or deserved and I've decided I don't want to go down that path again.

Finally, is there anything else you wish to say about your Steam Metro skin project?

It's been a pleasure working on the skin and the response has been magnificent. I'd like to thank everyone who took the time to submit bug reports and share their words of praise. Users who would like to keep up-to-date should join the Steam Community Group here. I've also created a showcase website that talks a bit about the theme, links to the helper program, as well as the skin itself. There's also a donation link for anyone who really enjoys the theme and would like to buy my next iced coffee!

We would like to thank "BoneyardBrew" for answering our questions!