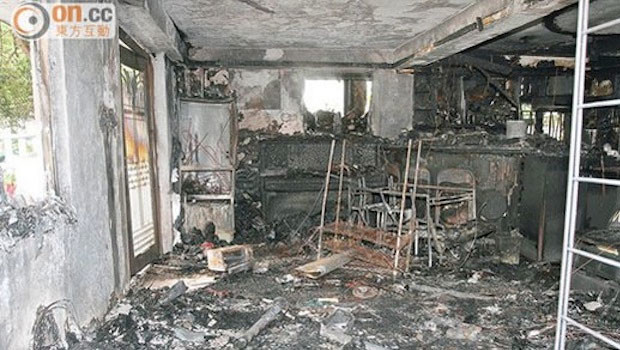 The aftermath of the fire allegedly started by the S4.

It seems Samsung is copying Apple again. After reports of people getting electrocuted while charging their iPhones came out, there’s now a new report that an exploding Samsung Galaxy S4 burned down a man’s apartment.

The victim here, Mr. Du saw his Hong Kong apartment go up in smoke after a self-combusting Galaxy S4 set fire to the sofa and eventually everything else. Mr. Du said he was using the phone which got progressively hotter until it finally ignited, at which point the shocked man threw the smartphone under the sofa.

Both he and his wife escaped unscathed from the whole incident, but Mr. Du insists Samsung are the ones liable because all the smartphone’s components were original and had not been tampered with.

However, investigators are already poking holes in this story, saying that original materials would never have burst into flames, and that Samsung’s rigorous adherence to standards prevents exactly such accidents. Investigators are now comparing chemical traces left at the site to determine whether the battery of the device was original or not.

Samsung is most likely not at fault here, with fake parts and batteries being common place. Let’s not forget that the iPhone incidents also happened to involve fake chargers. So all in all this was a lucky escape for Mr. Du and his family, and a good reminder on why we need original components for our devices.