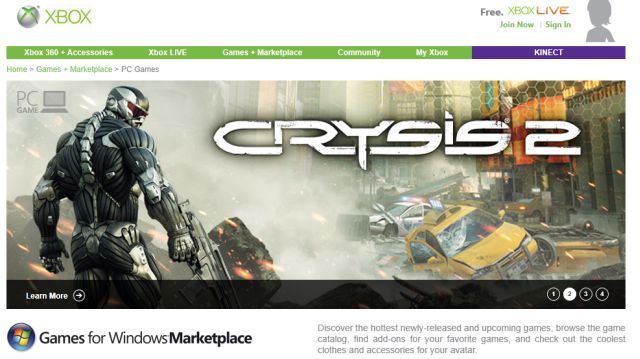 As promised last month, Microsoft has now relaunched its Games For Windows Marketplace PC game download service on its Xbox.com web site. The GamesForWindows.com web site is still live as of the writing of this news post but we suspect that the site will soon redirect to the Xbox.com site soon. Since the move was first announced last June Microsoft has sent a statement to PC Gamer stating, "The decision was made to create a single destination for LIVE gaming experiences across Windows and Xbox 360."

The statement added, "Members of our passionate communities across Xbox 360 and Games for Windows can now purchase and get details on their favorite games, all in one place. All user account information will remain the same and community members can still take advantage of their Xbox LIVE profile in their Windows games and stay connected to friends who are playing on the PC.” Oddly enough Microsoft declined to be interviewed by PC Gamer to discuss the matter further. If were you to visit the Xbox.com main page there is no immediate indication that the Games For Windows download site is now a part of Xbox.com. A link to "PC Games" is visible if you move your mouse cursor over the "Games+Marketplace" section at the top of the web page.

The move to Xbox.com represents just the latest change in Microsoft's PC game division since the Games For Windows branding was launched in 2007, about the time Microsoft launched its Windows Vista operating system.