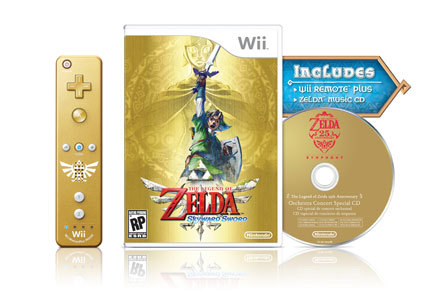 The Legend of Zelda: Skyward Sword is the upcoming and latest game in Nintendo's long running action series. It's due out for the Wii console on November 20. Today, Nintendo officially announced that there will be a special edition of the game released that will include something pretty cool; a golden painted version of the Wiimote Plus motion controller with a Zelda symbol. In addition all copies of the game in its first shipment will include a CD with songs from the The Legend of Zelda 25th Anniversary Symphony Concert that will be held in October. The game itself is due out in stores on November 20 for $49.99 for the regular version and $69.99 for the special edition with the golden Wiimote.

The game itself is actually a prequel to the events in The Legend of Zelda: Ocarina of Time. Because of this we get to see Link as a younger man and Zelda as his childhood friend rather than a princess. In addition to the Wiimote, the game will also used the WiiMotion Plus expansion for the controller for the game's sword fighting sequences.

Nintendo also announced today that it will release a new game in the Tetris puzzle arcade series for the Nintendo 3DS portable console. The game, Tetris: Axis, is due for release on October 2 and will have over 20 different gameplay modes. Also the fourth game in the Professor Layton series, Professor Layton and the Last Specter, will be released for Nintendo's DS consoles on October 17.