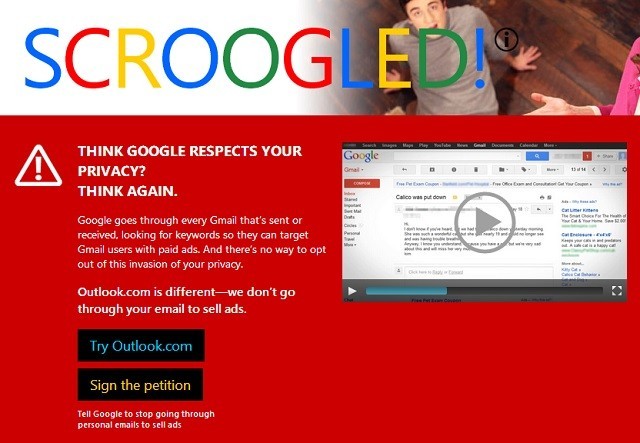 For the past few months, Microsoft has been waging an online and television-based ad campaign against Google under the umbrella title "Scroogled". In November, it was used to enforce Microsoft's claim that Google Shopping search results was full of paid ads instead of objective choices. In Febrary, the term was used again to go after the use of keywords in a person's Gmail messages to generate ads.

Google has mostly been silent about the Microsoft Scroogled ads but this week, Network World reports that Google's chief privacy officer Keith Enrigh called the campaign ""misleading" and "intellectually dishonest" at a panel discussion at the RSA Conference. The panel was also attended by Microsoft privacy officer Brendon Lynch, who countered by saying that the Scroogled ad blitz was simply designed to help the general public "make an informed choice."

Meanwhile, it appears that the Scroogled campaign has officially run its course: KQED.com reports that Microsoft has stopped buying the add for TV, online and newspapers. Stefan Weitz, Microsoft's senior director of online services, said of the campaign, "that part is about finished." It's debatable as to how effective the campaign has been in terms of people switching from Google to Microsoft services, but you can bet it won't be the last time Microsoft goes after Google and its privacy standards.