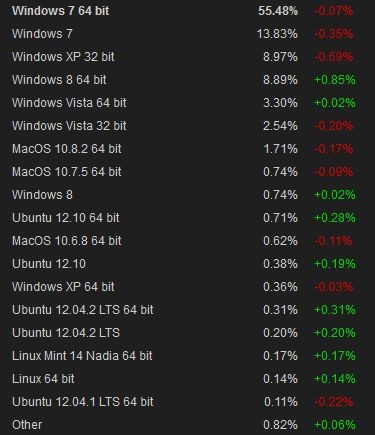 While Net Applications gives an idea about how Windows 8 is doing from a more general PC audience, the tens of millions of Steam users show how the operating system is being accepted by the more hardcore PC gaming crowd. Today, the latest Steam hardware survey results are in for the month of February 2013 and it shows that Windows 8 is now ahead of Windows XP among its user base.

The new survey results show that a total of 9.63 percent of Steam users (combining 32-bit and 64-bit SKUs) have Windows 8 installed on their gaming rig, compared to 8.76 percent in January 2013. Windows XP is still being used by 9.33 percent of Steam subscribers, down from the 10.05 percent that it had in January.

Windows 7 is still the top dog among PC operating systems on Steam. The February survey numbers show that it commands 69.31 percent of Steam users, but that's still lower compared to the 69.73 percent in had in January. Windows Vista users of Steam in February totaled a mere 5.84 percent, down from 6.02 percent in January, as the seldom-seen OS' share continues to slowly dwindle.

The combined number of Mac Steam owners is currently at 3.07 percent, down from 3.56 percent in January. There are quite a few versions of Linux showing up in February's Steam survey, but adding them all up shows that they total just 2.02 percent of Steam users.