Next year, over 314 million inkjet cartridges will be sold in Europe, the Middle East and Africa, according to data provided by the IDC. The IDC also indicates that a third of global printing occurs in this region. Putting those two figures together we get 942 million cartridges that will be sold across the world in 2012; that’s almost thirty cartridges per second.

These numbers are so large, it’s difficult to conceptualise the full extent of their scale, so the following infographic visualises this figure in a number of different ways. 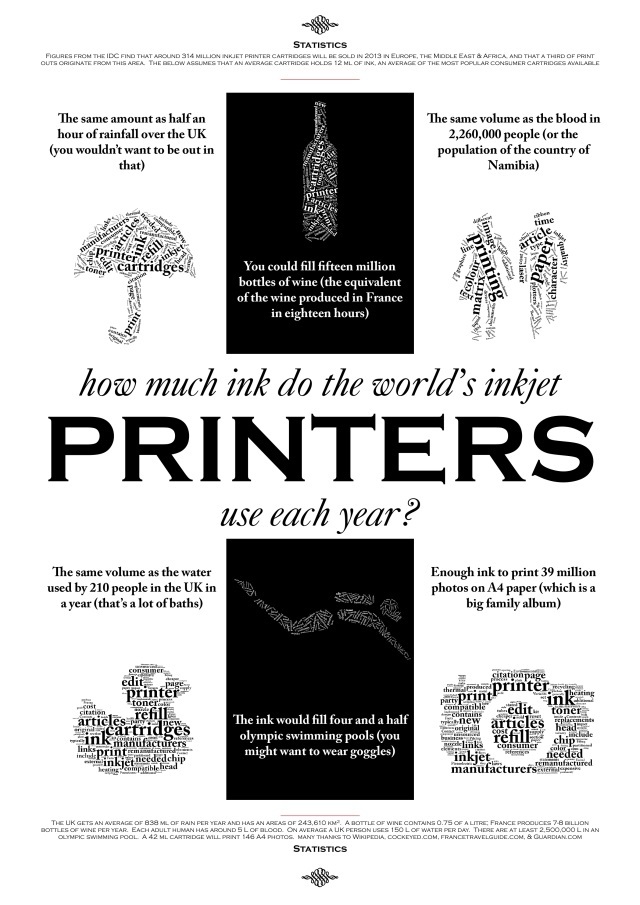 Part of the reason for these large figures is the market share of inkjet printing devices. Across the world, almost two thirds – 64 percent – of all printing devices are inkjet, but their global share is decreasing by 1.4 percent each year as consumers move toward laser printing options.

Increasingly, people are targeting independent sources for their inkjet cartridges rather than buying the branded product linked with their printers. When comparing 2011’s figures to those of 2010, Original Equipment Manufacturer (OEM) inkjet consumables sales decreased by 19.2 percent. This change can be attributed to the recession, as consumers are looking to cut corners and are seeking out cheaper options for their printer cartridges.

Also, the use of these non-OEM cartridges is not consistent across all of Europe, the Middle East, and Africa (the EMEA region). "The demand is higher in Central and Eastern Europe, the Middle East, and Africa than in Western Europe. This is because of different price sensitivities and the structure of local offers, with, for example, Russia and Ukraine being heavily dominated by bulk products and refill kits," EMEA Consumables Program Manager Joanna Pupkowska said.