When HP first sent me the EliteDisplay S14, I really wasn't sure how I was going to be able to write a review. I mean, it's a 14-inch portable screen; how much could I write? But then I fell in love with it, and I realized that I have to write about my experiences with it.

A dual monitor setup... in Starbucks

That's right, I did it. I set up the HP EliteBook 840 G5 on a table and put the EliteDisplay right next to it. I took the USB Type-C cable that was provided and plugged it in, and boom, it was ready to go. Actually, I got a couple messages saying that the machine couldn't supply enough power, but those went away after I installed a driver. 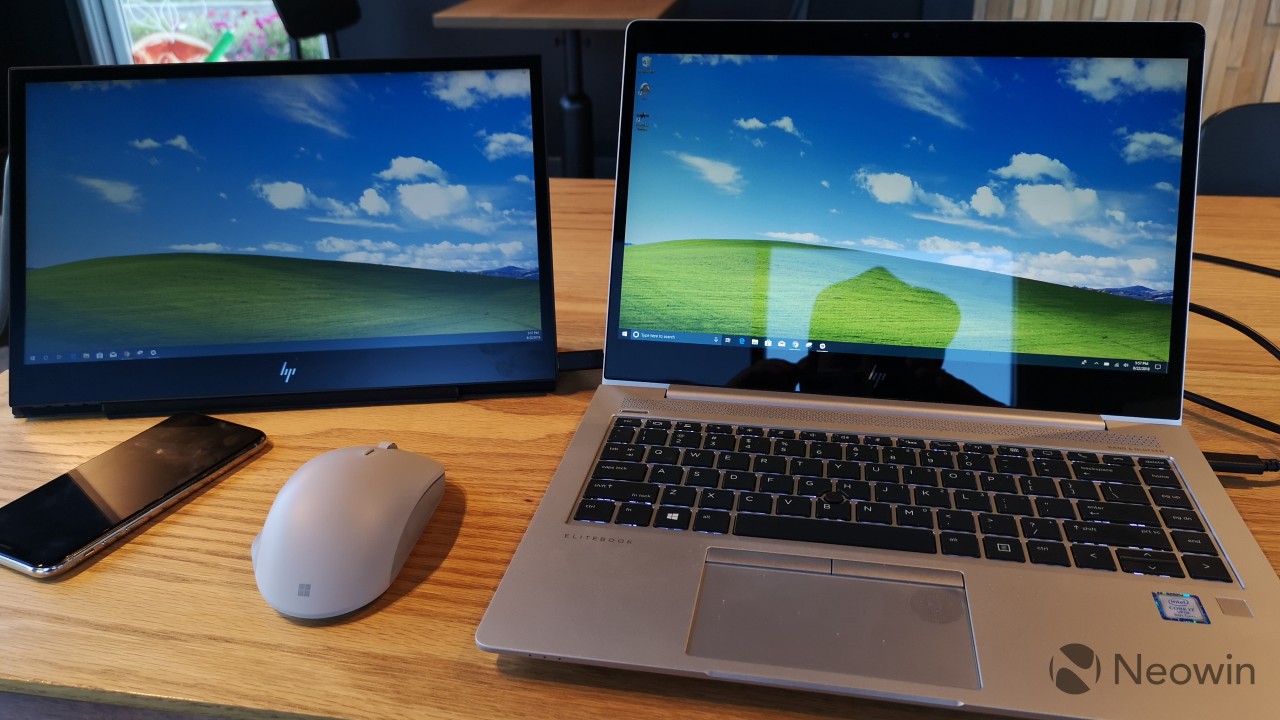 If you don't use two monitors at home, I'm not even sure how you computer. For me, when I'm on the road, I often miss it, especially since the screen on my laptop is even smaller. The ability to get that dual monitor setup from anywhere that I am is awesome.

I used it to extend my display, with OneNote open on one side and working on the other. It's the same setup that I use at home, and now I don't need to have a cramped down split-view on a 14-inch laptop.

As anyone who is familiar with Windows knows, extending your display isn't the only option. You can also duplicate your display, which is actually the default, and it came in handy.

This method was great for showing people what I'm working on. For example, in a meeting, I can open Illustrator on my PC and pull up a design, show it to others, and they can see changes that I'm making when I make them. It's so much easier than pulling up a file on your laptop, turning it around to show them, and going back and forth as you make changes. 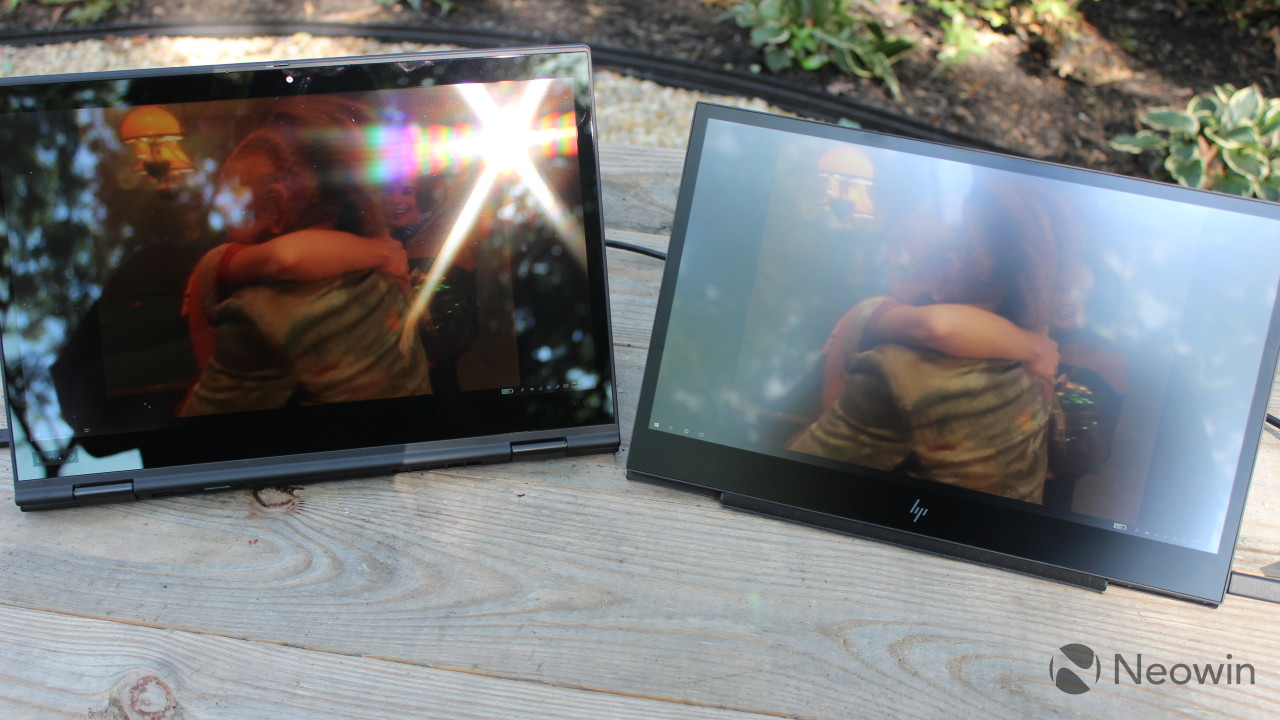 But that's not all, because this works for play as well. If you're ever with someone and you want to watch a movie on your laptop, good news. Each of you can have your own screen, although you might want to make sure that your laptop has pretty loud audio so that you can both hear. Or better yet, buy a 3.5mm headphone splitter and you can both have your own everything.

Before I talk about the design or the actual quality of the display, I wanted to talk about a few use cases for it, because that's really what this is about. It's about adding another dimension to your PC experience while you're on the road. It's about freeing you from some of the more cumbersome aspects of using a laptop.

The HP EliteDisplay S14 is just 8.9mm thin and weighs in at 2.2 pounds, so it's easy to carry in your bag on top of your laptop. There's also a folio cover, which is how you'll stand up the screen. Unfortunately, that also means that you only get one display angle. 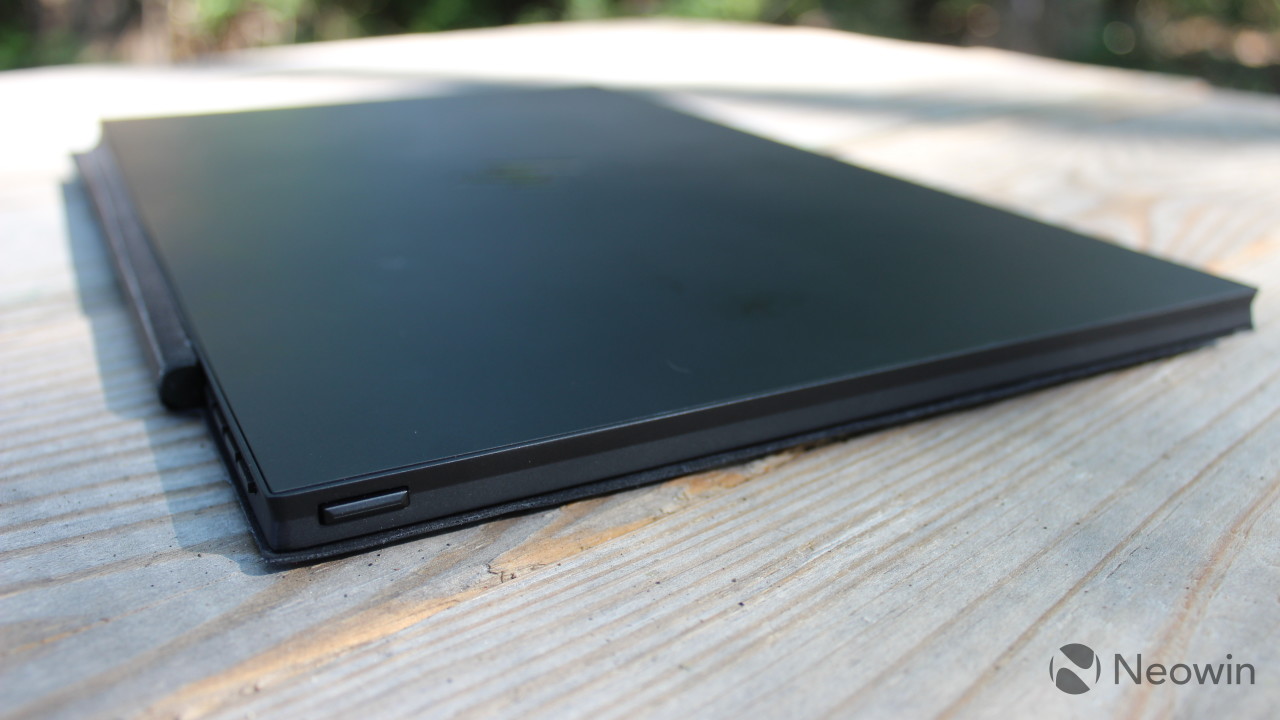 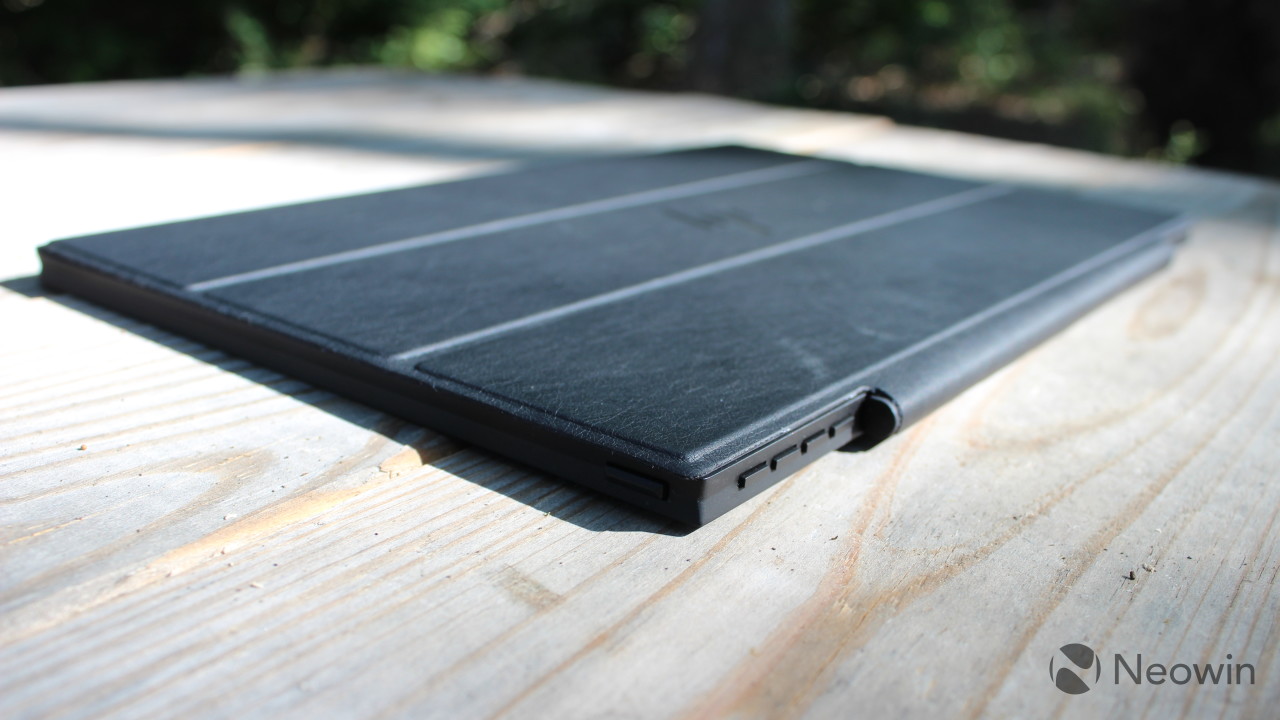 On the bottom, there are four buttons for controlling things like brightness and other display settings that you'd expect. Oddly, you can't actually control these from the Settings app in Windows 10.

It's not a complicated design at all, because this is a pretty simple device. It's just a screen that you plug into your laptop and start working. Its minimal design helps with the easy setup. 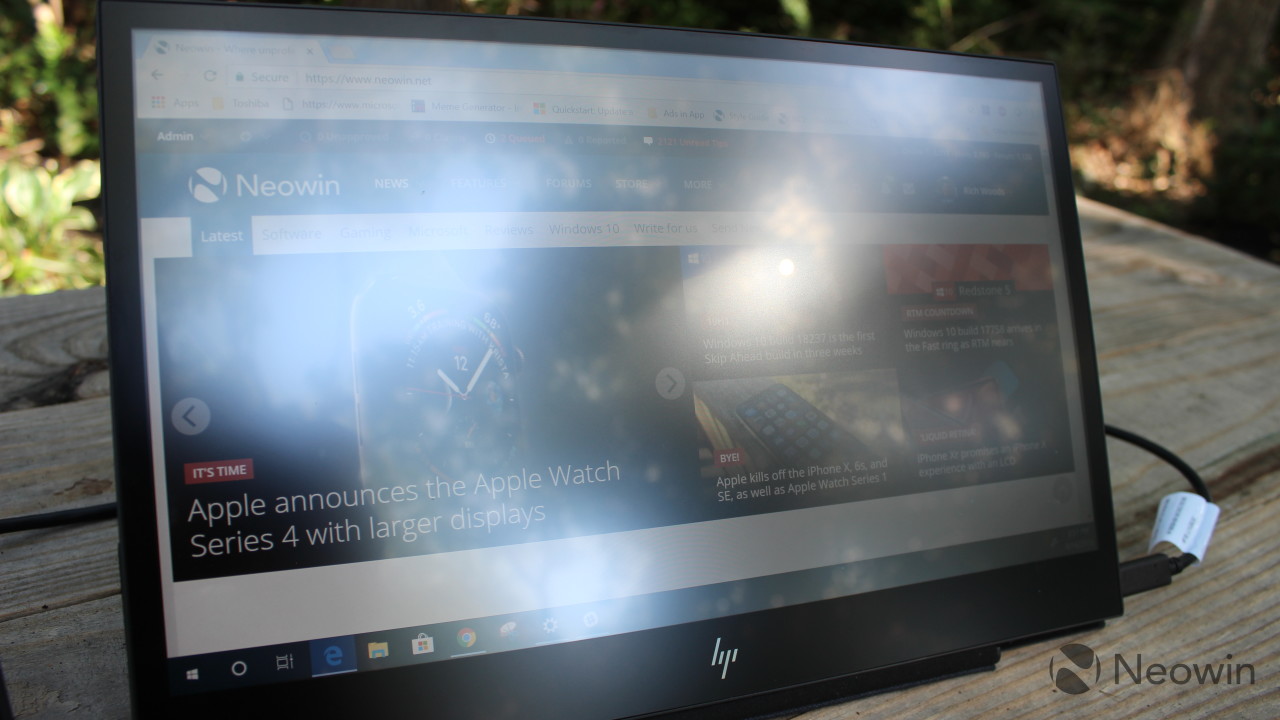 The display has narrow bezels on the sides and top, with a bit larger of a chin. Usually, the bottom bezel on a laptop (or portable screen, in this case) is made to be a bit larger to lift up the display a bit.

The screen itself is anti-glare, which is great for working on. It has a 700:1 static contrast ratio and a 5,000,000:1 dynamic contrast ratio. At the end of the day, it's a display that you won't be drooling over, but it gets the job done. I really think the pros outweigh the cons here.

While I think this is a great product for $219, it's certainly not perfect. It's missing a few things that I'd love to have. These things might compromise the product in another way, boosting the price, making it a bit heavier, and so on, but maybe it would make for a good separate product. Either way, here's what the EliteDisplay S14 is missing.

Sorry HP, but you can't get out of this one so easily. If you're going to call this thing Elite and leave out the EliteBook's best display feature, I have to say something. Sure View is a display technology that will block people from looking over your shoulder and seeing what you're working on. 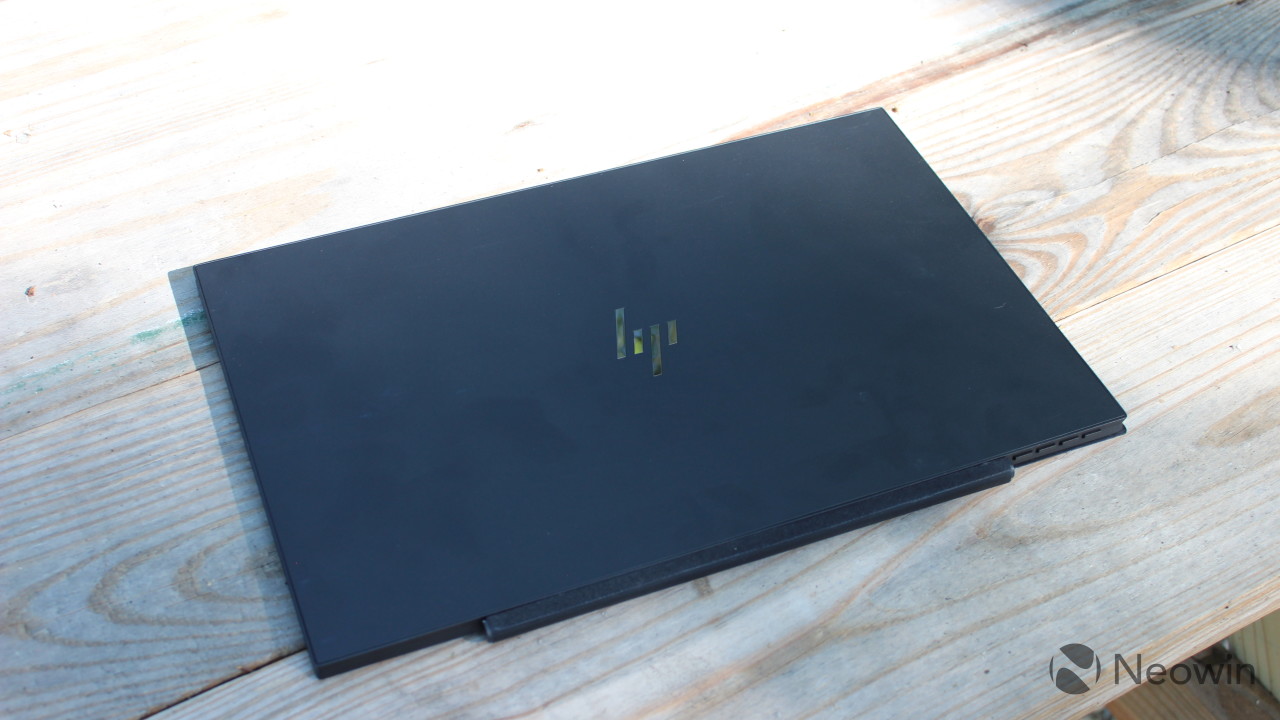 Unfortunately, if you're using an EliteBook with the EliteDisplay and hit F2 to turn on Sure View, it only does so on the laptop.

And to be clear, Elite is HP's commercial brand. Obviously, not all Elite-branded devices have a Sure View screen.

I'd love to see support for Miracast or some other wireless display standards. And yes, they're usually terrible, but it would just be nice to have. I'll give you an example. I tried to use it with a Lenovo Miix 630 and it wouldn't work. I was bummed out, and it would have been nice to be able to display wirelessly in a pinch.

I think that at this point, we're just so used to touching our screens that it feels awkward when I can't touch this one. And if you've got a laptop with USB Type-C, chances are that it supports touch. It just feels strange when you can touch one of your screens and not the other.

Oh, and while we're at it, let's throw pen support in there. And by the way, I mentioned the idea of sharing your screen at a meeting, but touch and pen support would mean that they can actually collaborate with you. 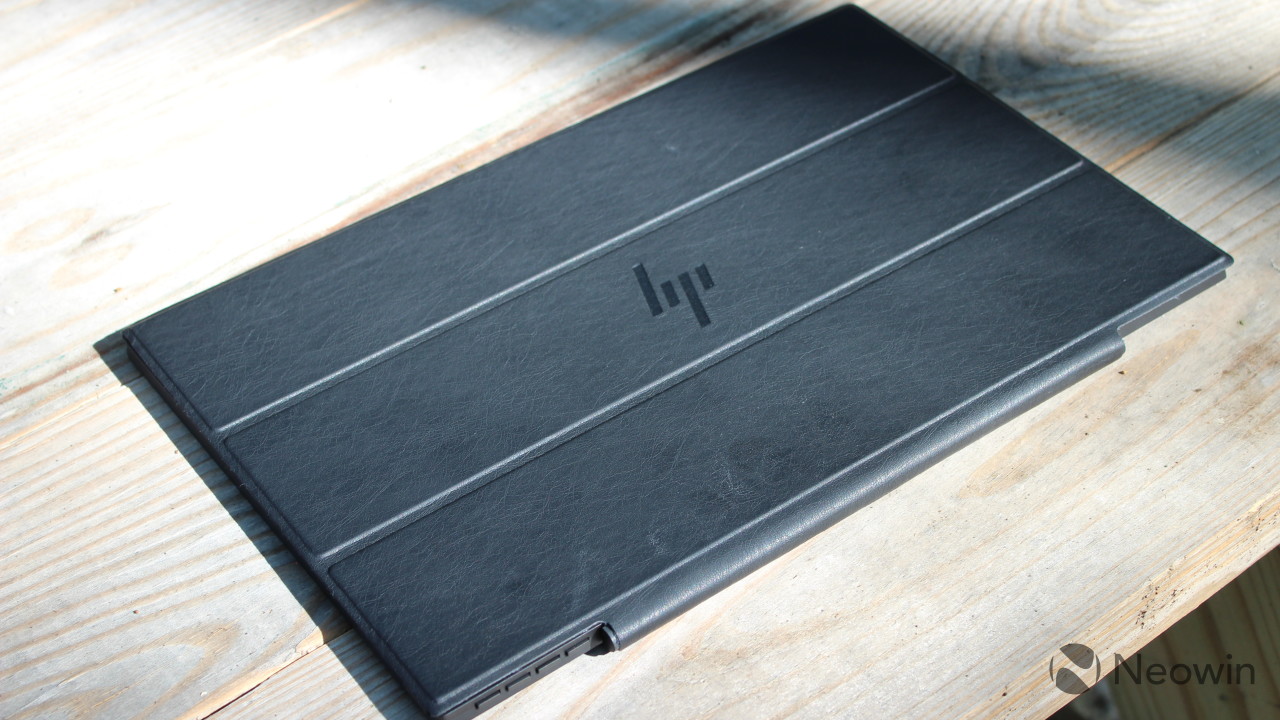 Some of the things I've mentioned are relatively unimportant, like Sure View and wireless, and some of them are legitimate gripes with the product. This is a legitimate gripe. The big issue that I have with the folio cover is that it only allows for a single display angle. It really could have used something adjustable.

For one thing, the EliteDisplay S14 just sucks down power. Remember, there's only one USB Type-C port, meaning that your laptop is powering the display. Luckily, many laptops these days have multiple power ports, so you can power your laptop while you're using the EliteDisplay. I did have an issue with the EliteBook, as it only has one Type-C port and a pin charger, and I'm only in the habit of bringing USB Type-C chargers with me. The laptop only lasted a little over an hour with the display attached to it.

This is also something that would be needed if I got my wireless wish. Sure, it could be connected to power, but maybe you want it to be completely wireless.

Again, I realize that all of these things are omitted from the product to keep it at certain dimensions and at a certain price point, but I need to point them out.

I know I just spent a big part of this article talking about what's wrong with the HP EliteDisplay S14, but you should still totally buy it. If your laptop has a USB Type-C port with DisplayPort-out, you could benefit from this. 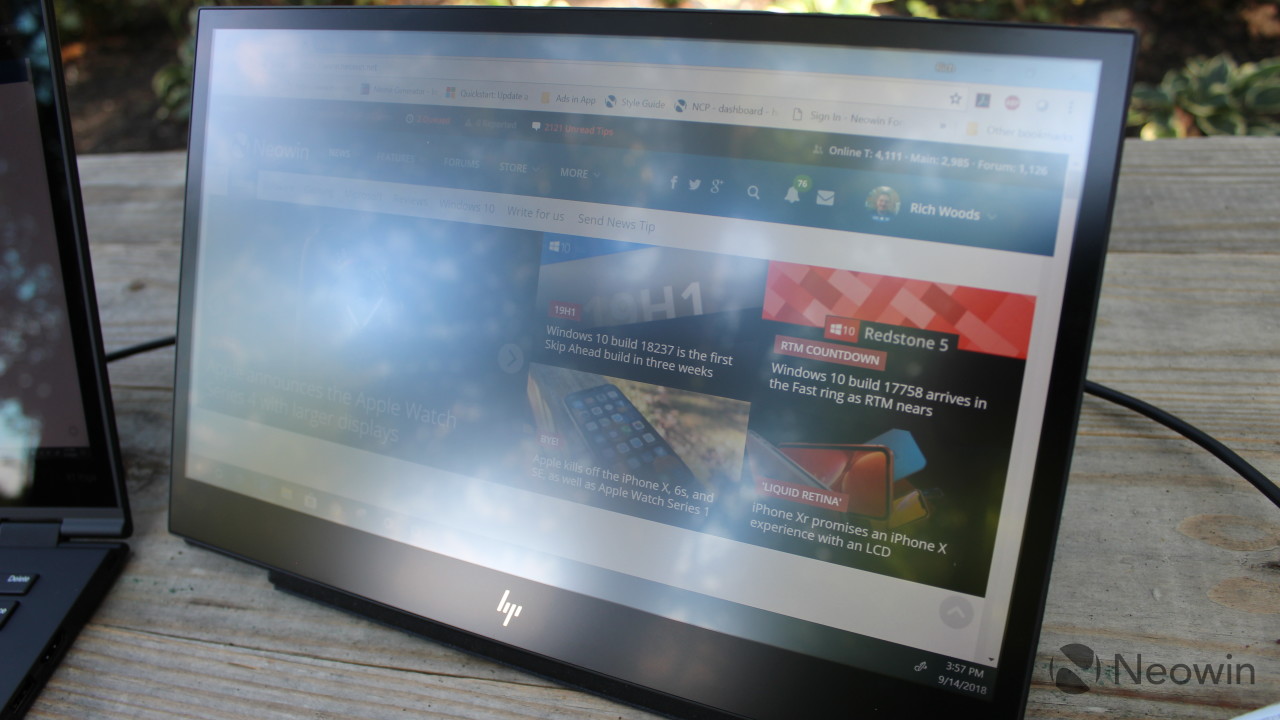 I described above a few use cases for this, and it mostly assumes that you take your laptop on the road with you, but there are so for whom their laptop is their only PC. If you're using your laptop at home, this would help you.

Again, a second monitor adds an entirely new dimension to your computing experience. You can extend your screen for the additional real estate, or you can duplicate your screen to share it with a friend or work with co-workers.

Seriously, just buy this thing because it's awesome, and it's only $219. Just make sure you bring your laptop charger with you.