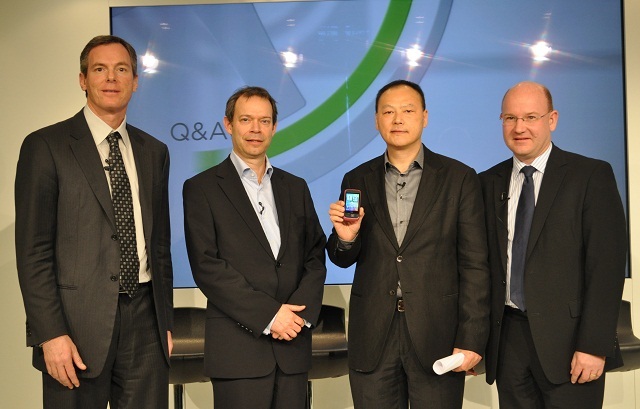 On Wednesday at Mobile World Congress 2010, HTC and O2 announced it will offer the HTC Smart in select European markets.

The HTC Smart is based on the Brew Mobile Platform. Created by Qualcomm, the company recently updated the platform to tap into the mass market. The Brew application store includes 18,000 applications and has paid out over $3 billion to developers based off applications written on brew.

The Smart includes HTC's Sense UI which offers a finger friendly user experience for access to quick functions on the device. HTC has included several widgets for quick access to contacts, photos, music, weather and more. Smart also includes the "Friend Stream" that aggregates all your social networks, including Facebook, Twitter and Flickr. The stream offers an organised feed of updates.

Steve Alder from O2 would not confirm tariffs and pricing but stated "we will be bringing this to market at less than half the price of a smartphone today." He also added "we are delighted we can bring this great new product to our customers." HTC and O2 are both targeting non-smartphone users with this device and claim that the phone will launch at an affordable price.

The Smart was originally unveiled at CES 2010 this year and is designed for the younger market of individuals who are typically Pay As You Go customers and do not have a credit card available. O2 is aiming to attract younger people with the device and those who love social networking sites like Facebook and Twitter, "very much the heart of our O2 customer base" stated Steve Alder from O2.

According to AdMob the top 15 HTC devices in December 2009 included 7 Android phones and 8 Windows Mobile. HTC is aiming to bridge a gap in the market for those who have feature phones and want to move to a smartphone without the associated device and tariff costs.

The HTC Smart will launch in the UK, Germany and Ireland exclusively on O2 in April.