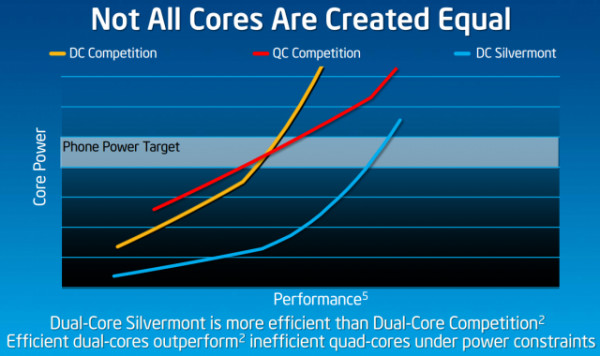 Intel has always made very powerful processors but they never were very energy-efficient. As such, the giant CPU manufacturer has always had trouble when it comes to mobile CPUs, but according to a leaked slide this is about to change.

A leaked benchmark performance test screenshot seems to show that Intel’s newest Atom chip, Silvermont, is more efficient than any of its predecessors and it can easily outperform the latest Qualcomm 800 CPU based on the ARM architecture.

In AnTuTu, an Android benchmarking tool, the new CPU scored above 43,000 while Qualcomm’s quad-core 800 CPU only reaches between 25,000-30,000 points. Intel claims that their efficient dual-core can outperform a quad-core under smartphone power constraints.

Silvermont is a dual-core x86 CPU based on the 22nm manufacturing process which supposedly gives it 3x greater performance compared to previous Atom processors, while simultaneously considerably lowering power consumption.

The latest iterations of Intel’s chips have all been about efficiency and power management and if this benchmark advantage is translated into real world improvements then we might just see Intel starting to own the mobile computing field. Silvermont equipped devices should be hitting markets by the end of this year and you can be sure we'll put some through their paces and report the findings here.