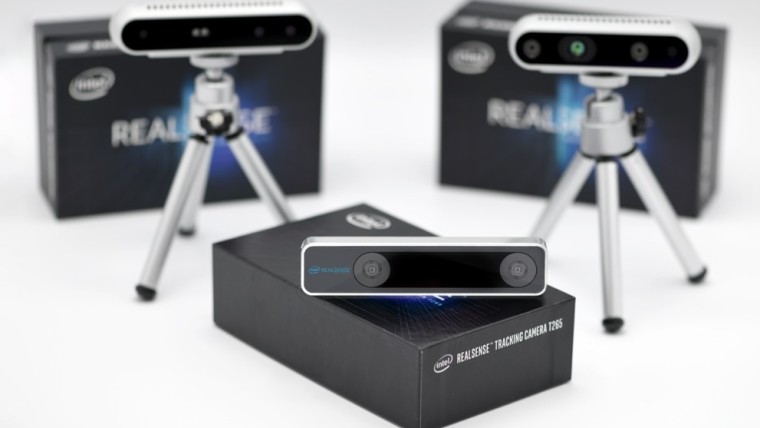 Intel today announced their new RealSense Tracking Camera T265, which they describe as "a new class of stand-alone inside-out tracking device" designed for use in autonomous driving, drone and augmented reality applications.

The camera includes onboard guidance and navigation capabilities powered by Intel's new Movidius Myriad 2 visual processing unit, or VPU, which help robots and drones figure out where they're going in 3D-space and react to shifting environments using visual clues. This is helpful in places where there's no GPS service or when the work area is constantly changing, like a busy warehouse or rows of crops where humans and animals might unpredictably get in the way.

Intel's new VPU combines data from the twin 170-degree field of view cameras to achieve simultaneous localization and mapping (V-SLAM) without requiring external sensors. The company claims the T265 delivers 6-degree-of-freedom tracking and can update a map of the surrounding area in real time.

According to Sagi Ben Moshe, vice president and general manager of Intel's RealSense Group, the T265 "was designed to complement our existing Intel RealSense Depth Cameras and provide a quick path to product development with our next-generation V-SLAM technology."

Intel designed the camera to be used as a "building block" for autonomous devices that won't require a connection to the cloud or bulky sensors to update maps in real-time "since all position calculations are performed directly on the device," a company press release stated, "tracking with the T265 is platform independent and allows the T265 to run on very low-compute devices."

The camera is available for preorder and will begin shipping at the end of Februrary with an MSRP of $199.

The T265 complements Intel's D400 cameras, which shipped last year, and the data from both devices can be combined for more sophisticated applications, like occupancy mapping for a building or parking garage, 3D scanning, advanced navigation and collision avoidance in GPS-restricted environments.