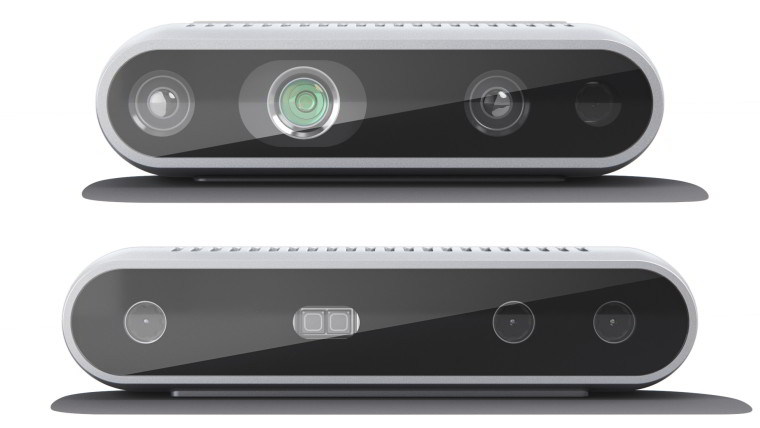 Intel unveiled two new 400-series 3D RealSense cameras at CES last week, and has announced that it has started shipping the new D415 and D435 today.

Both cameras offer depth, RGB and infrared sensors, and 28nm-process vision processors. Here are the basic specs applicable to each:

The depth cameras offer 1280x720 resolution at 90 frames per second while the RGB sensors provide the same resolution, but at 30fps. Both are capable of being connected to a computer with USB 3.0 connections, and while the camera side is USB-C, the PC side is USB-A. The units are an upgrade from the SR300 camera, and while both are still Windows-based, they now work with Linux as well, according to a 3DScanExpert report on the units from CES.

The D415 and D435 are almost identical, with the major difference being the field of view. The D415 comes in at 69.4 x 42.5 x 77 degrees, and a minimum scanning distance of 30cm. The more powerful D435 provides a wider FoV of 91.2 x 65.5 x 100.6 degrees, with 20cm minimal scan distance, meant for tracking faster motions or objects. However, the Rolling Shutter tech can cause some minor distortion if the movement (or panning) is extra fast.

“Many of today’s machines and devices use 2D image recognition-based computer vision, but with Intel RealSense’s best-in-class depth technology, we are redefining future technologies to ‘see’ like a human, so devices and machines can truly enrich people’s lives,” said RealSense VP and GM Sagi Ben Moshe said in the obligatory press release. “With its compact, ready-to-use form, the Intel RealSense D400 Depth Camera series not only makes it easy for developers to build 3D depth sensing into any design, but they are also ready to be embedded into high-volume products.”