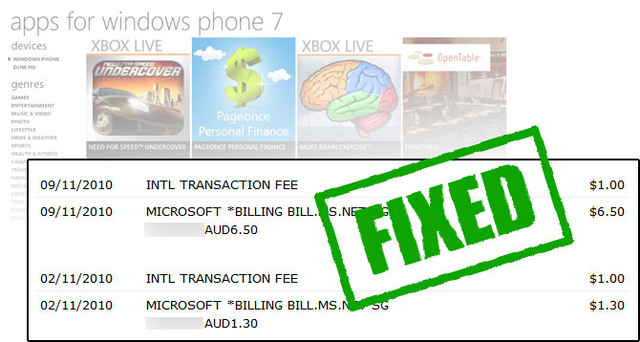 Australian Windows Phone 7 residents will be happy to hear that istartedsomething is reporting that the issue with the Windows Phone Marketplace billing system has been now been fixed. The issue was first noticed when an international surcharge fee was being added to the invoice for each application bought when paying via credit card, back in early November last year.

The root of the cause was due to the fact that the processing of the application purchase was carried out in Microsoft's Asia Pacific headquarters in Singapore, making any purchase on the Australian Windows Phone Marketplace classed as an international payment according to the banks. Being sly and cunning, the banks would happily slap the international surcharge fee on top of what the application originally cost, making the $0.99 application actually $1.99.

Microsoft has now been so kind and should be applauded given the circumstances of the issue to setup a local transaction facility in Sydney, Australia, so that users will now no longer be hit with the international surcharge fee from the banks.