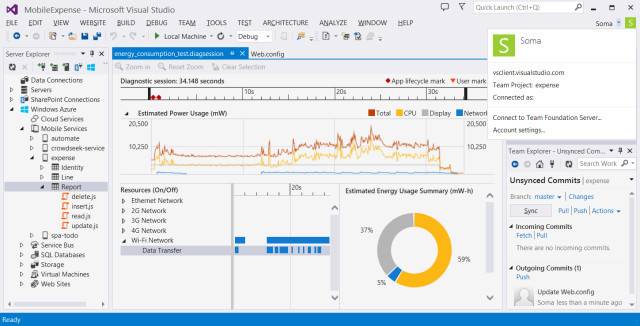 Last week, the same day that Windows 8.1 was released, Microsoft also launched the RTM version of Visual Studio 2013. The latest build of Microsoft's popular software development tools was made to help create professional Windows 8.1 apps, among other things. The transition from making desktop applications to apps made for the Modern UI is certainly something that the creators of Visual Studio 2013, and its 2012 predecessor, tried to make as smooth as possible.

While the Visual Studio team was extremely busy last week with the launch of the 2013 edition, Neowin was given a chance to ask a few questions to David Carmona Salas, the Director of Product Marketing for the Visual Studio division, specifically on using the software to make Windows 8.1 apps.

First, the launch of Windows 8 in 2012 also meant that app developers had to learn new ways to make their creations with the Modern UI. Did the Visual Studio team take feedback from those first Windows 8 developers and put some new features in Visual Studio 2013 based on their comments?

At Microsoft, we’re always listening to the community’s input and building tools according to what is most requested by, and what holds the greatest promise for increasing the efficiencies of, our customers. So, to your question specifically, many of the features in Visual Studio 2013 can be tracked back, ultimately, to a comment from the community, which we receive through Visual Studio User Voice, MSDN forums, comments in articles like yours and community discussions in places like Hacker News and Reddit.

What specific features did the team put into the new version of the tools so that app developers can get ready to make new creations specially with Windows 8.1 in mind?

The very best place to see all the new features of Visual Studio 2013 is on the What’s New in Visual Studio 2013 page. The IDE provides several updates and new features designed to get the most out of the new capabilities and features in Windows 8.1, including a new performance and diagnostics hub to optimize application performance and battery consumption, new app design and animation capabilities, as well as more productive code navigation and editing. These features work together to help devs efficiently build more compelling modern applications that shine on the latest devices. It also bears mention that Visual Studio 2013 supports importing Windows 8 projects and easily integrating the new capabilities and features of Windows 8.1 into those projects.

Recently, a free web-based way to make Windows Phone 8 apps was launched by Microsoft. Did the Visual Studio team have any input in that project and is such a web-based solution planned for Windows 8 apps as well?

Microsoft Visual Studio 2013 is the best way to develop for Microsoft platforms. Windows Phone App Studio is designed to provide an entry point into development for Windows Phone enthusiasts who want to create their first applications, which can then be published directly to the Windows Phone Store or further developed from within Visual Studio, which provides a developer experience to target more differentiated apps.

Finally, Visual Studio 2013 has released RTM builds for MSDN and TechNet subscribers. What still needs to be done before then and the official launch in November?

The Visual Studio Launch event on November 13 is a moment in time during which we’ll comprehensively discuss what’s new in the product, showcase some customer use cases and provide Microsoft’s vision of development, and development teams, in the future. Though Visual Studio 2013 is “finished” at this point, our new commitment to much shorter intervals between releases of updates and new features means the software is both always “done” and never “done” simultaneously. Changes will continue being made based on what the community asks for and development trends we at Microsoft recognize. The best way for a developer to receive these new elements as quickly as possible is to purchase Visual Studio through an MSDN subscription.

We would like to thank David for answering our questions! We hope to have a longer interview with him in the near future closer to the Visual Studio 2013 launch event.