When I first played Runbow on PC﻿, the game seemed to be quite fun; however, the lack of a proper control scheme, which forced me to quit a majority of the time left me wanting the title on Xbox One. Then, shortly after my run in with this game, 13AM Games announced that it would launch the game on Microsoft's platform, and I rejoiced.

Runbow is a 2D-platformer, but with a very big twist in the tried and trusted formula that one would see in games like iDARB and Unnamed Fiasco. Unlike those games, the developer introduced a new mechanic that forces the user to play it cool, or in some cases think outside the box. Each level comes with a multitude of platforms of different colors. However, the catch here is that the background during gameplay changes to match a specific platform color at repeating intervals. If the background and the platform match, you cannot jump to it. This causes some interesting twists when you least expect it, making it quite exhilarating. 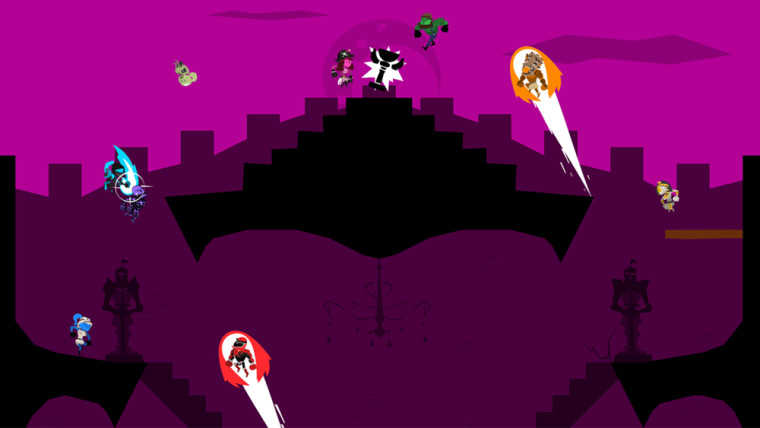 Gameplay is extremely fun, and with the Xbox One version, co-op has become a go to play mode for me in particular. There is nothing more satisfying than to beat your opponent by reaching a specific goal. If one of you cannot keep up, however, the one falling behind dies and will need to wait until the other finishes the level; or in most cases fails to time a specific jump perfectly, and falls to his death. The game also offers players a multitude of multiplayer maps and online modes, and more interestingly, an Adventure Mode which sees you beat levels of increasing difficulty to reach the evil Satura, an angry assassin that hates people having fun, for some reason.

I spoke to the Lead Level Designer, Justin Fernandes, about the developer's experience porting the game and the overall reception on Xbox One:

Hi Justin, Runbow has been with us for many years, first appearing on the Wii and then PC. How difficult has the process been moving between these disparate systems?

Every version of the game has come with its own unique challenges and hurdles. There’s always some

surprise bug that makes us go, “Oh...can you do that in the other versions?” And then we have to go back and check all panicked, but usually, it’s just a result of moving to a new system.

By and large, the biggest challenge was creating Runbow Pocket for the New Nintendo 3DS. We use 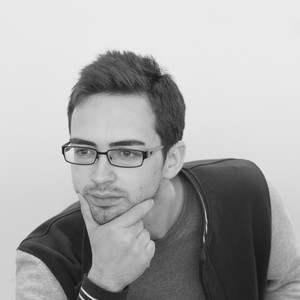 the Unity engine and it didn’t actually have support for the 3DS when we started working on it. So that took a lot of work and experimentation and hair pulling, and the project took a lot longer than we thought it would [to] get out there. I think I actually saw our coders age five years before my eyes when it shipped.

The Xbox version was much easier on us than that. When we started working on it, we’d just hired two new guys, Mike and Elsio. They worked on the project longer than anyone, so I asked for their thoughts on what was the most difficult to implement, and they both agreed (pretty quickly) that voice chat was a challenge. It was something we didn’t have before, so there was no ground work, and the plugins we were using kept breaking on them in weird ways that they weren’t expecting. Of course, it didn’t help that there was construction going on on the floor above us, so every day was just 8 hours of banging and hammering and drilling noises coming from the ceiling. That went on for a couple months. Phew.

Runbow is such a unique game experience, something that I myself have never seen before. How did you guys come up with this concept?

Our very first prototype for Runbow came from mashing up a bunch of ideas in a game jam. One of our guys wanted to make a competitive multiplayer game, another wanted something that involved colors. When we combined those ideas together with the super weird and obscure jam theme that we had (something like “the world is not what you see but what you are", I don’t know), Runbow was born! And even in that jam, we were getting really solid feedback and seeing people have a lot of fun when they were playing it, so we decided to pursue it.

When I played the PC version, I had a lot of trouble getting used to the key layout. When I played the Xbox One version, it just clicked. Do you think the game is a better fit on consoles than on the traditional PC?

I’m a console guy myself, so I definitely get where you’re coming from, and this is actually something that we tried to account for when designing the PC version of the game.

Local multiplayer was a huge part of the original Runbow, so the default key layout was designed the way that it was so that a couple people could try to cram themselves around one keyboard to play together if they wanted to. Of course, it was pretty obvious that not everyone would want that, so we allowed for full customization of the layout in the options menu. And just like on Wii U, you can also do that with a ton of game pads too, which is generally what I do when I play on PC.

Then again, some of the guys in the office have no problem playing on a keyboard, so I guess it comes down to personal preferences in the end. 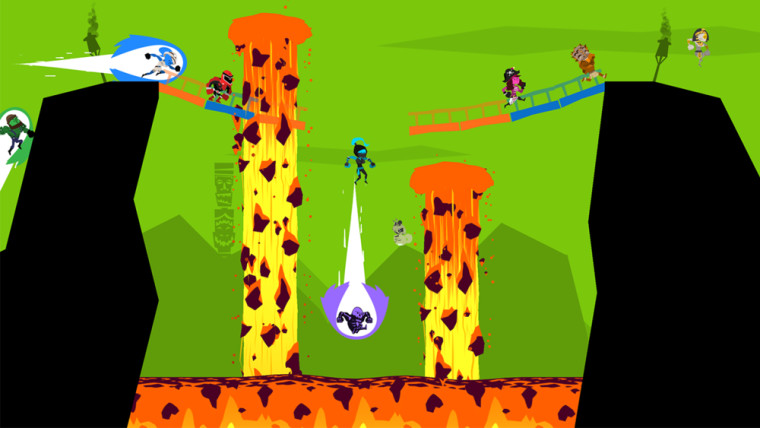 When launching the game on Xbox, why did you decide to offer the game on Games with Gold as a free download?

I think Games with Gold is [a] great fit for Runbow. We want Runbow to be played by as many people as possible and having it as a free download on GwG will undoubtedly help us achieve that. This is our first launch on a Microsoft console, so there are a lot of Xbox players that may not be familiar with us yet, but GwG will allow us to reach some of those players where we wouldn’t have before. And on top of giving new players a taste of our content, it also simultaneously builds a much larger community around the game, letting players who prefer to play online get a better experience on launch.

How has the reception been to the game on the console specifically, as you've seen thus far?

So far it’s been pretty positive. We’ve gotten positive reviews from critics and we’ve had a surprising amount of people emailing in asking us to check stats from matches and help settle scores they’ve had with their friends. One guy even wanted us to delete his friends save data.

One negative I’ve noticed amongst players is that some think the game is too hard, which we got with the other versions as well, but I’m not entirely opposed to this. There was an article on Kotaku recently entitled More Games Are Getting Easier After Release that discussed how a lot of games are adjusting their difficulty after launch. With Runbow, while I definitely think there are things we’ve learned from the feedback, we’re also happy with the final product. One of the best parts of Runbow is that it has a little something for everyone. Modes range pretty drastically in difficulty, and in Adventure, which is the single player focused mode that is more accessible, we allow players to carve their own difficulty curve by having each level unlock adjacent levels, giving them a choice. The map is also color coded, and you’re not likely to be surrounded by tough levels unless we think you can take it. It’s a cool little feature and something that we definitely want to maintain.

Runbow launched on Xbox One through Games with Gold this month and is still available to gamers who subscribe, for free. If you haven't played the game yet, I would highly recommend you try it out. It does come with some pretty difficult maps; but like Fernandes mentioned, it offers you the choice of how you would like to proceed in the Adventure mode, being offered different levels that are color coded to match its difficulty. 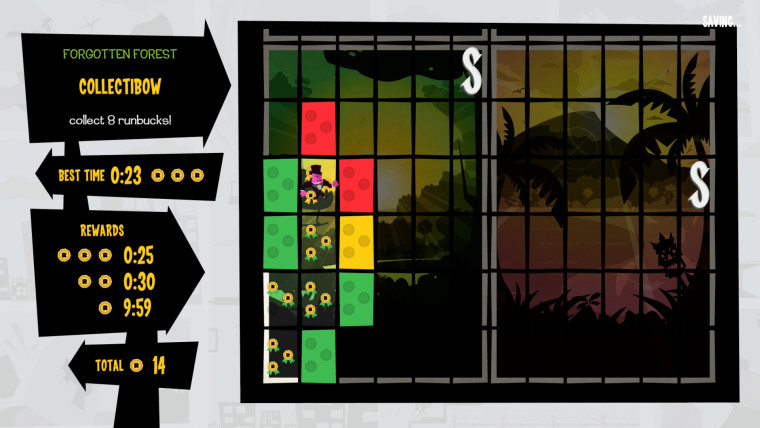 If you happen to have more than one controller, you and up to four friends can join in to challenge each other in the local co-op battles as previously mentioned, or try and test your jumping skills in one of the three online game modes. Personally, I found that even though they were quite fun, my latency - being in South Africa - didn't help me a single bit.

Runbow is scheduled to launch on PlayStation 4 later this year, as noted by a third party developer. The game is also available on 3DS, Wii, and PC.