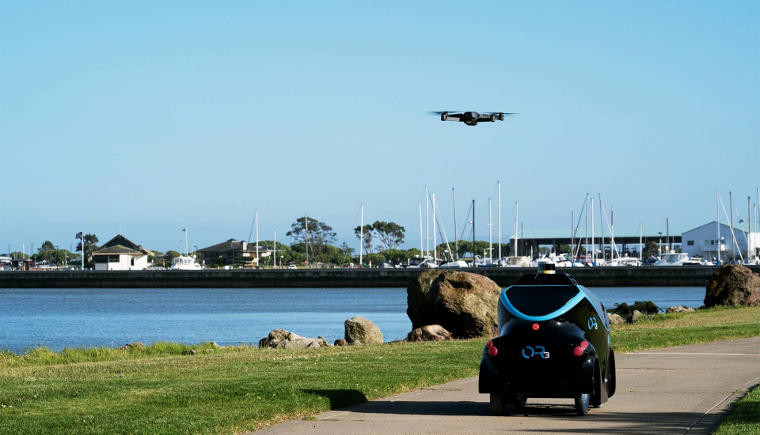 The Commander in Chief of the Dubai police force has announced a new autonomous Police Patrol system, that will be crawling the streets of Dubai by the end of this year. The system has been developed by OTSAW Robotics and is also known as the O-R3; it is an automated waist-high security car, that can deploy its own airborne drone.

This vehicle is an impressive fusion of new technologies, and the company says that it exploits a combination of machine learning algorithms and 3D SLAM (Simultaneous Localization and Mapping) technology in order to do its jobs, and navigate its surroundings.

The O-R3 is currently only intended as an observation, tracking, and crime deterrent system, it does not have any way of physically stopping criminals or intruders. In order to fulfill its roles, it utilizes Lidar, HD cameras, thermal cameras, laser scanners, GPS, facial recognition, Ultrasonic sensors, long range data transmitters and other sensors.

The O-R3 is able to familiarize itself with its surroundings, track number plates on cars, and detect unusual objects, like an abandoned suitcase. It can also identify and pursue a human intruder by using its motion, thermal, and facial recognition capabilities. If an intruder manages to outrun the ground vehicle, the O-R3 will then deploy its own airborne drone, which is held within the larger ground vehicle, to continue the chase.

The system sends all of its feeds and information, that also includes data on weather conditions, to a central Fleet Control Centre, where a human operator is able to observe and also take manual control of the system if they wish.

The company declares that the O-R3 can provide 24/7, 365 days of the year, autonomous patrolling, as it is able to self-charge. It is assumed that the vehicle must drive itself to a battery charge point in order to exchange its batteries and continue patrolling, without having to stop and recharge. Unlike the much smaller Tertill gardening robot, the O-R3 does not appear to be solar-powered at all.

As was seen with the development of ambulance drones fitted with defibrillators in Sweden, this is a very similar application of automated systems to one of the core services of a society, perhaps it will not be long before the city of Dubai deploys a drone system for its fire emergency services.