Just under a month ago, on September 13, Apple began its rollout of iOS 10, although some of its older mobile devices aren't eligible for the update, and will be left running iOS 9. Shortly before iOS 10 was released, Apple's official data indicated that iOS 9 had made it to 88% of the company's active mobile devices, a year after that OS version was first made available.

Last year, it took iOS 9 just three days to reach a 50% adoption rate, making it the fastest iOS rollout ever. It looks like iOS 10 hasn't rolled out at quite the same pace as its predecessor; according to the Apple Developer site, iOS 10 had reached 54% of devices by October 7, three and a half weeks after its release. 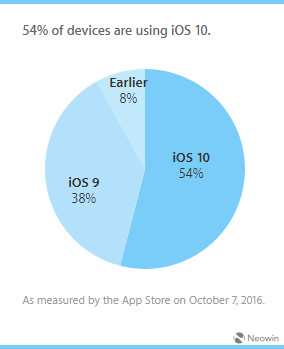 That's not as impressive as the iOS 9 rollout, but that's still a significant proportion of devices that have upgraded to the latest version of the OS in a relatively short space of time.

With iOS 10 now on more than half of the company's active mobile devices, iOS 9 has fallen to 38%. iOS 8 and earlier versions of the operating system were installed on a total of 12% of devices last month, but this has since fallen to 8%.

Among those devices running iOS 10 are the new iPhone 7 and 7 Plus, which Apple released last month. Be sure to check out our review of the iPhone 7 Plus here, and if you're in a particularly fruity mood, you might also want to take a look at our review of the Apple Watch.