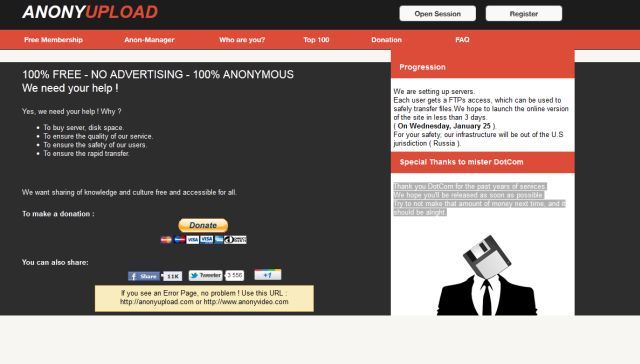 Anonymous went on a big cyber attack spree last week, shutting down a number of major government and entertainment trade group web sites in retaliation over the US government's shut down of the Megaupload file sharing web site. Now it appears that Anonymous, or at least a sub-section of the hacker group, wants to launch a file sharing site of their own.

The AnonyOps Twitter page posted up a note on Sunday that stated, "Fighting back - The completely Anonymous version of Megaupload." A link on the Twitter page goes to Anonyupload.com, which currently has a placeholder page describing what the organizers say they want to offer users; namely free file server space with no advertising.

The web site is currently looking for donations  to buy server space for their version of Megaupload. There's even a message directed to the now jailed founder of Megaupload, Kim Dotcom. It states:

Thank you DotCom for the past years of services. We hope you'll be released as soon as possible. Try to not make that amount of money next time, and it should be alright.

The placeholder page states that the servers will be based in Russia. Anonyupload claims to have a Wednesday, January 25 launch date in mind for the full site.

There's no telling if this web site is really a part of Anonymous or is just a hoax but if it's not we bet that government officials will do their best to shut it down quickly.

Thanks to nicias vandyck for the tip