As powerful as the Tegra 3 chipset is, Nvidia seems to be planning something substantially better; as yesterday, a user by the name of “Xenomorph” shared an image on Weibo, China’s Twitter equivalent. For now, we know the chipset is called “Wayne,” as in Bruce Wayne from Batman. The name "Wayne" ties well into the list of superhero-themed names for upcoming Nvidia chipsets, so this is looking pretty authentic, even if we can't confirm.

From the image, we know that it will come with Nvidia’s 4-Plus-1 technology which means it’ll sport four cores, with a fifth core designed to conserve battery. The CPU itself has been described as a “Quad Core Eagle” meaning it’ll be based on the ARM Cortext-A15 architecture. 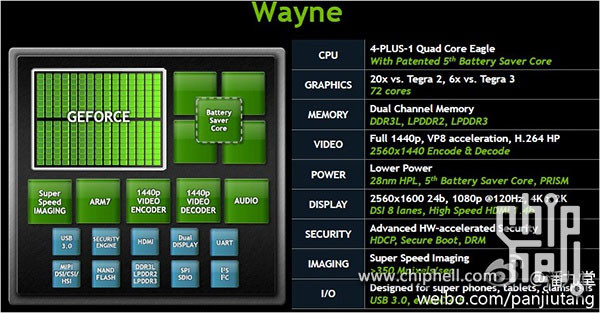 Surprises and improvements don’t just stop there; the leak reveals that Wayne could offer 72 graphics cores, six times as many found in the Tegra 3. Aside from this, the chipset would support resolutions of 2,560 x 1,440 and USB 3.0.

As a slight estimation of how much of an improvement this could be on performance, we can take the HTC One X+, with the Tegra 3 (based on the Arm Cortex-A9 architecture) and double it. We feel the A9 will feel substantially slower compared to the A15.

We have no idea of when we’ll see the Tegra 4 featured inside a device, but we’re hoping to see one at CES 2013 in January.