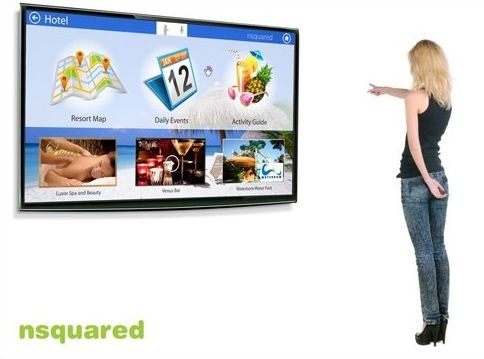 While Microsoft might be developing a new version of Kinect for Windows for a 2014 release, the current version of the Kinect hardware and software SDK is still being used by a number of companies worldwide. One of them is Australia-based nsquared which has come up with a product designed to help people at their favorite hotels.

If you are a frequent traveler, you might have seen that some hotel lobbies now have large touchscreens that offer information about the hotel's activities, schedules and other tidbits. In a post on the Kinect for Windows blog guest-written by members of nsquared, they talk about some of their products, including their hotel kiosk screen.

The screen incorporates the Kinect for Windows hardware so that it can duplicate the functions of a large touchscreen kiosk by using the hand gestures supported by Microsoft's device. The blog states, "Guests can browse through images and videos of activities, explore locations on a map, and find out what's happening with a live event calendar. It also provides live weather updates and has customizable themes." Because the screen is just a regular LCD display, the Kinect-based product from nsquared will cost less than half that of a touchscreen display of the same size.

nsquared is also working on other Kinect products, such as Sky Spelling, an educational game for kids that lets them fly on screen as a dragon, a biplane, or a butterfly. The idea is that kids move their bodies to spell words on screen as those flying characters.