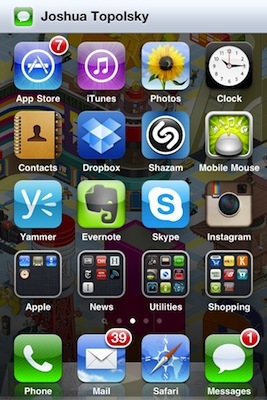 Right before Apple's WWDC presentation, Thisismynext has reportedly recieved a slew of new information on what we can expect to see at today's event. For those unfamiliar with the website, Thisismynext comprises big names such as former Engadget editor Joshua Topolsky. Usually, such news would be ignored as a small blog trying to grab some attention, but these rumours are coming from a source sure to have reliable connections in the world of tech news.

As expected, the notification system will receive an overhaul, but unlike other mockups floating around, the final version will have more of a white gradient effect. Like Android, notifications will be accessed by swiping down from the top of the screen. This new swipedown screen will also house a selection of widgets such as stocks and weather, allowing for quicker access to small chunks of information.

The lock screen is also being enhanced. Notifications will cluster on the lock screen, and users can jump straight to the app in question by dragging the app icon from the left across the screen. The gesture will be similar to unlocking the phone and should be intuitive for users familiar with iOS.

Most interestingly, however, is an overhaul of the SMS/MMS system. Similar to RIM's Blackberry Messenger, iOS 5 will be able to detect other iOS users and route messages accordingly. This could be a big blow to both RIM and mobile networks, but so far nothing else has been said on this rumour. Third party apps can already let iOS users communicate for free, but from the sounds of it this would be a much slicker approach.