Lenovo makes a wide range of digital assistant devices, some of which use Amazon Alexa and some of which use Google Assistant. What's really interesting is that the company is investing in more innovative form factors than first-party OEMs like Amazon and Google.

The Yoga Smart Tab was first announced at IFA last year, and it's both a Google Assistant smart display and an Android tablet. This dual functionality is what's really interesting to me, because smart displays and tablets are both things that I don't use frequently, but I do like to use. Combining those into one device makes a lot of sense.

Lenovo had a similar product last year called the Smart Tab P10, although that one used Amazon Alexa (no, I don't know why it chooses which assistant for which device, and no, Lenovo doesn't offer the same device with an option in assistants). That was actually a more standard tablet that sat in a speaker dock to become a smart display, whereas this is all one device.

Ultimately, I found the Yoga Smart Tab to be the perfect smart display/tablet to keep in my living room.

I have to say that when I first saw this device last year ahead of IFA, I was unimpressed. It just looks kind of awkward, and it doesn't really look like something that would be really good at anything. But after using it, I'm completely sold. 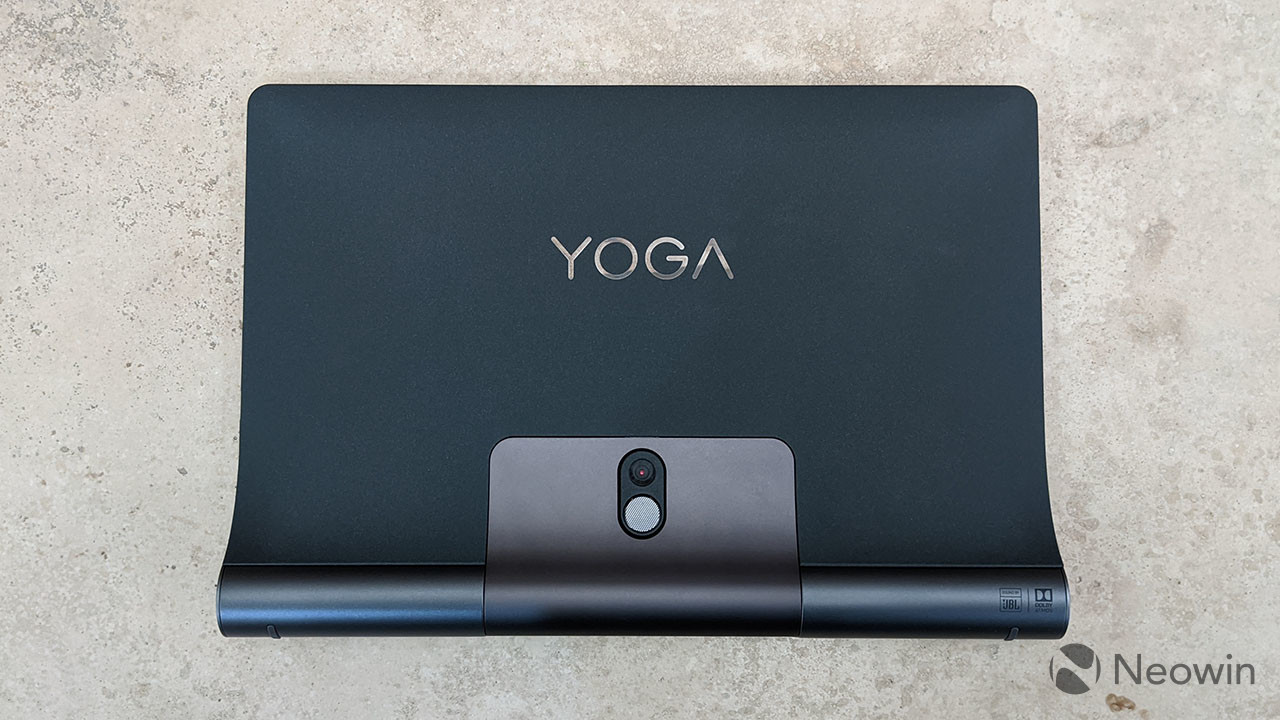 What's strange is that it has a really thick base, and part of that base folds out as a kickstand. What makes this unique is that you can actually use the tablet in different form factors based on how you fold that kickstand. In fact, you can even hang it on the wall if you want, which is quite nice with the Google Photos integration.

I really thought it would be strange to use a tablet with such a wide base. After all, like anyone that's used a tablet, I'm used to that familiar and flat form factor that's been used on every tablet since ever. As it turns out, the thick base makes it really comfortable to hold the tablet one-handed. 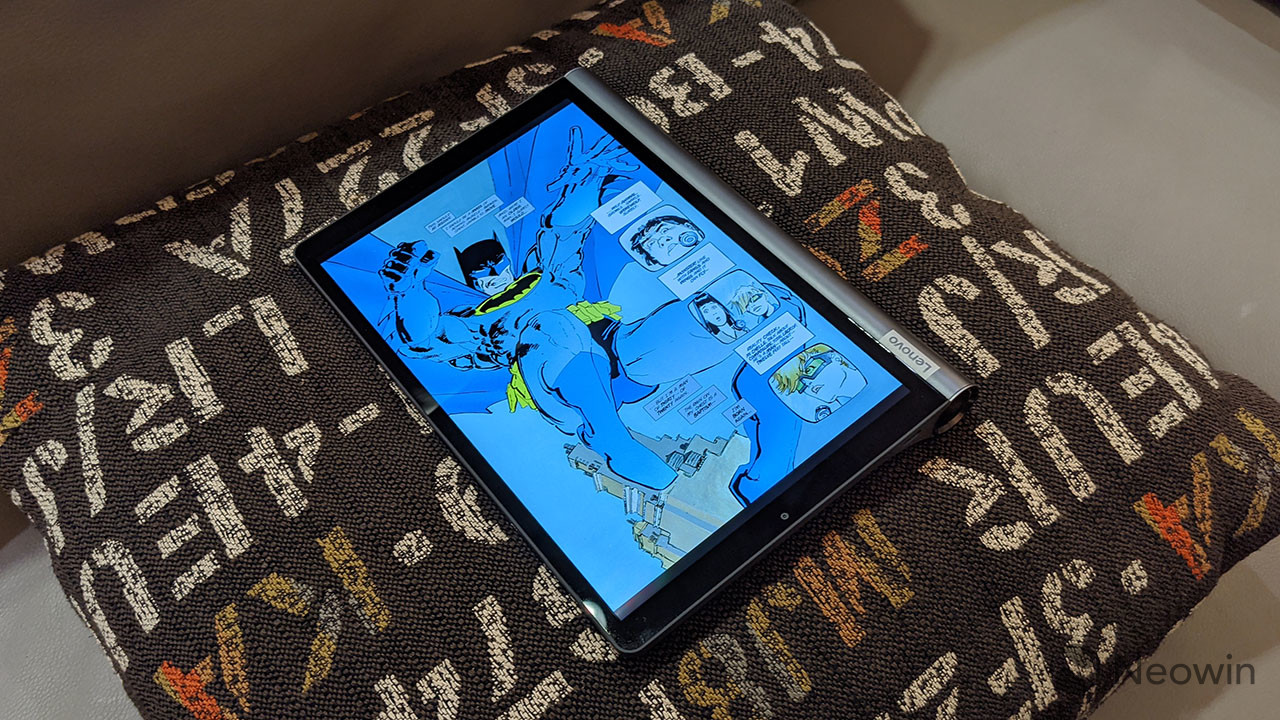 I'm actually going to refer to the base as the spine because it reminds me of Amazon's Kindle Oasis, an e-reader that I love for the exact same reason. And that's how I want to use a tablet. I want to use it as an e-reader for books, for comic books, and just for general consumption. This form factor probably doesn't make sense when you first look at it, but it absolutely does when you use it. 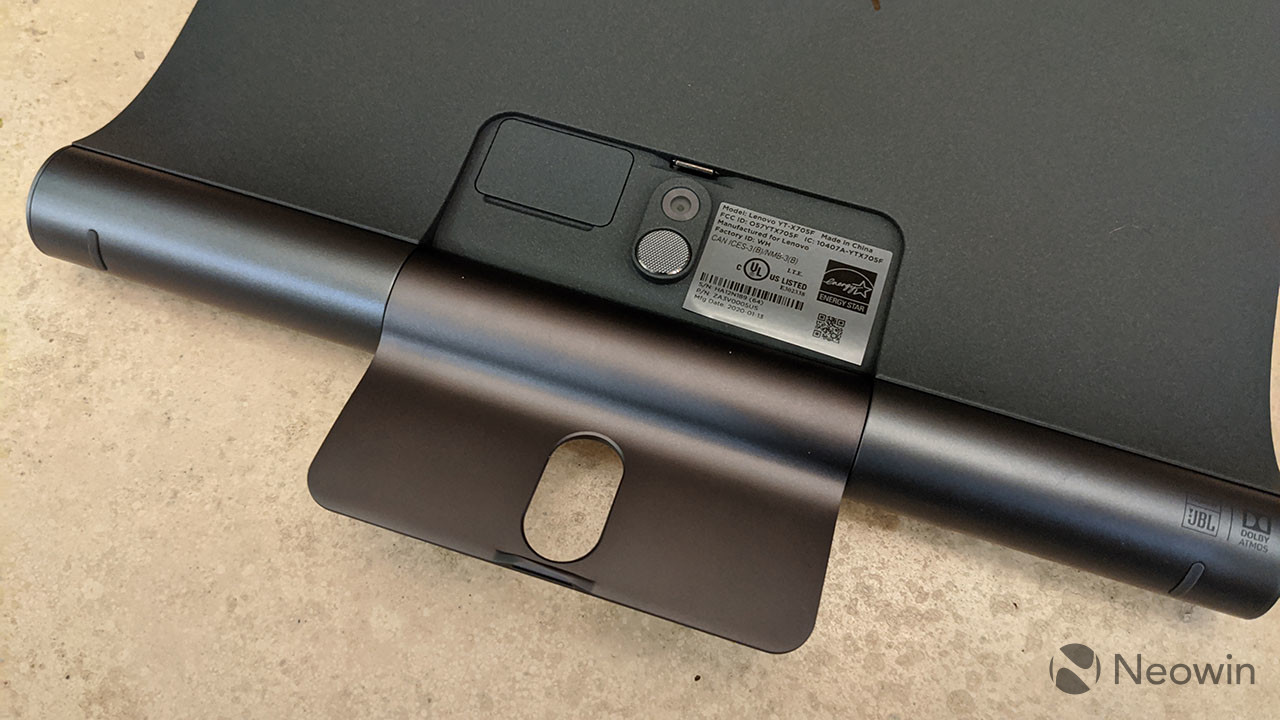 Underneath the small kickstand in the back, which is popped open with a button, there's also a small flap that will let you add a microSD card. Apparently, there's a cellular model too that would let you include a nano-SIM card, but Lenovo didn't send me that one. It's an interesting option, since this doesn't seem like the type of device that you'd take on the go as much as you'd keep in your home.

The screen is pretty standard at 10.1 inches with a Full HD+ resolution (1920x1200), and it has pretty standard-sized bezels. I'd say it's about what you'd expect from a $299 device, getting the job done with accurate colors and a high resolution, but not going overboard with premium features like OLED or 4K resolution.

The lack of OLED was one thing that I complained about on previous Lenovo smart displays, since you'd see a clear backlight when it only showed the time. This one doesn't seem to adjust when you turn the lights off; instead, it just turns the screen off, so it's not an issue. In fact, I ran into some issues with Google's Assistant's ambient mode, but we'll get into that later. 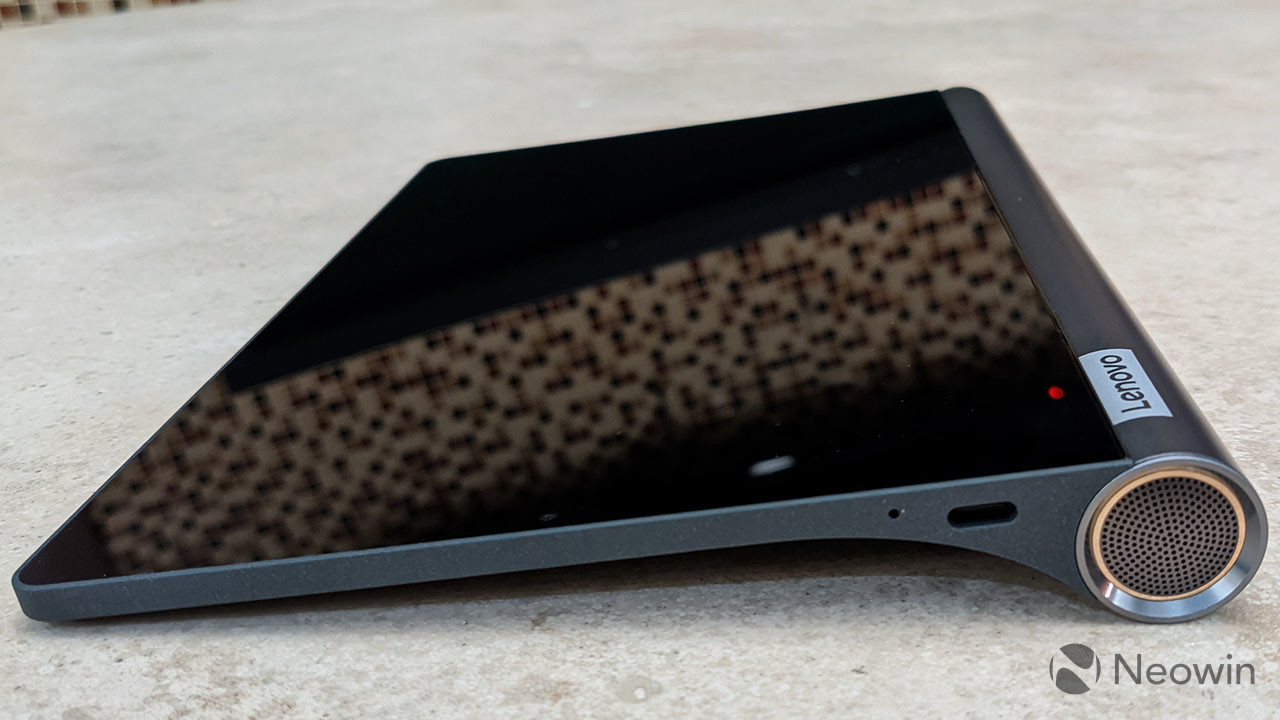 The speakers are on either side of the base. The Yoga Smart Tab uses dual JBL HiFi speakers that are optimized by Dolby Atmos, and you can use the Dolby Atmos app to optimize the sound. The speakers are clear, but they're not exactly loud enough to rock the house. I'd say that they're perfect for some nice ambient music. 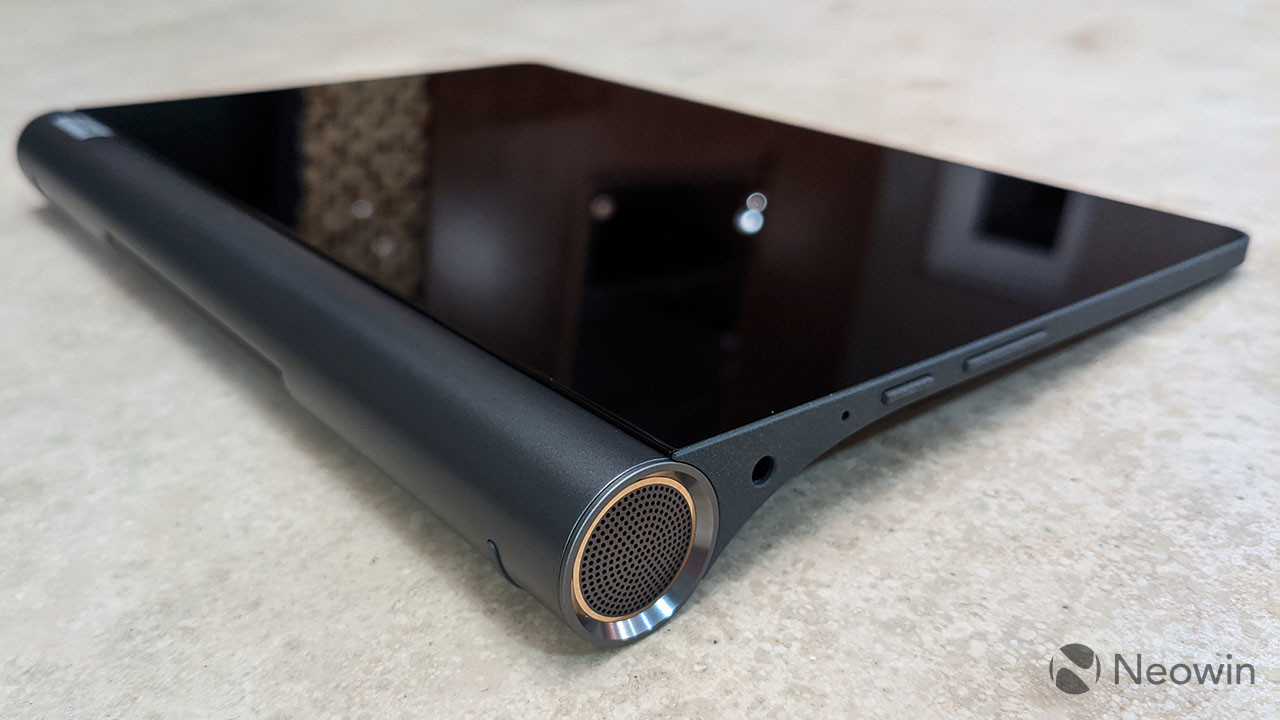 For charging, there's a USB 2.0 Type-C port on the side. This placement actually makes it really hard to hang the Yoga Smart Tab on the wall without it being crooked, but it is what it is. On the other side, there's a 3.5mm audio jack, a power button, and a volume rocker.

While the Yoga Smart Tab does have far-field microphones that will let you talk to Google Assistant, there's also an ambient mode that will show Assistant while you're not using the tablet. Strangely, you have to jump through some hoops to turn it on.

You'll need to go to Settings -> Google -> Account Services -> Search, Assistant & Voice -> Google Assistant -> Tablet -> Ambient Mode. Yes, I had to look it up to write the steps for this review, as it's not a simple thing. 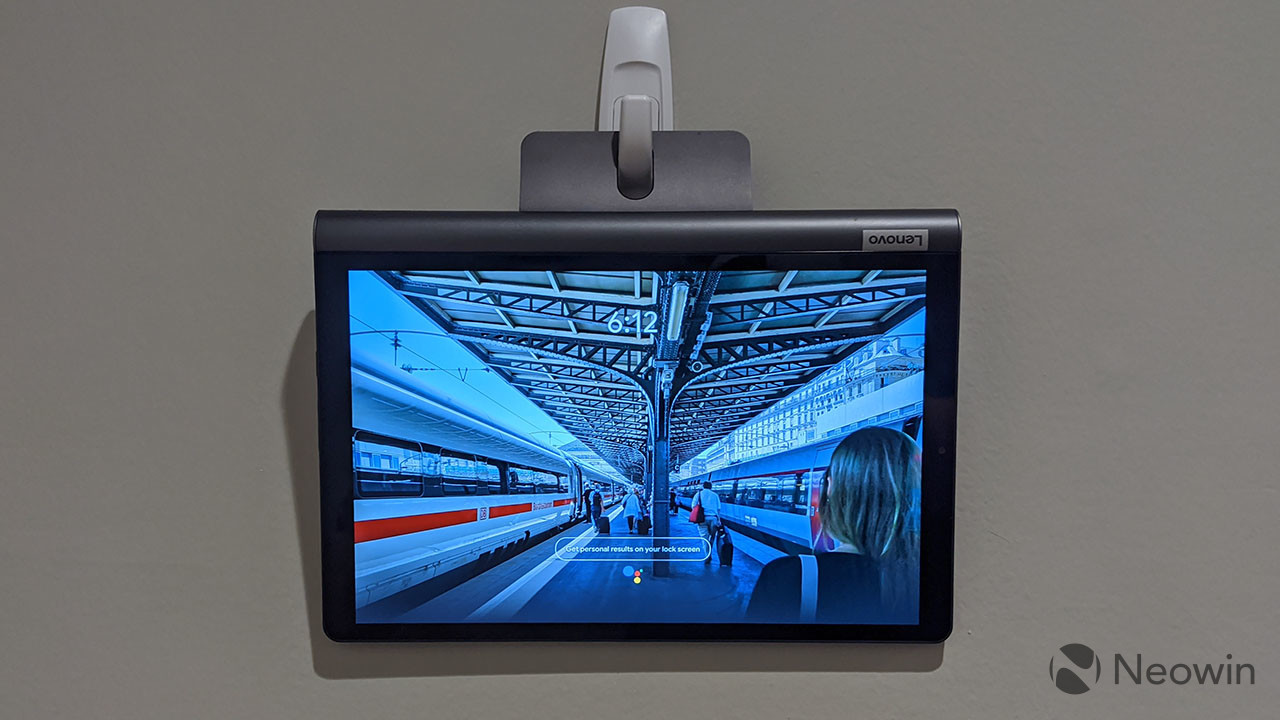 There's also a toggle to show ambient mode when the kickstand is open, and one to use it as a photo display when it's charging. Honestly, this whole setup is kind of a mess, and I think that's Google's fault, not Lenovo's. For one thing, Google Photos albums will start displaying whether it's charging or not. Also, sometimes they just won't.

In addition, strangely, you'll want to make sure that the screen saver option is off in Settings. For some reason, this was on by default on the device that Lenovo sent me, so after a while, it would just switch to this weird colorful screen.

The ability to use a smart display as a photo frame is something that Google is uniquely qualified to offer, since Google Photos is just awesome. Google Photos automatically takes your images and categorizes them by people, places, and things. It also makes albums based on events, so when you go to choose what you want to see on the ambient display, it's simple to just pick the albums or people that you want. 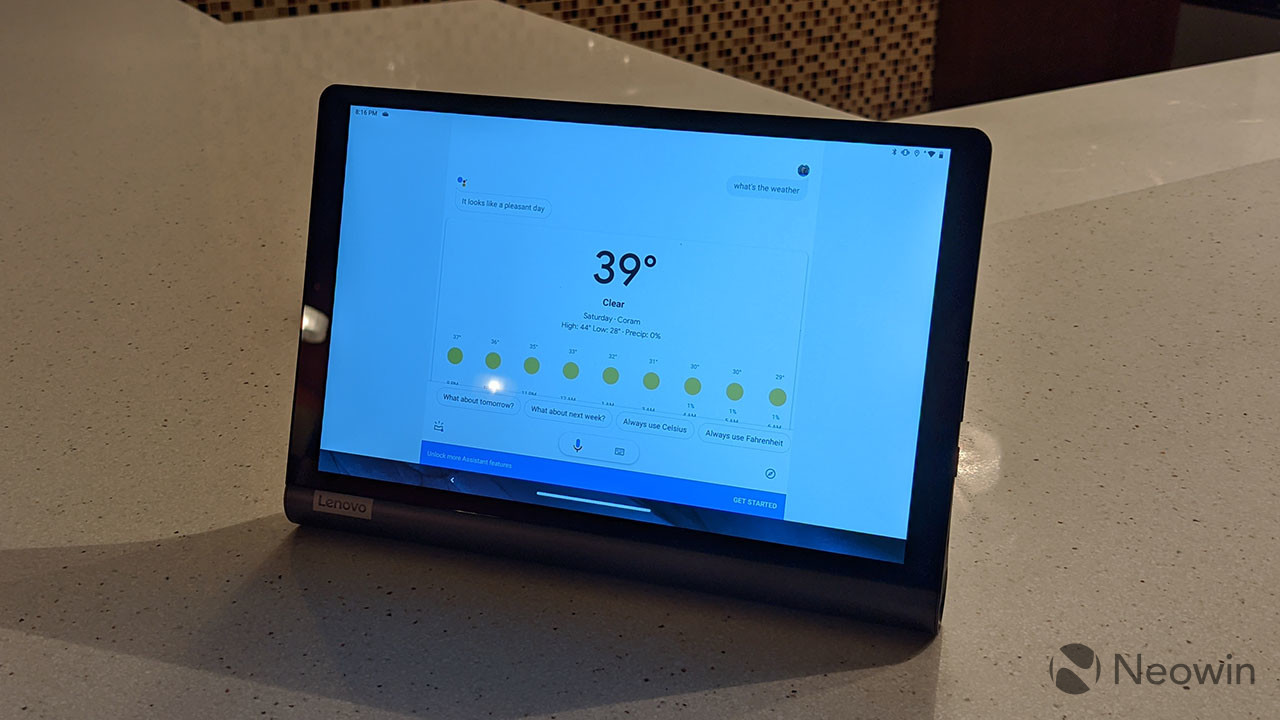 The whole Google Assistant aspect of things is great because that works all the time with the far-field microphones. You can ask the weather and rather than just having it read back to you, you can actually see a full forecast. You can also have Assistant guide you through recipes and such.

Ambient mode needs some work on the software side of things though. It's just inconsistent about when it works. With the Smart Tab P10, it was easy enough to just pull the tablet from the base, use it, and put it back when done. With the Yoga Smart Tab, it should go back to being an ambient display when you plug it in and open the kickstand, but it doesn't always do that.

As I mentioned earlier, what I really want a device like this to be good at is consumption. It's great for reading or watching movies and the like. It's right there in your home when you need it, so you can easily just pick it up and start using it for what you want to do.

I also played some games on it using Microsoft's Project xCloud game streaming service. The cool thing about game streaming is that it's meant to be wherever you are on whatever device you're using, so why not a tablet? 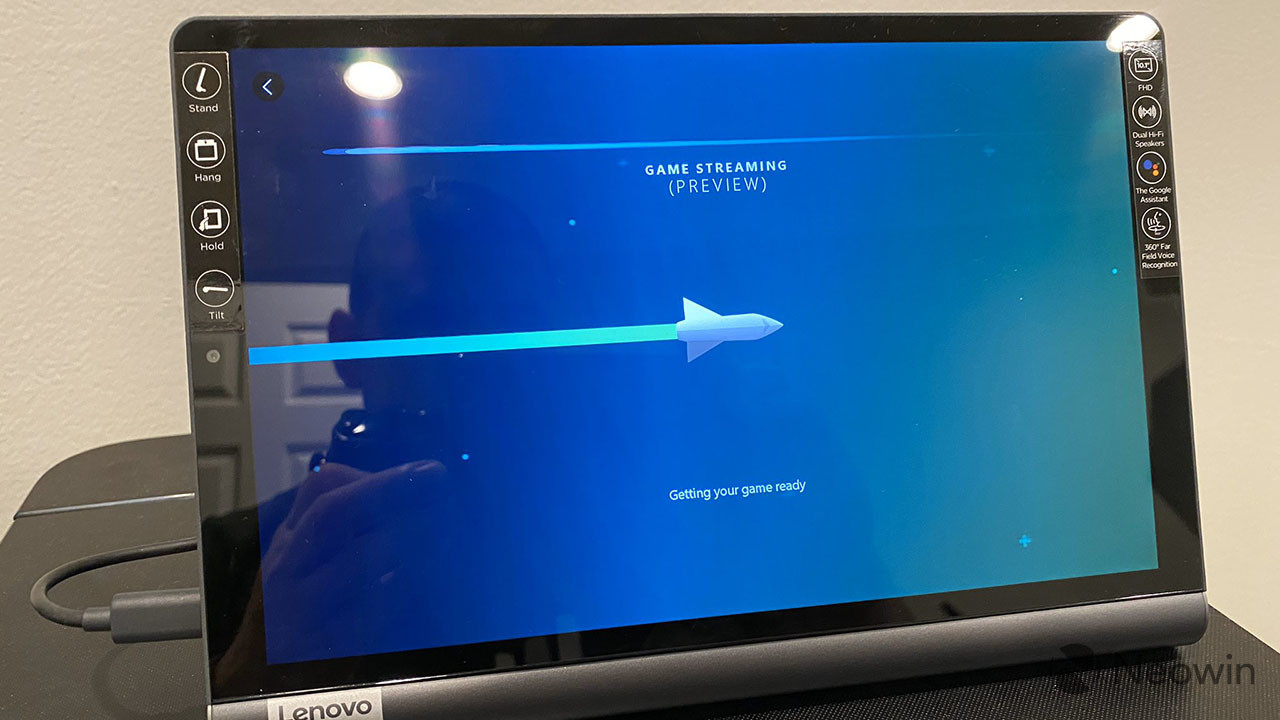 It worked great, although there were some natural hiccups that come with a service that's in preview like that. All you have to do is pair an Xbox Wireless Controller, launch the Xbox Game Streaming app, and you can just start playing. Since the tablet has a built-in stand, you don't need to worry about some external case or trying to balance it against something.

I really wanted to bring up that idea of game streaming because it's just one more thing that you can do with the Yoga Smart Tab. There are really quite a few use cases for this thing.

The Lenovo Yoga Smart Tab uses a Qualcomm Snapdragon 439 chipset and 4GB RAM. The SoC has eight Cortex-A53 cores, and it sits on the lower end of the mid-tier. That's part of the reason that I added that section about game streaming. This isn't a top performer, and it's not meant to be, but with new technologies where the compute can be done in the cloud, the device gets more performant just by being connected.

The question of performance on a tablet always comes down to what you want to use it for. I mentioned that I'd want to use a device like this for consumption, and it's great at that. You really don't need a lot of resources to turn the page of a book or to stream a movie on Netflix, and you don't need a lot of resources to access Google Assistant. 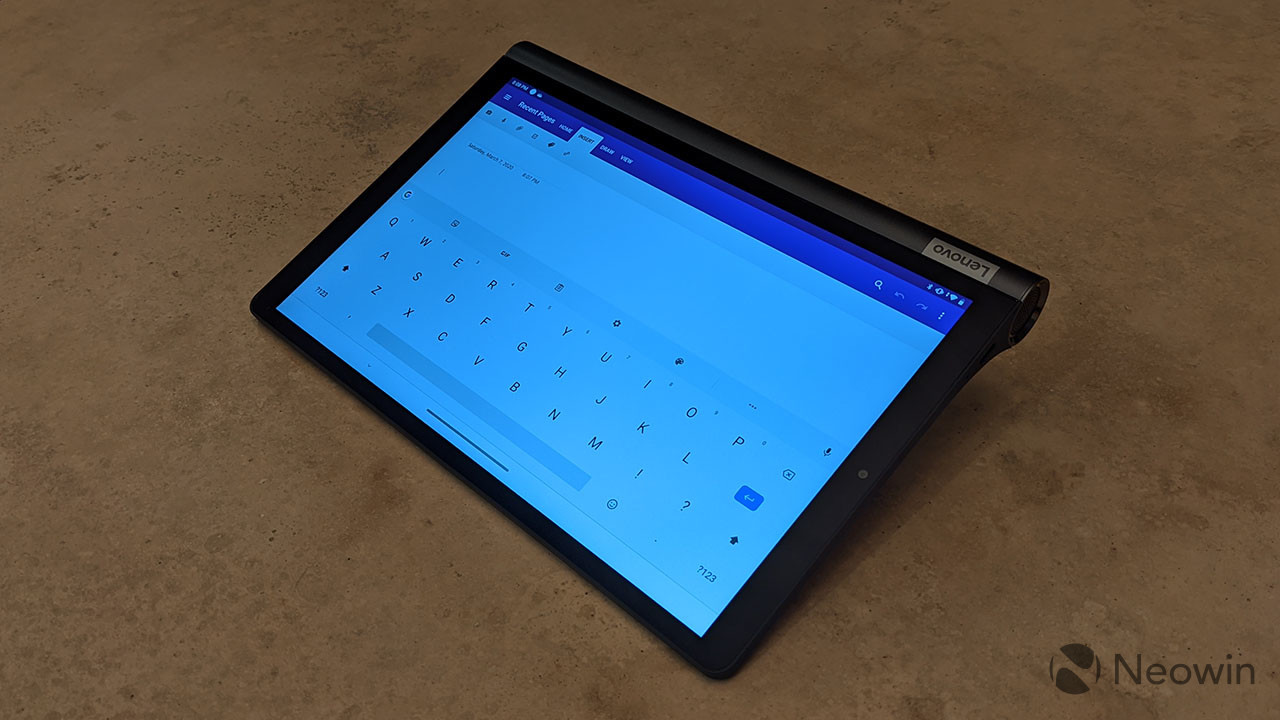 What you would need more power for is actual productivity or creativity work. That's not what this device is for. If that's what you want, get a Surface Pro that has an attachable keyboard and pen support.

I didn't do any battery testing, because I don't think it applies to the Yoga Smart Tab. It does have a 7,000mAh battery if you need it, but this thing is going to be plugged in most of the time. That's the whole idea. It can sit on its stand while not in use, and then you can grab it when you need it.

For benchmarks, I used Geekbench 4, Geekbench 5, and GFXBench. Geekbench 4 and Geekbench 5 are similar tests that check the CPU, but they score the results differently, so it's worth looking at the older Geekbench 4 if you want to compare it to older devices.

I honestly didn't expect to like the Lenovo Yoga Smart Tab so much. Sure, I knew it was going to be another Google Assistant smart display, and I do enjoy those. I particularly like Assistant smart displays for the Google Photos integration, because they serve as a way to show meaningful photos that tend to get buried under thousands of memes in our camera rolls. 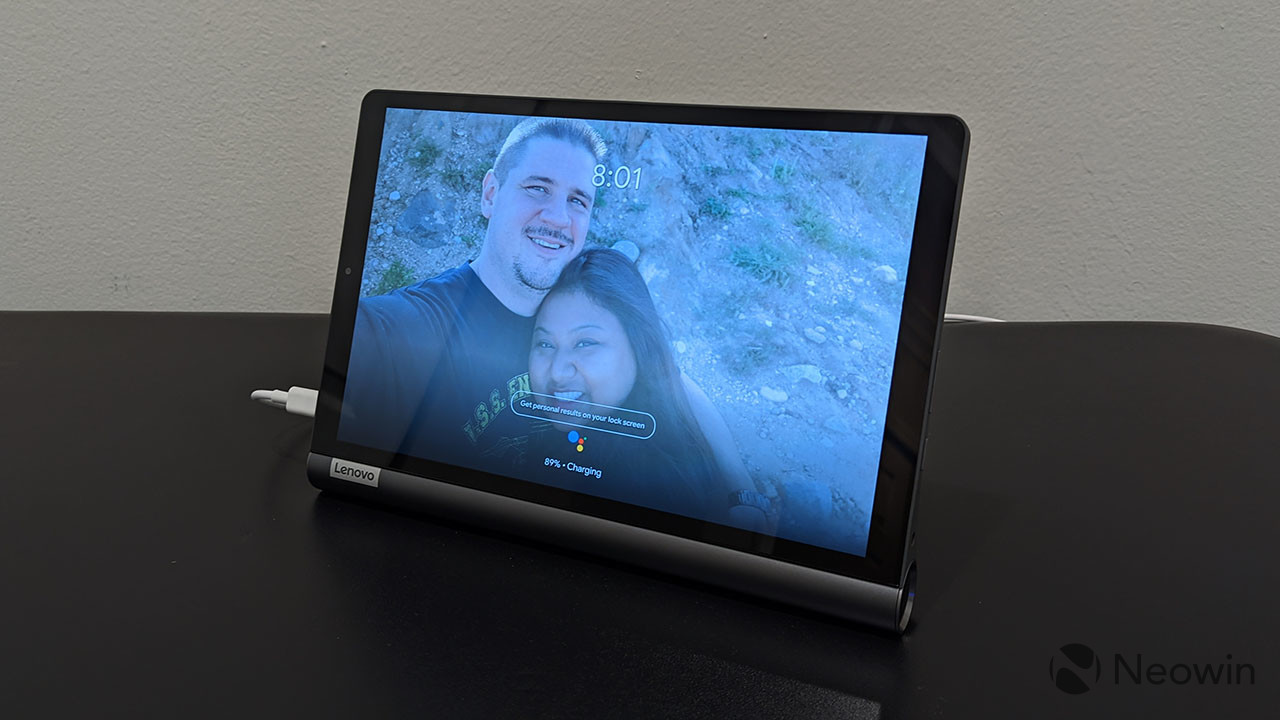 But it's also a really good tablet. The spine, as I call it, makes it comfortable to hold. You'll be surprised at how good of an e-reader this thing is. So, let's put it this way: it's a smart display, an e-reader, a general tablet, a digital picture frame, a gaming console, and more, and it costs $299.

I would take just two of those above categories to make the Yoga Smart Tab worth the price. But really, it's an all-in-one personal entertainment hub. Sure, it's not very powerful, but it makes up for it in the right areas.

Let's just hope that Google works out some of the bugginess with ambient mode. Aside from that, I can easily recommend the Lenovo Yoga Smart Tab. If you want to check it out on Lenovo.com, you can find it here. 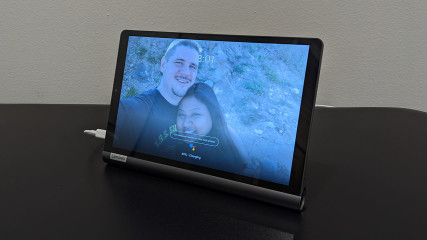 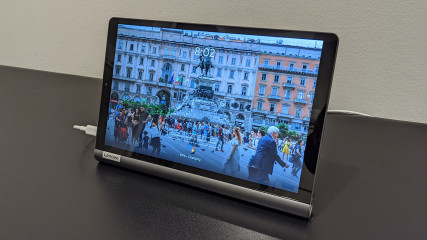 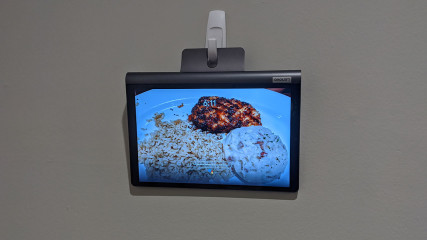 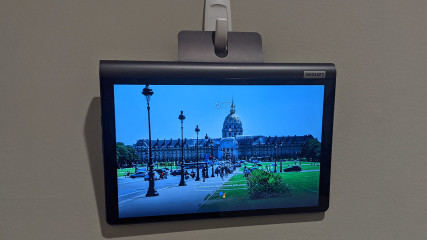 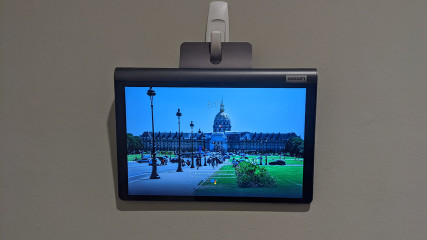 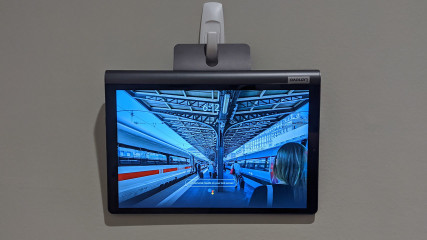 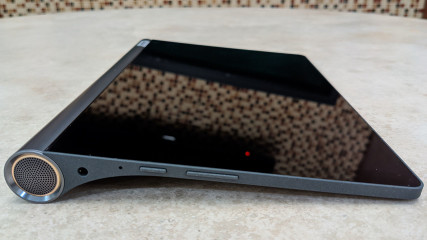 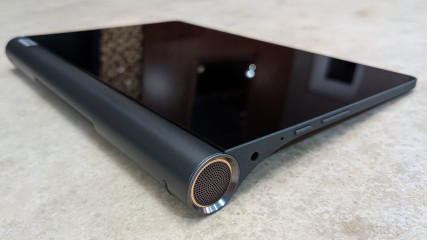 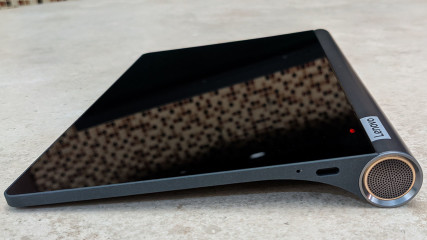 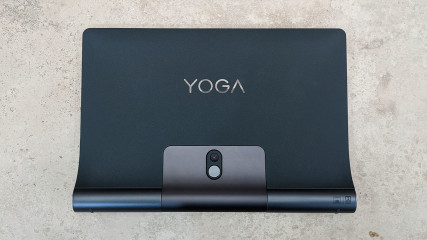 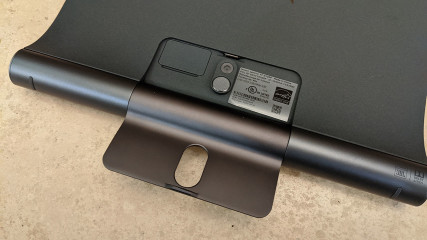 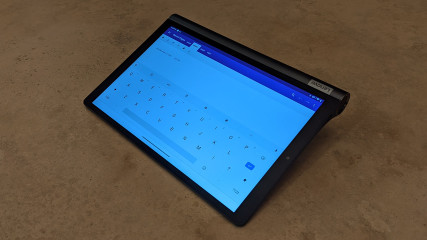 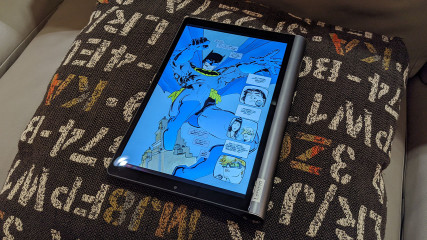 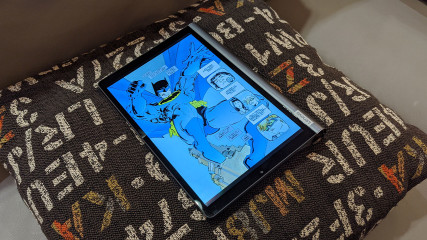 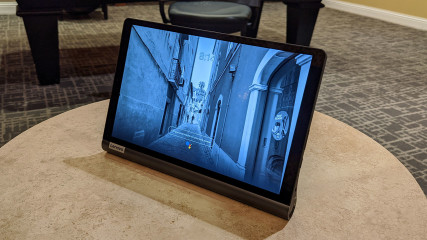 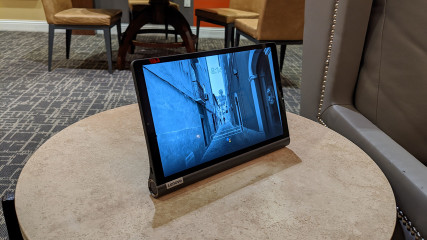 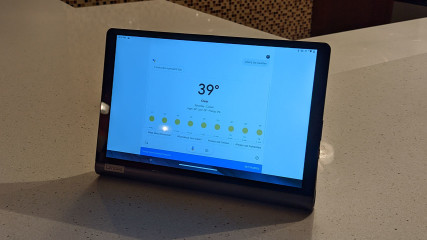 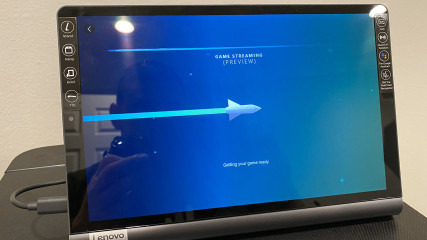