LG's gram series of laptops have always been winners in my book, even if they're not the sexiest of devices. They're among the lightest in their class, but they don't make the compromises that other thin and light PCs make.

The gram 14 2-in-1 is the firm's first convertible, and it comes in at 2.53 pounds. While there are certainly lighter clamshell laptops out there (the gram is one of them), this is the lightest 14-inch convertible that I know about. And no, that's not a challenge to go find one that's lighter.

Announced at CES this year, it still doesn't make compromises. Usually, the first thing to go on a light PC like this is USB Type-A, but the gram has two of them. The trackpad is still clickable, and it has a full U-series processor.

Interestingly, this is the only configuration available for this PC. For the specs, it's a pretty solid price at $1,499.99.

The gram 14 2-in-1 comes in a color that LG calls Dark Silver, but it's really more of a gunmetal gray. It's made out of a magnesium alloy that feels suspiciously like plastic. In fact, when showing it to other people, they swear that it's plastic. Naturally, the material of the body is a major factor in the weight.

But this thing weighs just 2.53 pounds, and I don't know of a lighter 14-inch convertible PC. Last year's 15.6-inch gram that I reviewed was just 2.4 pounds, while the 13-inch model is just 2.1 pounds, but we're talking about convertibles here. 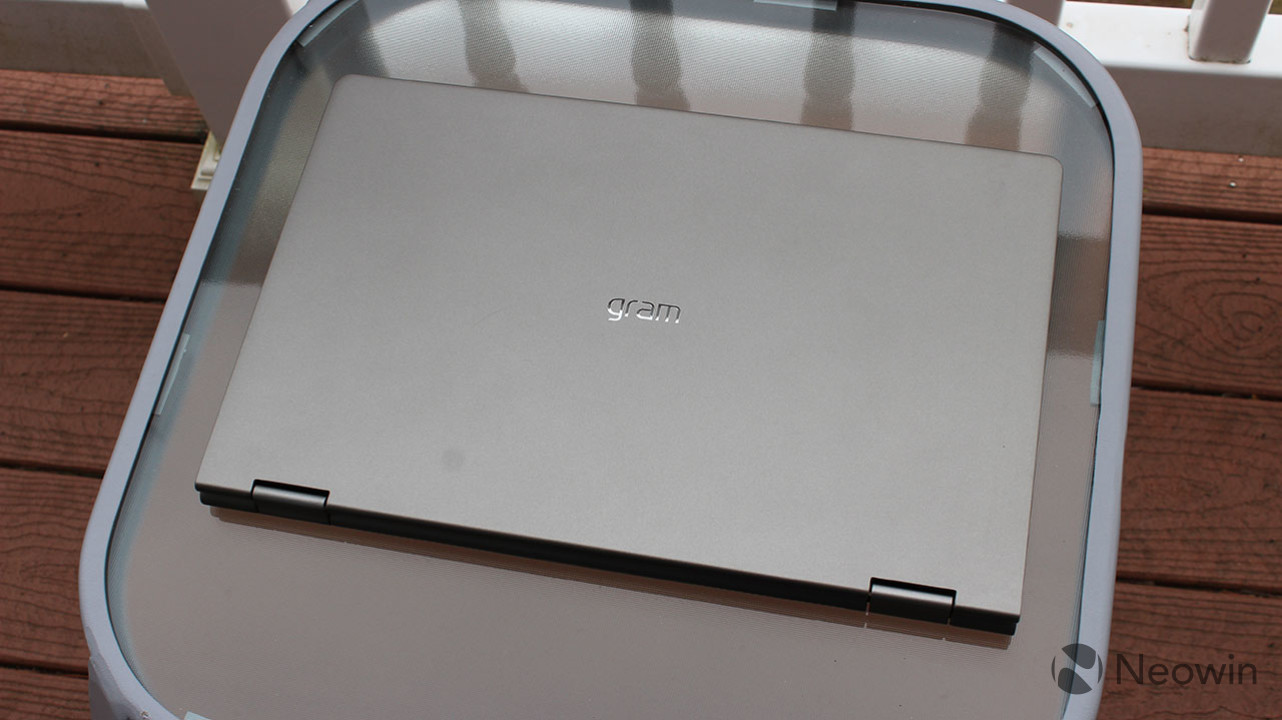 Even if it doesn't really feel solid, LG says that it's MIL-STD 810G tested for seven durability tests, including shock, high temperature, dust, salt fog, low pressure, low temperature, and vibration. Note that it doesn't say it could take a drop or anything. The build quality does feel a bit cheap, but again, that's to be expected if you want something that's so light.

Functionally, there really aren't any compromises. Typically, something that aims to be the lightest around also wants to be the thinnest, sacrificing USB Type-A, other ports, a clickable trackpad, the touchscreen, and the U-series processor, opting instead for the fanless designs offered by a 5W Y-series chip. 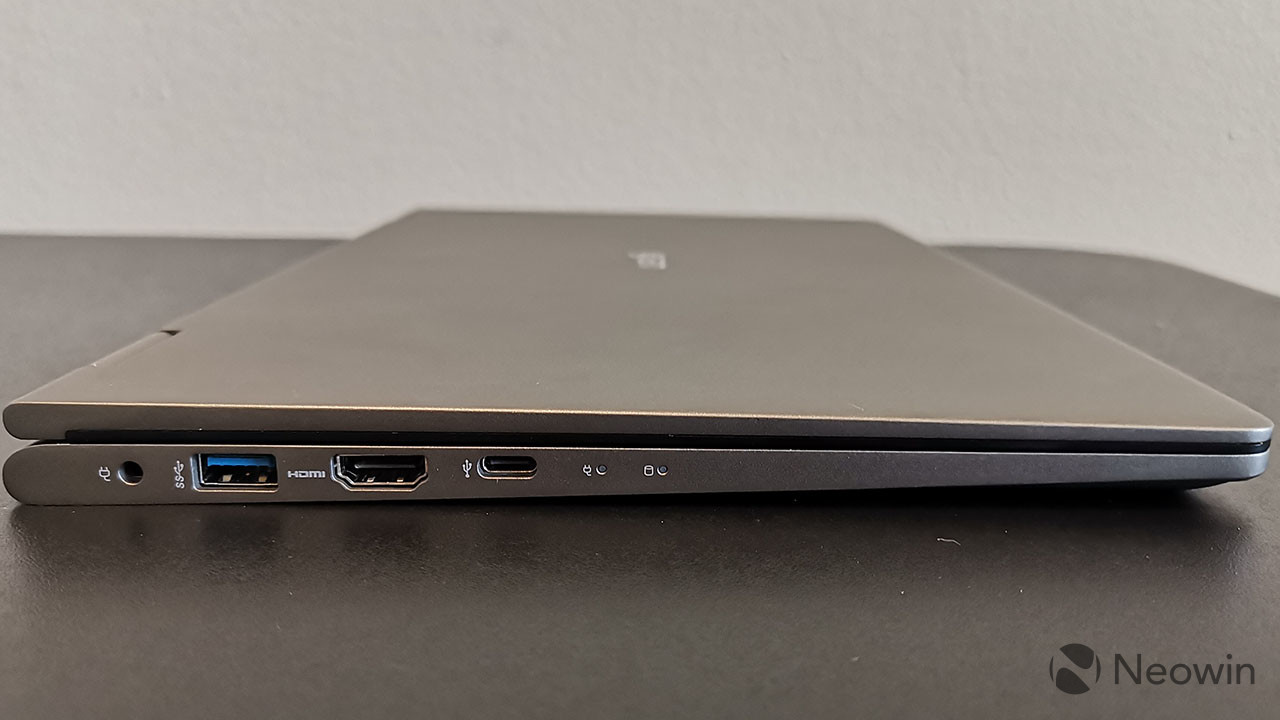 So, here are some sacrifices that were made though. For one thing, the USB Type-C port is not Thunderbolt 3, which is a real bummer. Thunderbolt 3 offers data transfer speeds of 40Gbps, and you can use it to connect the device to two 4K displays, or a single 5K display. Also, USB 3.1 Gen 2 would be nice, as that would at least offer 10Gbps speeds, and that should be in both the Type-A ports and the Type-C port. I suspect that these sacrifices were made to hit the price point though, and not the weight. 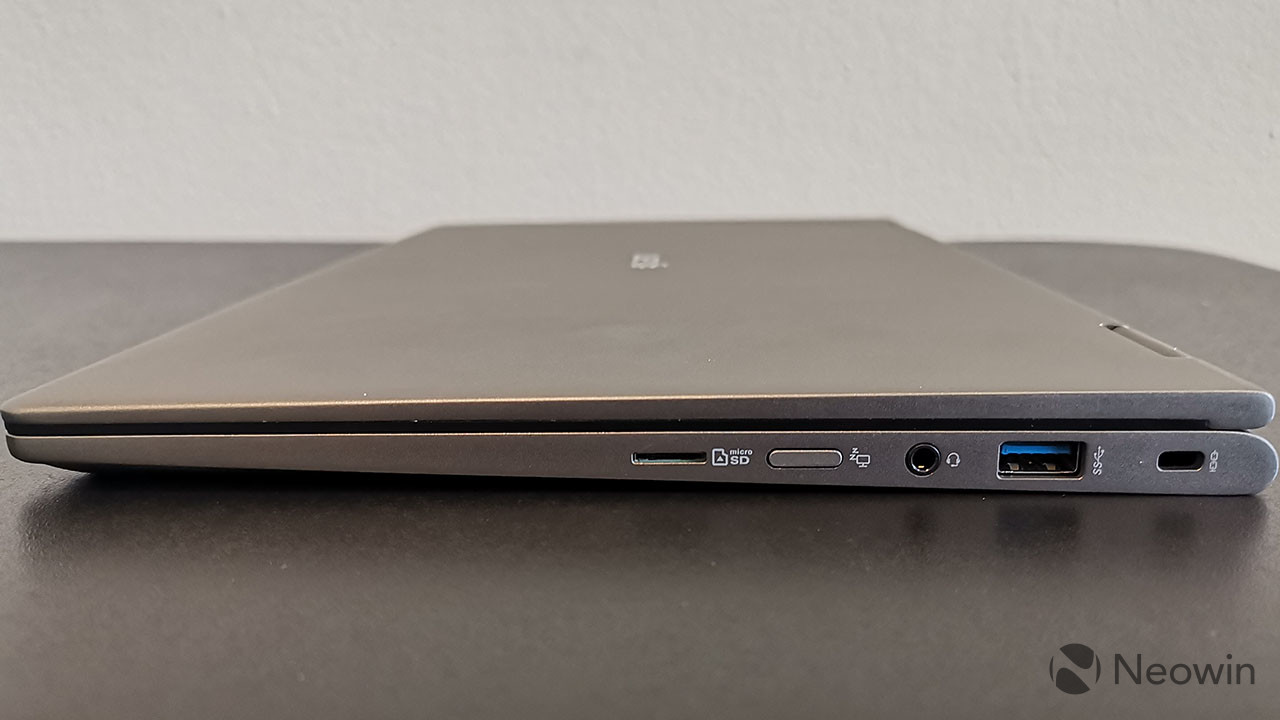 On the right side, there's another USB 3.1 Gen 1 Type-A port, a 3.5mm combo audio jack, and a microSD slot. There's also a button to put the PC to sleep, which is not the power button, for some reason. Personally, I'm not sure why that button exists, except maybe that it's easier to wake the device when in tablet mode; however, you'll still need the fingerprint sensor on the power button.

As usual for the gram lineup, the 14-inch display is only offered in 1080p. In fact, the new 17-inch clamshell, also announced at CES, is the first gram to have a higher resolution. There's some good and some bad here. 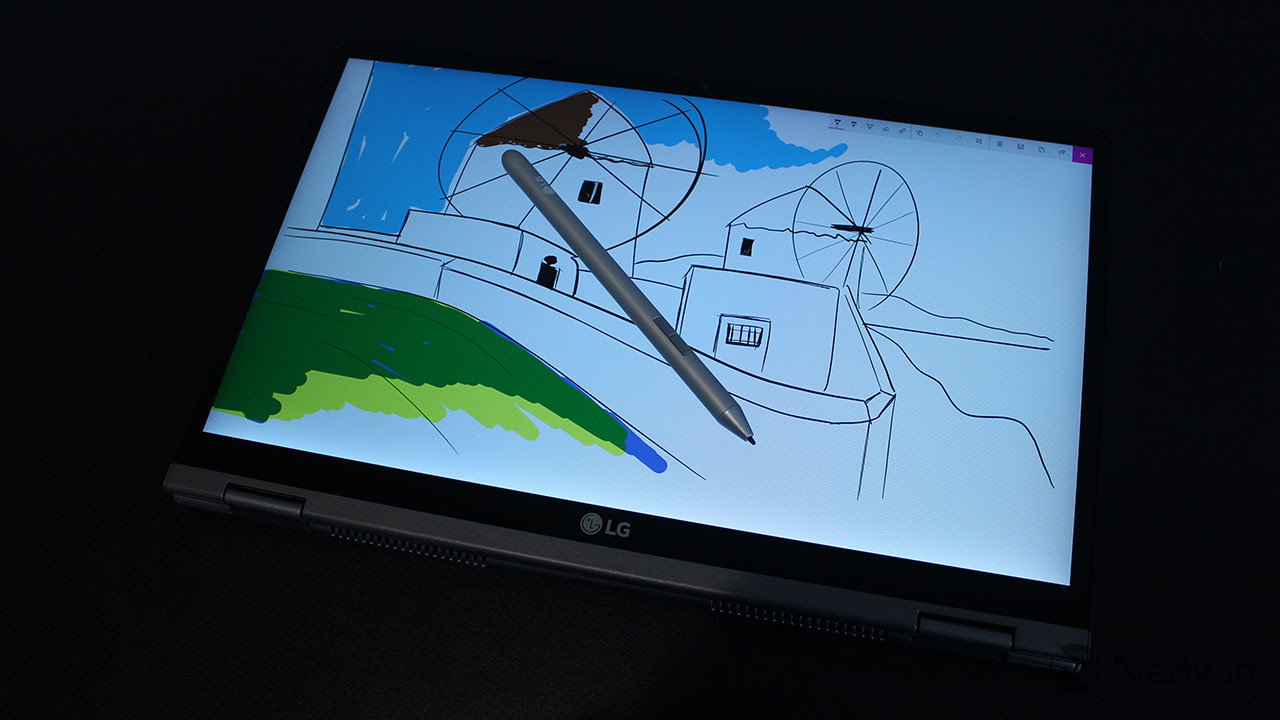 One thing that's really nice is that the glass actually feels premium, and it's comfortable to write on with the pen - or at least as comfortable as it can be writing on glossy glass. The last gram clamshell that I used had a screen that felt really cheap to touch, and it's not something you'd want to write on. I'm glad that changed for the 2-in-1.

The bad is that this is not a bright screen. All of the outdoor images that you see in this review are with the brightness turned all the way up, and this thing is unusable outdoors. 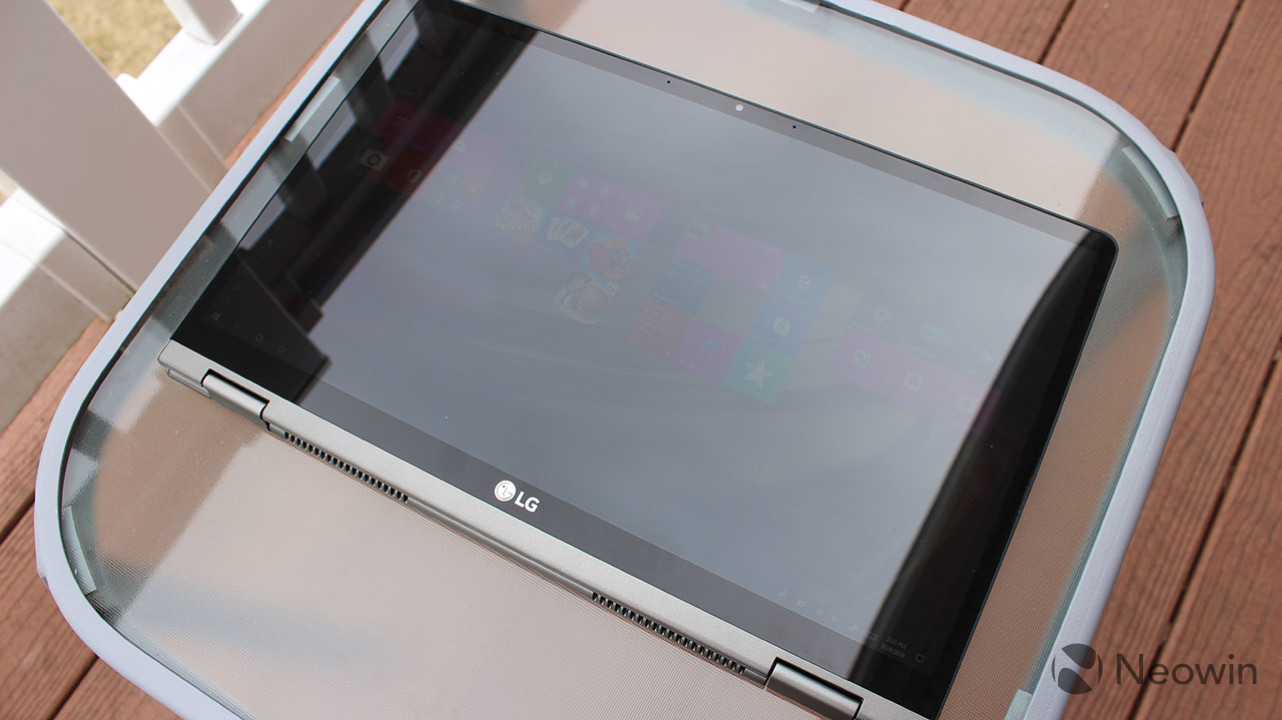 As far as things like color accuracy go, it's fine. The real problem is that I'd prefer an option for a higher resolution at this size, and it really needs to be brighter.

Naturally, it supports pen input, and the pen comes in the box. Unfortunately, there's no actual way to attach the pen to the device, so you just have to make sure that you have it with you.

The LG gram 14 2-in-1 uses standard chiclet-style keys, and I'm just going to say it. They're really ugly. The orange characters on the function keys and the blocky letters just look terrible. Luckily, none of this affects the actual functionality of the keyboard itself. It's an aesthetic thing, and I do think it matters. 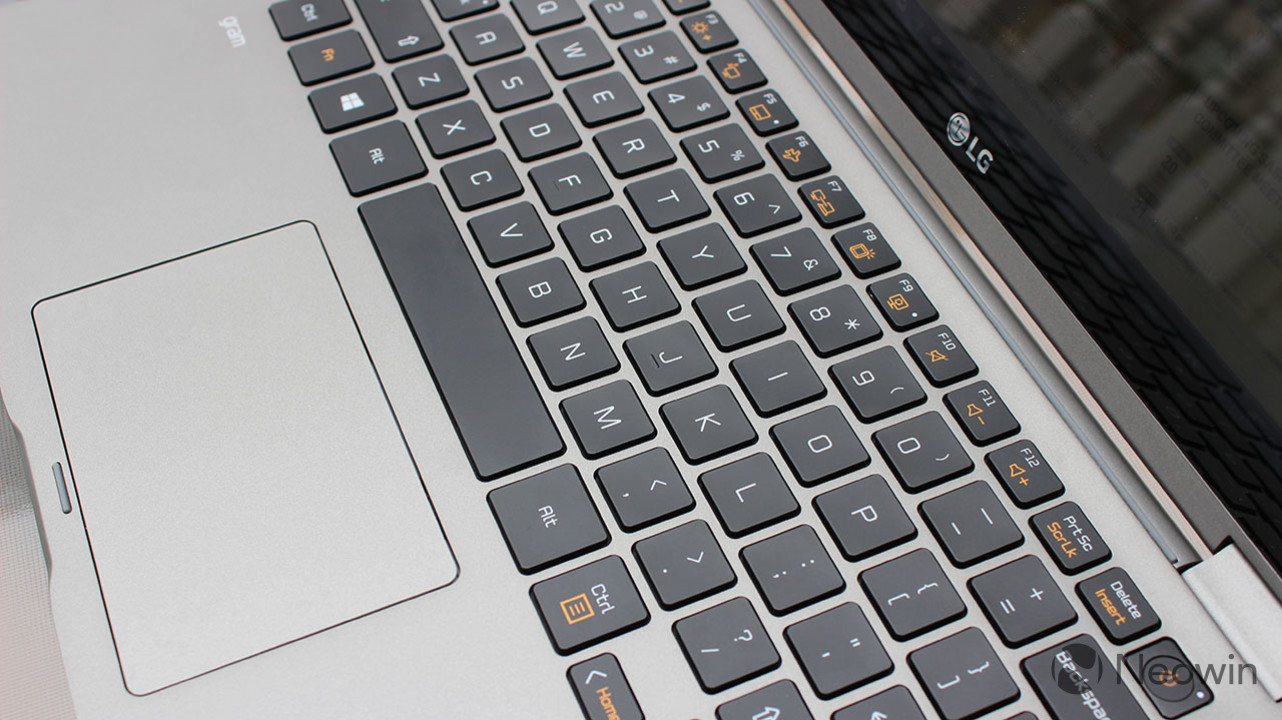 The keys feel a bit wobbly when typing, although this seemingly had no effect on accuracy while I was typing. Ultimately, I found the keyboard to be fine. Nothing more, and nothing less. I was impressed by the key travel though, another thing I'd have expected to be sacrificed in such a light machine. 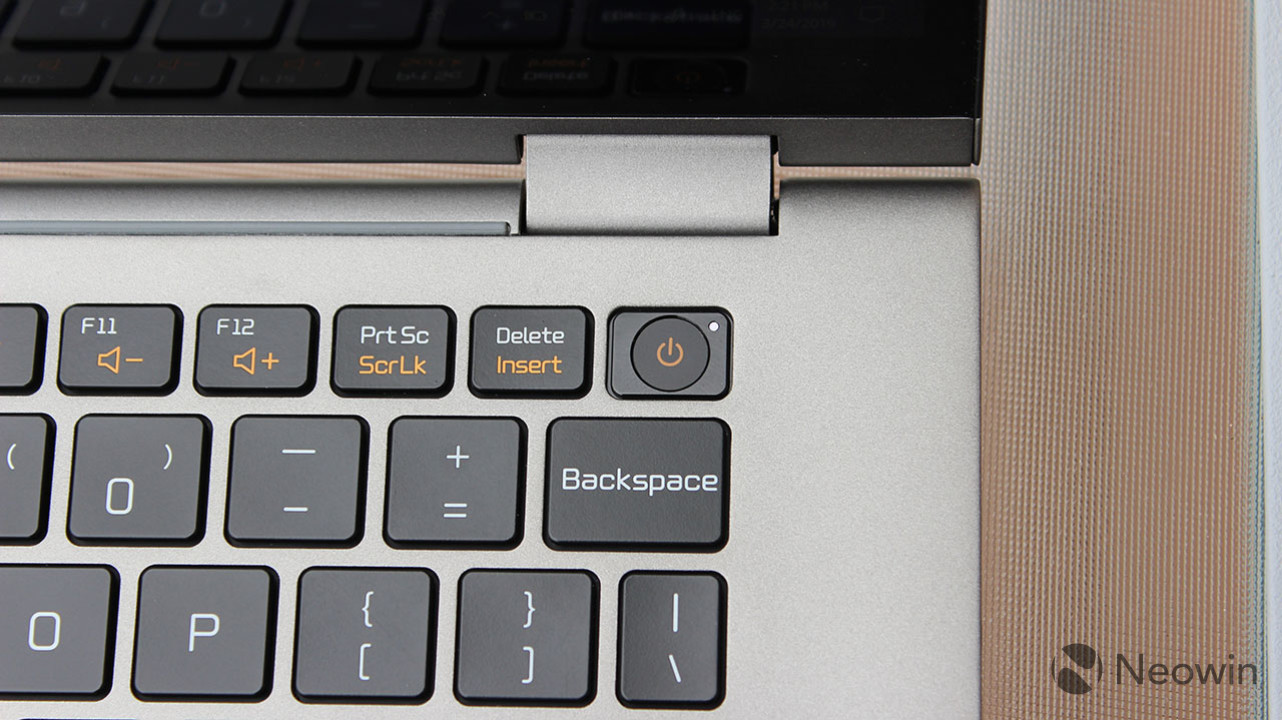 The power button includes a fingerprint sensor. Like Huawei's MateBooks, it actually scans your fingerprint when you power on the machine, rather than having to scan it again after it boots up. This can be a good or a bad thing, depending on how you look at it, although personally I love it. I think it's the only method of biometric authentication that's more natural than facial recognition on a laptop.

The bad is that some may view it as a security issue. Other companies like Dell include a fingerprint sensor in the power button, but you still have to scan after it boots up. That's because it takes a certain amount of time for Windows 10 to boot, so it's assumed that you may have walked away from your PC in that time. 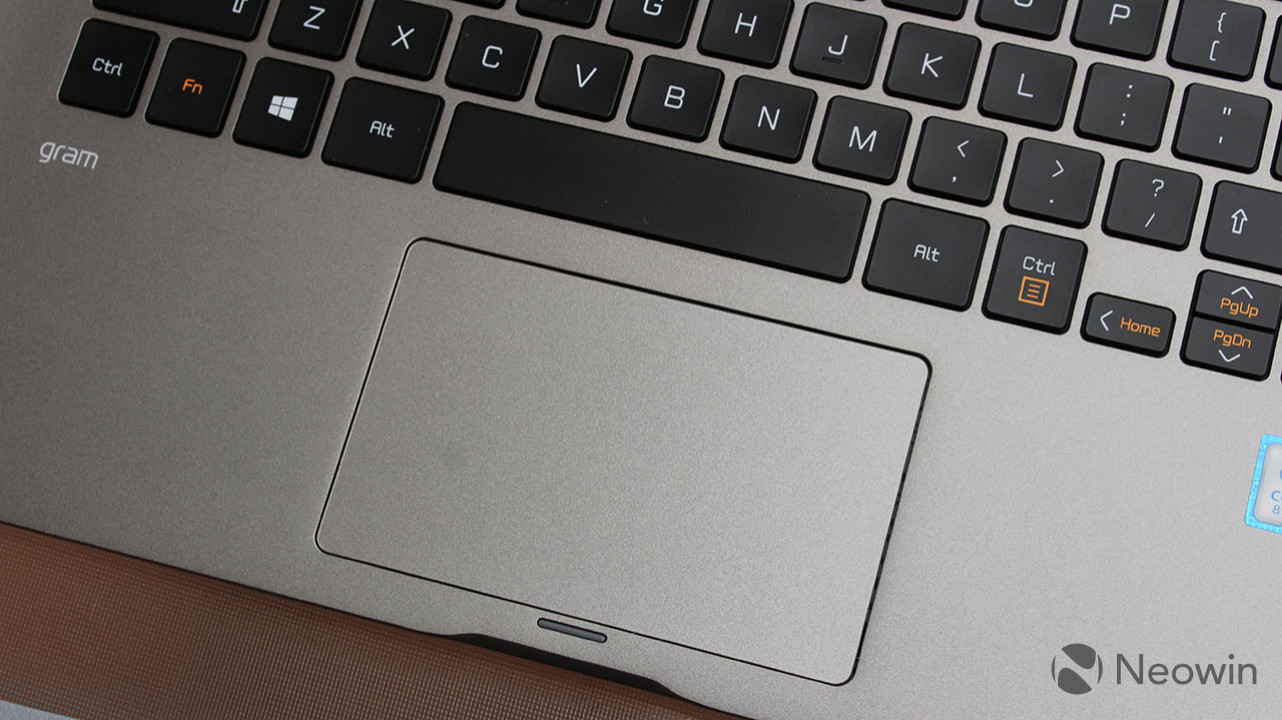 The Precision trackpad is clickable, another thing that I'd have expected to be compromised for a light device. It's also fairly large, which is nice. In fact, having a trackpad with Precision drivers again was really nice after recently reviewing the HP Spectre x360. It's accurate, and it's responsive.

All-in-all, the experience between the keyboard and the trackpad is pretty good. Windows laptops have improved a lot over the last five years, so even if I say something is "just fine", that's only because it's in comparison to the other stuff that's out there, which is phenomenal.

The LG gram 14 2-in-1 includes a Core i7-8565U CPU, which is from Intel's Whiskey Lake family. Interestingly, that's the only choice for the gram. As I said earlier, this PC comes in only one configuration, so the fact that it has an i7 should tell you that there's some emphasis on performance. After all, LG wanted to hit that $1,499.99 price point, and yet it still went with a Core i7 instead of a Core i5.

The Core i7-8565U is a quad-core CPU with eight threads and a 15W TDP, another thing one would expect to be sacrificed in a light machine. For example, the 5W Core i7-8500Y would have allowed LG to remove the fan. Y-series chips are sluggish though, and this review wouldn't have been as positive if LG went that route.

I've reviewed probably about a half dozen Whiskey Lake PCs at this point, and I'm happy to say that the performance is the same on the gram. For productivity-related tasks, it's fantastic. For more GPU-intensive tasks, it's doable, but not optimal, so you could do it in a pinch.

As for battery life, you'll get about eight to nine hours on a charge doing regular productivity tasks. If you venture into editing photos or videos, that battery life is going to go down. If you're going to work without a charger, you will be cutting it close. Luckily, you can charge the 72Wh battery with any USB Type-C charger, so you can grab a charger from someone that has a modern, non-Surface PC.

These are pretty much the same results that we've seen in other Whiskey Lake PCs. Next up is the Creative test, which checks GPU-intensive tasks like video editing, mainstream gaming, and more.

The Creative test shows that you can do these kinds of tasks, but this machine won't be the best at it. There are gaming PCs and workstations that can do a much better job of it. Finally, the Work test checks productivity-related tasks like writing and spreadsheets.

The Work test is always where the U-series Core i7 shines, as it's just better for productivity. You'll find that this CPU actually outperforms a 45W H-series chip a lot of the time.

As I mentioned, I also ran the all-in-one test in PCMark 10, for those that want to check out the results.

But it's not without its drawbacks. Despite the MIL-STD 810G certification, the materials do feel cheap and plasticky. The biggest problem, and the only major one that has to do with functionality, is that the display just isn't bright enough. Like many LG phones that I've used, it simply can't be used in bright lighting conditions, so if you're taking it on the go, you'll want to be aware of that. 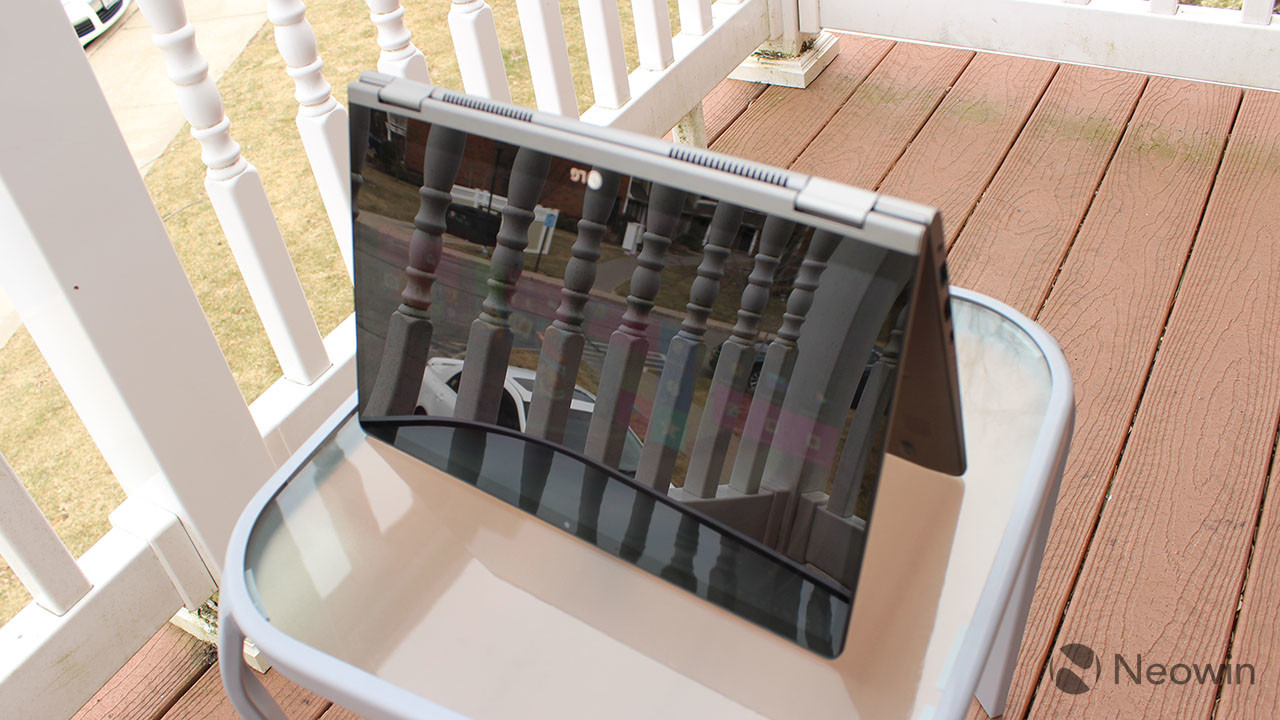 With all that in mind, it's a pretty solid machine. It ships with the pen, which you can use for drawing, taking handwritten notes, and so on. The convertible form factor adds another dimension to the functionality of the device, since you can use it as a tablet or in other form factors. And it's just so light, which is really the selling point here. If you're looking for a 14-inch convertible that you can put in a bag and just feel like nothing is there, then go with the LG gram. 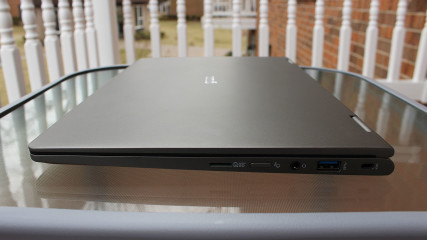 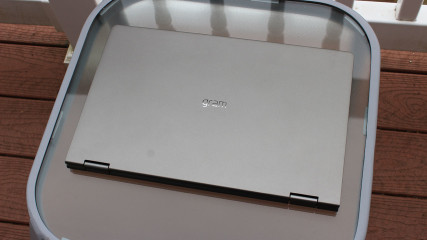 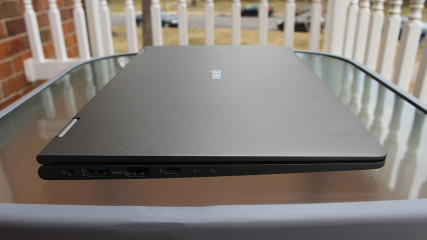 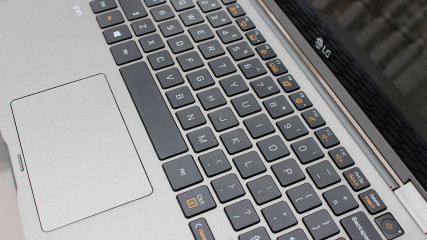 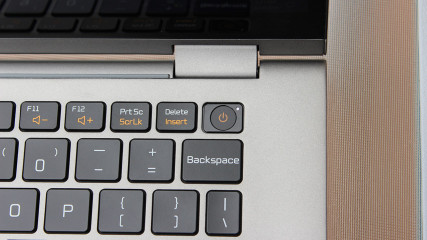 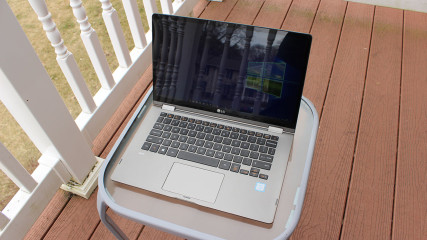 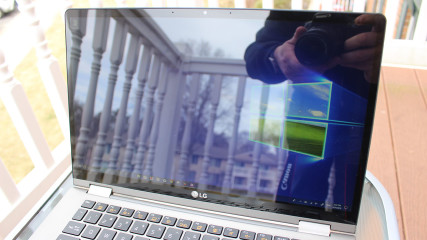 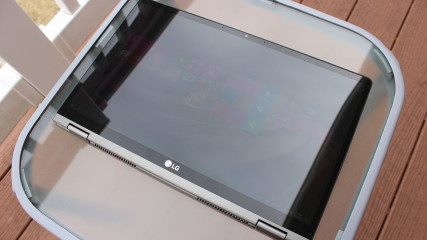 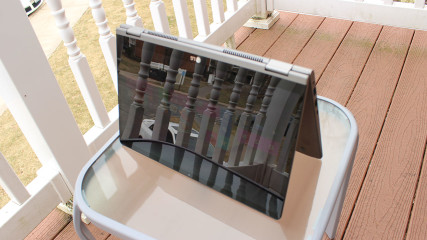 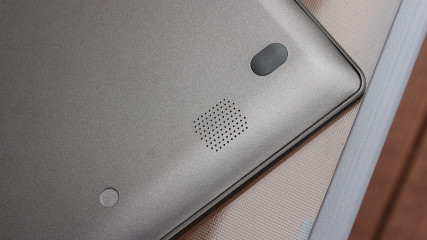 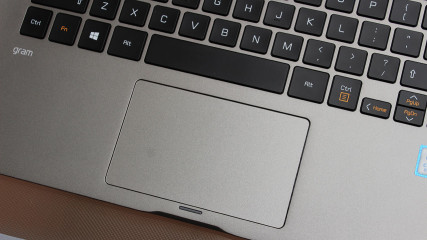 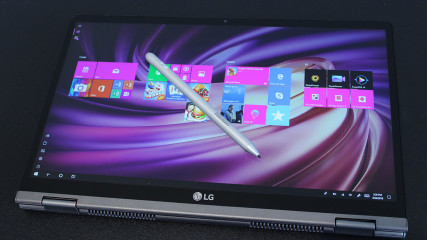 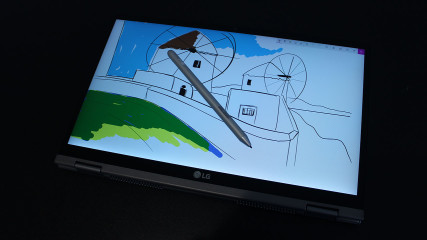 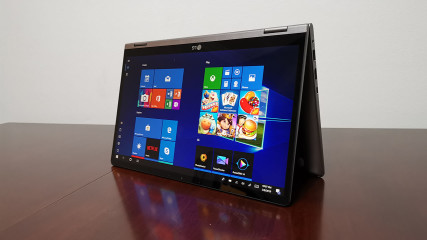 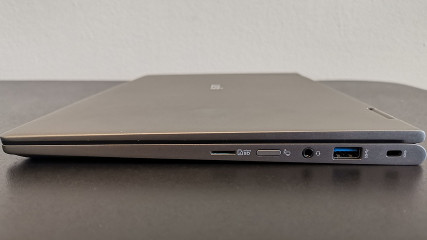 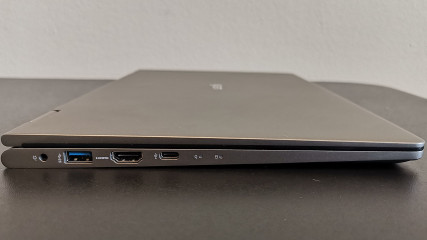