Microsoft's decision to drop its Windows Phone licensing fees has led to an influx of new brands getting ready to launch handsets running the mobile OS. But many of these new additions are targeting the entry-level of the market, including some very affordable devices from companies such as Micromax and XOLO.

Many of those awaiting a new flagship-class device have been looking forward to the launch of the Lumia 930, which Nokia announced at Microsoft's BUILD conference three months ago. Some retailers have already opened their pre-order books for the device, but it is still not officially on sale.

In the United Kingdom, one major retailer claimed to have the Lumia 930 in stock a month ago, and was selling it for the astonishing price of £1299, before withdrawing it from sale. But the long wait will soon be at an end, as the handset will officially go on sale later this month in the UK. 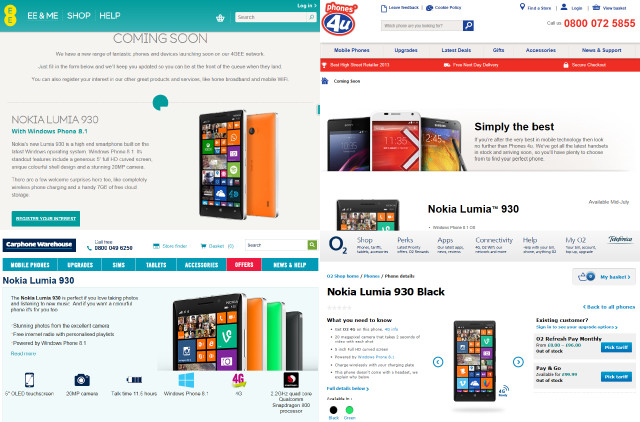 Leading independent retailers Carphone Warehouse and Phones 4u have launched 'coming soon' pages for the device, as have EE and O2. You can register your interest with them to be notified of when the device will be available to purchase. According to Phones 4u, the device will launch in mid-July. An EE customer service agent said that the handset will be available on that network "at the end of July", and said to come back "in a few weeks".

Conor Pierce, vice-president of Microsoft Devices for the UK & Ireland, said a few months ago that the Lumia 930 would arrive in the UK by "early July", so everything now seems to be falling into place for a launch in the next couple of weeks.

Every Lumia 930 will include a free DT-601 'puck-style' Wireless Charging Pad, to support the handset's integrated Qi wireless charging feature. In addition to this, Nokia said at a media briefing in April that there will be a special pre-order offer available to those in the UK, which will include a free DT-900 Wireless Charging Plate, an MD-12 wireless speaker (shown below) and a £20 voucher for the Windows Phone Store. With the two wireless chargers, speaker and voucher, Nokia says that the total value of freebies on offer adds up to around £130.

We'll be getting our hands on the Lumia 930 next week, so stay tuned to Neowin to find out more about the new Windows Phone 8.1 flagship.