The Anonymous hacker group is known for its symbol of a man wearing a suit with no head (sometimes a question mark hovers above the head). However, members of the group have also appeared in public wearing masks that are similar to ones that are sometimes worn in the UK to celebrate Guy Fawkes, who famously tried to blow up London's House of Parliament in the 17th century. The mask was later used by "V', the fictional character at the center of V for Vendetta, the 1980's comic book from writer Alan Moore and artist David Lloyd. The comic book was later adapted into a movie by Warner Bros in 2006. 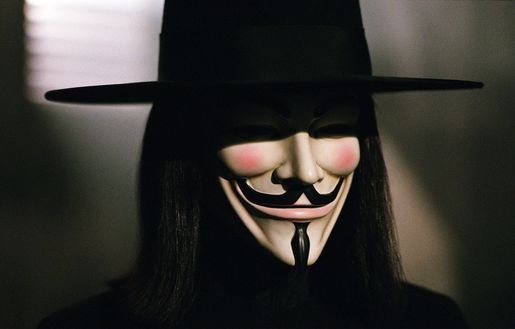 Now the New York Times has posted up an article stating that the image of the mask worn by the Anonymous protestors in public is in fact trademarked and owned by Warner Bros' parent company Time Warner. As a result of Anonymous' increased visibility, sales of the mask have jumped sky high and that means more money in Time Warner's pocket.

The article says that the mask is the highest selling in that category at Amazon.com. A rep for Rubie's Costume, which produces the masks, says it is the best selling mask the company makes with sales of 100,000 units a year. Anonymous members first started wearing the masks in public in 2008 when they protested outside of Scientology buildings. More recently members of the group wore the masks at a San Francisco rapid transit station protest.