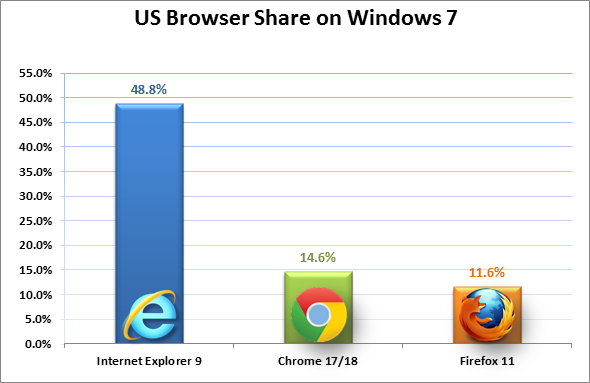 As they always do at the beginning of each month, Microsoft updated its official Internet Explorer blog today with its claims about the user base for its web browser. According to Microsoft, Internet Explorer 9 users on Windows 7-based PCs now comprise 48.8 percent of the web browser market share in the US. Google's Chrome is second with 14.6 percent and Mozilla's Firefox is third with 11.6 percent.

Worldwide, Microsoft says IE 9's market share for Windows 7 PCs is set at 34.5 percent, compared to 21.2 percent for Chrome and 13.1 percent for Firefox.

Overall, Net Applications claims that IE 8 is still the most used web browser worldwide with 25.40 percent of the market share, followed by IE 9 with 15.17 percent. Chrome 17 is shown in third with 14.73 percent. However, Google recently updated Chrome to version 18. Firefox 10 is in fourth place with 7.79 percent. As with Chrome, Firefox was recently updated to version 11.

Microsoft announced a couple of weeks ago that it uses Net Applications as the basis for these monthly reports and claimed that a competitor, StatCounter, provided less accurate results. As we exclusively reported in March, StatCounter questioned many aspects of Microsoft's data and called their arguments against StatCounter "one-sided."