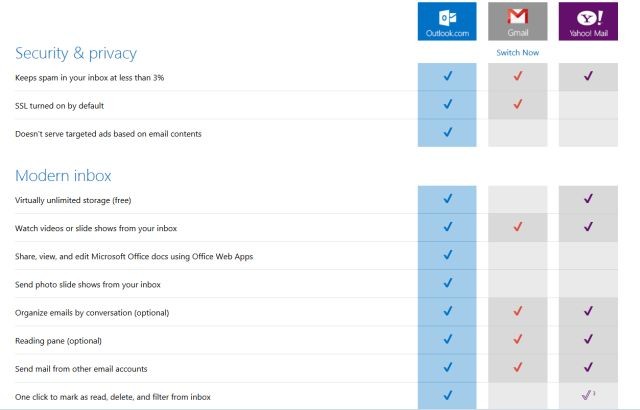 Microsoft officially launched Outlook.com earlier this week, but it also knows that there are still a lot of people who use its two main competitors, Google's Gmail and Yahoo Mail. As part of the new launch, Microsoft has a webpage that it says proves that Outlook.com is the best choice for web email access.

The page's chart shows, among other things, that Outlook.com users can share, video and edit Office-based documents via Microsoft's Office Web Apps. Users also have a way to email photo slide shows and a way to connect to Facebook, Twitter, and LinkedIn from an inbox. Microsoft claims that none of those features are available for Gmail and Yahoo Mail users. In fact, the only thing Microsoft's chart admits that Outlook.com can't do is support the IMAP email protocol.

There's also a little known feature that lets Outlook.com users get rid of all of the ads while using the site. The catch? It costs $19.95 a year. Paying that amount also allows users to always have their account active without the need to continue to log into Outlook.com

Microsoft has also posted up a page that shows how Gmail users can quickly transfer their account to Outlook.com. Finally, Microsoft has released a new video that gives the public a tour of the new Outlook.com features.