Google has just unveiled its first company-branded laptop, the Chromebook Pixel. The laptop comes with a 12.85-inch touchscreen that packs 2560 x 1700 pixels, giving it the highest pixel density of any laptop currently in production. Google officials claim consumers will never see a pixel with the naked eye.

The laptop is a premium product designed to compete with Apple's MacBook Pro. The screen especially lends itself to the premium feel, with colors appearing accurately. The screen also features a 3:2 aspect ratio, meaning its nearly as tall as it is wide. Google claims this is so web pages look natural, although it gives the laptop an odd look when next to any other laptop with a widescreen.

The Pixel also includes back-facing speakers, a thin backlit keyboard, vents that are hidden in the laptop's hinge and more. Google have obviously taken the MacBook Pro as inspiration, as the Pixel shares many of Apple's design ideas. The Pixel does not taper like the Pro, however, giving a much boxier look.

Google has also brought some of their own ideas to the Pixel – a third microphone resides above the keyboard to cut out typing noise during VoIP calls; the trackpad is very refined and the edges of the laptop are designed not to cut into your wrists when you're typing. These differences are, however, trivial. The overall aesthetic values of the Pixel are also shared by the MacBook Pro, giving it a rather "me-too" feel. 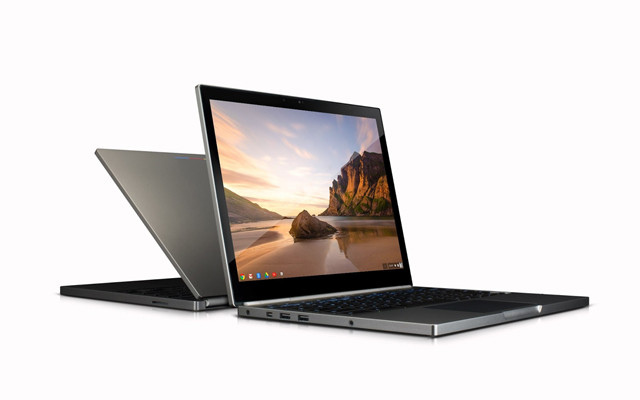 The Verge got some hands-on time with the Pixel and, according to their video, it is not a smooth device. Google tried to stress that the Pixel allows smooth navigation of the web; something developers can utilise when making apps for Chrome OS. Due to the excessive number of pixels, the Core i5 CPU from Intel paired with Intel's HD 4000 GPU, simply cannot cope. Google claimed that simultaneous 1080p videos can be played, but we disagree after watching hands-on footage. The Pixel also includes 4GB of RAM.

Ports-wise, the Pixel is frugal, coming with just two USB 2.0 ports, a MiniDisplay port, a combo 3.5mm headphone jack and an SD card slot. The Pixel also includes a 720p webcam with dual microphones. The device also comes with the usual array of WiFi support as well as Bluetooth 3.0.

Chrome OS did not receive an update to compliment the Pixel. Google is pushing developers to their Chrome Store, which is the only place to download apps for Pixel. Google showed off an app for the photo sharing site 500px, which was optimised for the new 2560 x 1700 display. Google also showed off a version of Quickoffice which lets Chrome OS users open Word and Excel documents from their browser. Additionally, the Google+ app has been updated (the update will be released in the coming weeks) and will allow Pixel users to take pictures off an SD card and upload them straight to Google Drive.

The Pixel comes in two variants: WiFi-only and WiFi with 4G. The 4G connectivity is provided via Verizon, with $10 a month getting you an unlimited plan. The Pixel's light weight, paired with the supposedly long battery life (5 hours, according to Google), would make it the perfect travelling companion – if other light, and fast, laptops such as the MacBook Air didn't exist.

Many are describing the Pixel as a browser with a laptop attached, which is a fair assessment. Compared to the MacBook Pro with Retina display, or even the MacBook Air, the Pixel falls very short. Chrome OS has very limited app support – especially beyond casual games – which hamper the user experience and usability of the laptop. The Pixel comes with 5 hours of battery (according to Google), far shorter than Apple's 7 hour estimates for the Pro.

Sundar Pichai, who oversees Chrome at Google, said: "We want to provide an option for those who demand premium hardware, those who are writing the next generation of applications," continuing, "I think people want to live in this world."