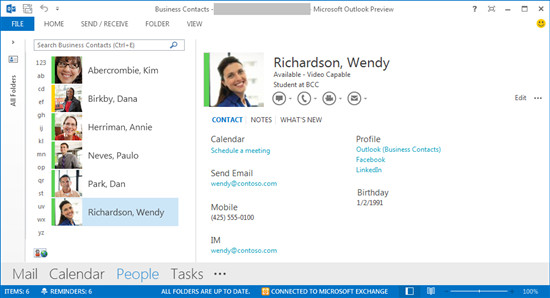 Microsoft signed off on the RTM build of Office 2013 in October but it won't be made available to the general public until sometime in early 2013. However, there are a number of features that have been put into previous versions of Office that won't be a part of Office 2013.

Microsoft has made a list of the features that won't be a part of its latest email and calendar program in a new blog post. Microsoft confirmed today that older .doc (Word 97-2003) and .xls (Excel 97-2003) won't have any importing and exporting support in Outlook 2013. The same goes for ACT! Contact manager files and Outlook Express archives.

Another feature that won't be a part of the new version of Outlook is the "Classic Offline" Mode for Microsoft Exchange accounts. The blog states, "Users in this configuration will be upgraded to Cached Mode when they install Outlook 2013.  For the vast majority of users this will mean no change to your Outlook experience." Also, Exchange accounts with Outlook 2013 cannot have their delivery location be a PST file.

If you like publishing your calendars for anyone to see on Office.com, that's changing too. In addition to removing that feature from Outlook 2013, Microsoft is also going to shut down that service for older versions of Outlook as well. Microsoft will reveal the timeline for this shutdown soon. Outlook 2013 also won't support searching for mail and calendar items in Windows Explorer or the Start menu anymore, in favor of searching inside Outlook.

VPN and dialup preferences won't be independently configurable for Outlook 2013 and Journal fans won't see that feature as a top-level module in the program. Microsoft has also removed the "auto-journal" feature. Finally, Microsoft has taken out the Contact Activities tab in favor of the Outlook Social Connector.